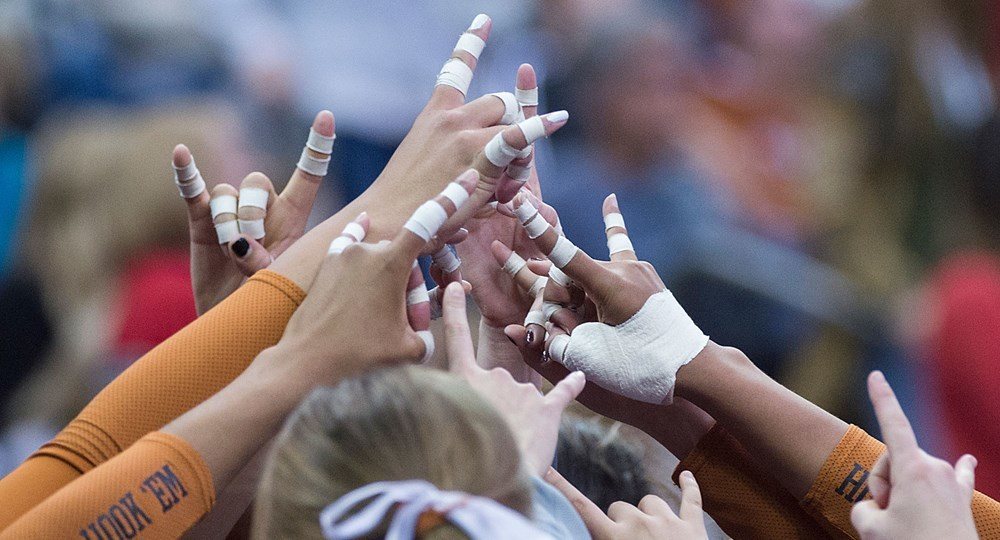 Two things are for sure about the setter position when the Texas Longhorns make their fall 2017 women’s volleyball debut: whomever... Archive Photo via Texas Athletics

At the end of last season, Texas graduated All-American setter Chloe Collins, who finishes her career ranked 4th on Texas’ all-time career assists list. That leaves the Longhorns with just 1 returning setter on their roster for 2017: sophomore-to-be Riley Fisbeck, who saw her first college action this spring during Texas’ exhibition schedule.

Fisbeck recorded 38 assists in 4 sets in the spring finale against North Texas. In the fall, she’ll be competing with the top freshman recruit at the position in the nation: Ashley Shook, who was ranked by PrepVolleyball as the #6 overall recruit in the high school class of 2017.

“(Riley) works so hard. I know how bad she wants to be good, so that’s awesome to see. We all have confidence in her,” libero Cat McCoy said in an interview with the Austin American-Statesman. “Ashley is an amazing setter. I think it’s going to be great for her to come in and compete for a spot from day one.”

Both players were high school All-Americans. Fisbeck is a Texas local and does have a full year training across the net from Collins under her belt to her advantage. Shook, from Illinois, is an elite talent who didn’t commit to Texas to sit on the bench for 3 years, however. She also comes from a Plainfield Central High School team where as a senior she set to a 6’4″ freshman outside hitter, so she’s not totally green to pushing the ball to college-sized pins. Shook wasn’t one of the two incoming freshmen who arrived on campus early for the spring semester, however.

Whichever player gets the nod will be the most important decision Elliott has to make this off-season for a team that has no holes otherwise in its returning lineup. With Freshman Brionne Butler, senior Chiaka Ogbogu, and junior Morgan Johnson, they’ll have one of the best blocks in the country. Sophomore Micaya White and Senior Ebony Nwanebu will match with late-season revelation Yaasmeen Bedart-Ghani for a lethal group on the outside; and that doesn’t account for the #1 recruit in the country and Gatorade National High School Player of the Year Lexi Sun who joins the team next season. Senior Cat McCoy will start her 4th-straight season at libero for the Longhorns.

That means that setter is the one spot that needs to be shored up – but fortunately, whomever winds up in that spot will have the benefit of setting to one of the best supporting casts in the country, who will erase a lot of ‘rookie mistakes’ that might arise.

“Ashley’s really, really good, and I thought Riley played her best match of the spring (against UNT),” Elliott said. “We just need to keep developing them and see what happens.”