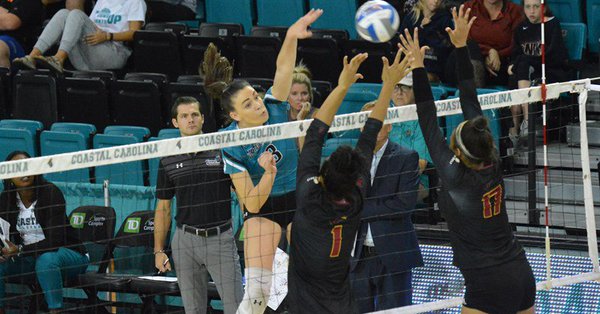 Senior libero, Sydney Alvis, picks up get second @SunBelt Defensive Player of the Week nod this season, after being honored once last season. Sydney leads the conference with 5.07 digs/set in Sun Belt matches. pic.twitter.com/Jro0fkXuIB

Emily DeWalt, Texas State (Fr., S, Helotes, Texas)
Texas State freshman setter Emily DeWalt amassed 89 assists (11.13/set), 22 digs (2.75/set), five kills and four blocks in leading the Bobcats to a pair of victories over Louisiana and ULM. DeWalt began her week with 51 assists and 18 digs in a thrilling five-set win over the Ragin’ Cajuns. She then tallied 38 assists in a sweep over the Warhawks. She hit .455 thanks to zero errors on 11 attacks.

Emily DeWalt of @TexasStateVball now owns the @SunBelt record for most weekly awards in a single season after being named Setter of the Week for the sixth time! pic.twitter.com/HNHPkhi8vx

Anett Nemeth, Coastal Carolina (Fr., OH, Pecel, Hungary)
Coastal Carolina freshman outside hitter Anett Nemeth led the Chanticleers to a trio of wins last week, averaging 3.80 kills, 1.30 blocks and 2.60 digs per set while hitting .210 and totaling 50.0 points. Nemeth opened the week with a 13-kill, 10-dig double-double at Georgia Southern and followed that with 11 kills and seven blocks in a sweep of Troy. She closed the week with 14 kills and eight digs against South Alabama.