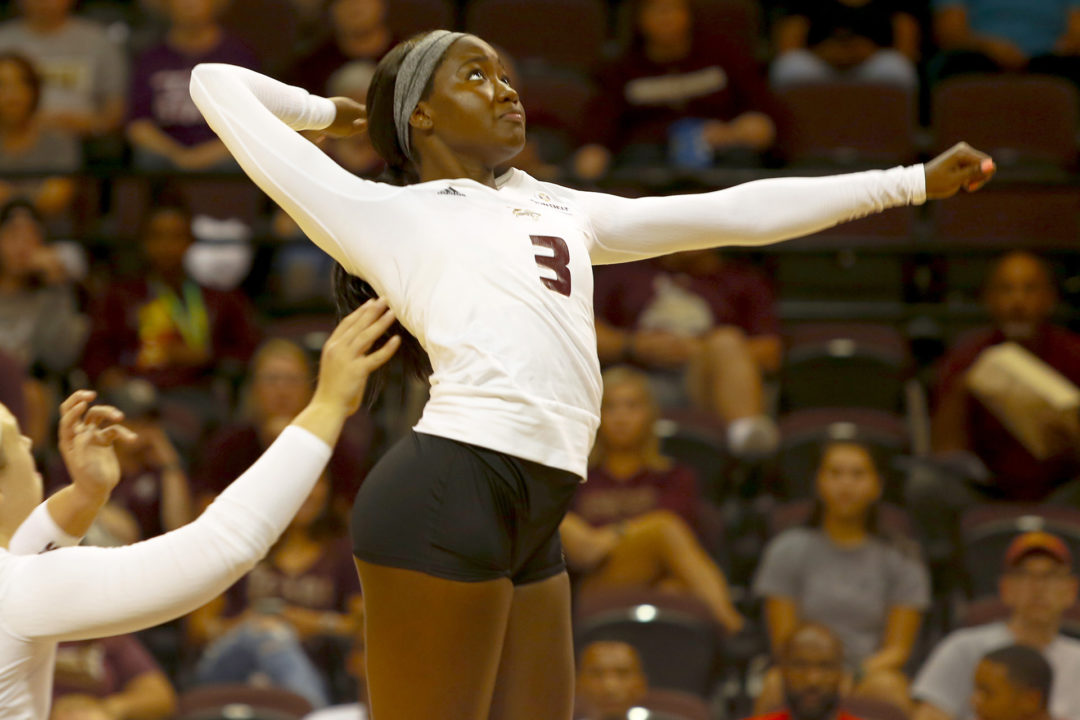 Sophomore Tyeranee Scott hit .900 (9 kills, 0 errors, 10 attacks) on the day to tie the school record for best attack percentage in a single match. Her mark equaled the exact same numbers put up by former Bobcat Jordan Kohl against Prairie View A&M on Sept. 4, 2015.

Nia Antoine led Louisiana with 15 kills, while Hanna Rovira added 11 for the home side. Milayne Danna (20) and Avery Breaux (18) combined for 38 assists, and Breaux tacked on 11 digs for a double-double. Sydney Davis finished with a team-leading 15 digs.

Texas State scored the first five points of the match and never looked back in a 25-17 first-set victory. The visitors stretched their lead out to 10-4 at one point, but Louisiana clawed back to within three at 12-9. Another 5-0 run saw the Bobcats increase their advantage to 17-9, and the two sides traded blows the rest of the way.

The tightest set of the day was won by the Ragin’ Cajuns at 25-22. There were 10 ties in the frame, with the last coming at 12-12. From there, Louisiana used a mini-run to take an 18-14 advantage. TXST got back within one at 21-20, but the home side was able to equalize after winning four of the final six points. Louisiana hit .394 in the second but posted a combined .143 attack percentage in the other three sets.

The Bobcats again found an early advantage and went on to close out the third 25-18. They jumped on top 10-6 and increased their advantage to seven at 14-7. They led by as many as nine at one point (20-11) before settling for the seven-point victory.

The maroon and gold finished off the day by claiming the fourth by 10 points. They never trailed and were able to turn a narrow 7-5 advantage into a decisive 16-8 edge thanks to a 9-3 run. Louisiana was unable to mount any sort of meaningful late charge as the visitors continued to increase their lead until reaching the final 25-15 summit.

The Bobcats will now return home from a 20-day hiatus away from Strahan Arena when they welcome Little Rock at 6:30 p.m. Sept. 28.