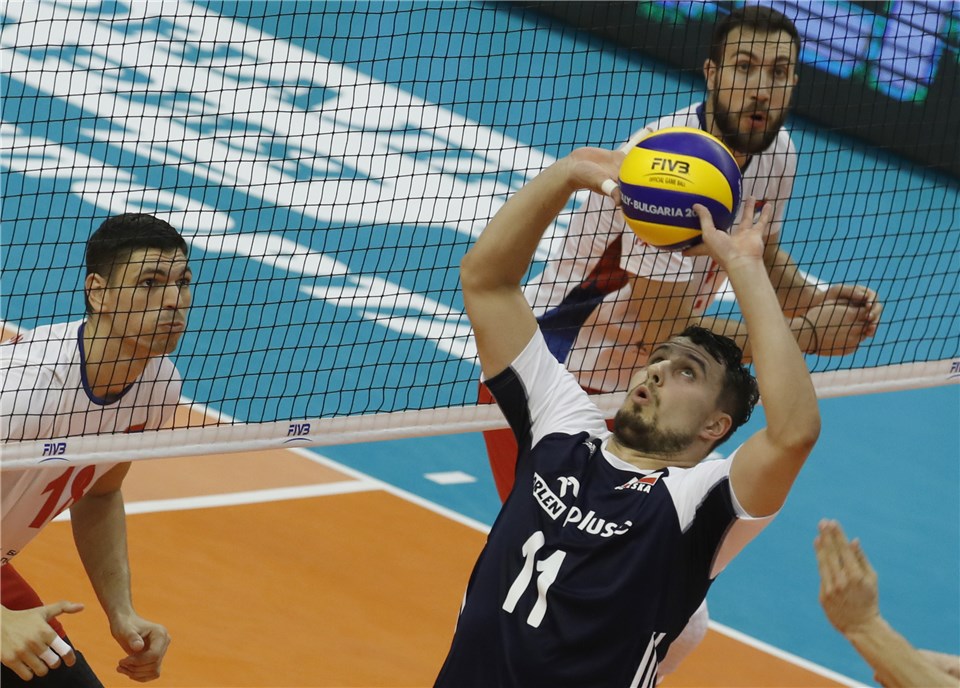 Fabian Drzyzga responded when Poland had its back against the wall. A sweep against Serbia sees them through to the Third Round.  Current Photo via FIVB

Poland sees themselves into the Third Round with a 3-0 sweep over a Serbian side that gave a rather pedestrian effort in an attempt to rest players for the next stage of the tournament. France looked impressive against Argentina, but it was not enough to qualify for the matches in Turin. Both Serbia and Poland qualify out of Pool H.

The win moves Poland into 1st place in Pool H and earned them a spot in the Third Round. Serbia dropped down into 2nd place, but are still progressing.

It is true that France needed Serbia to defeat Poland for them to have a chance to advance to Round 3. Though that would not matter if they lost to Argentina. Earvin N’Gapeth made sure that would happen with a 28-point performance in their 3-1 win. He posted a match-high 26 kills and contributed 2 points from the service line. Kevin Tille had a slow start (scoring only 2 points by the end of the 2nd set), but came on strong at the end to score 15 points. His points came from 14 kills and a block. Stephen Boyer scored 12 points from the right side on 12 kills.

Kevin Le Roux and Nicolas Le Goff both scored 8 points each in the middle for France. Le Roux put away 6 kills to go with a block and an ace. Le Goff chipped in 2 blocks to go with his 6 kills. Benjamin Toniutti, a setter, led the match in blocks with 5. He also set France to a 56.4% hitting percentage.

Argentina was led by a middle blocker, Agustin Loser. He led the team with 15 points and 4 blocks. The rest of his scoring production came in the form of 11 kills. Facundo Conte recovered a bit from a dismal performance on Saturday with 14 points on 13 kills and a block. Jose Gonzalez scored 12 points from the opposite with 10 kills and 2 blocks. Luciano De Cecco got the start at setter, but was replaced in the 1st set by Maxamiliano Cavanna. The combination of the pair accounted for a 43.9% success rate in attack.

Laurent Tillie, head coach of France, gave the impression that he knew his team had completed their run in the World Championships.“We are happy but not so much. We had too much pressure the last matches, the last day,” he explained. “We just tried to survive. It was difficult to stay in the game against Argentina today because we really wanted to win but at the same time it was difficult to find the rhythm. Luckily, in the end Ngapeth put the team on the right track and pushed us to the victory. I have no expectations regards to the match between Serbia and Poland, I am not going to watch it.”