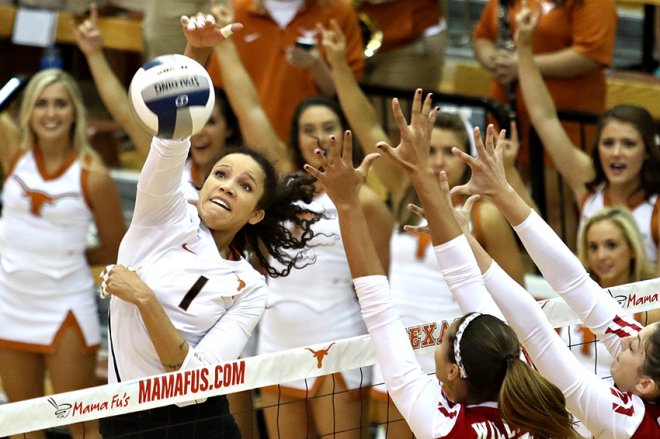 All-Big 12 Volleyball awards for the 2018 season were announced by the Conference office as Oklahoma, Texas and Texas Tech picked up individual accolades. Current Photo via Texas Athletics

All-Big 12 Volleyball awards for the 2018 season were announced by the Conference office as Oklahoma, Texas and Texas Tech picked up individual accolades.

Junior outside hitter White was named Big 12 Player of the Year for the first time after a season that included a team-leading number of kills (326), kills per set average (3.84) and a hitting clip above .300 (.305). White also earned two conference weekly awards throughout her junior campaign. During her first year at UT, White was named Freshman of the Year (2016), a season that consisted of eight Rookie of the Week honors. A Longhorn has now won back-to-back Player of the Year awards for the first time in four years.

She is the 11th Longhorn to earn the award.

Eggleston capped off her rookie season with the third-best kills per set average (2.89) and third-most kills (246) in the Big 12, amongst all freshman. She helped the Longhorns to a league-leading hitting percentage (.303), which ranks No. 3 in the nation.

Logan Eggleston is the Big 12 Freshman of the Year!

Three-time Big 12 Defensive Player of the Week honoree, Kinley, paced the Conference with a digs per set average that ranked No. 41 in the nation (5.12) and recorded a league-best 527 digs, No. 72 nationally.

Congrats to @missy_owens on being named Big 12 Co-Setter of the Year and First Team All-Big 12.