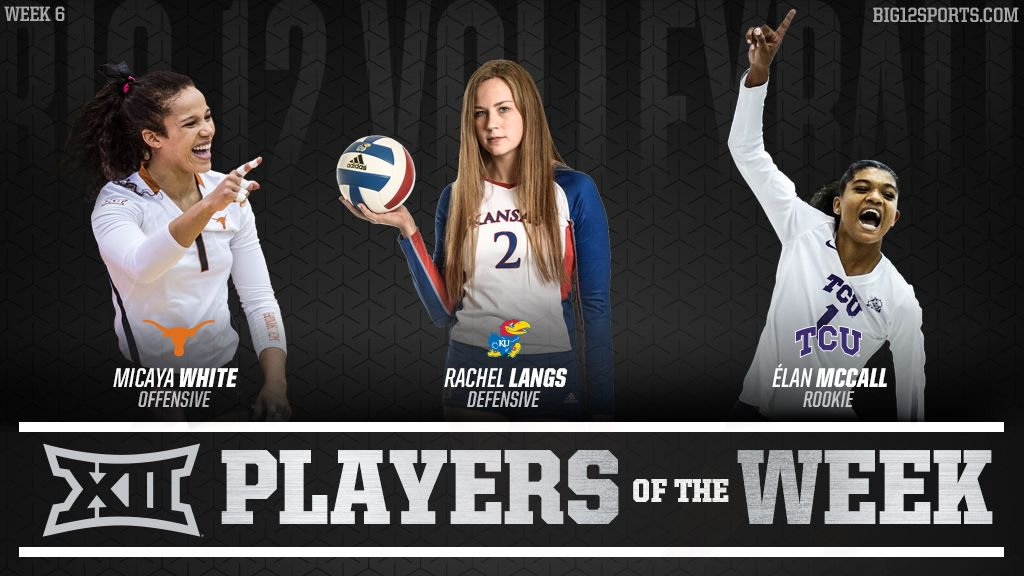 Texas outside hitter Micaya White, Kansas middle blocker Rachel Langs and TCU outside hitter élan McCall were tabbed as the Big 12 Week 6 players of the week.

Junior Micaya White has been named @Big12Conference Offensive Player of the Week after posting:

Langs notched 10 kills and a career-best 14 blocks, while hitting .350 in a five-set win against Oklahoma on Wednesday. The school record 14 blocks were the most since 2015 (12 by Tayler Soucie vs. LMU) and topped the sideout scoring record of 12 set by Anne Kreimer in 1998.

McCall recorded her fourth Big 12 Rookie of the Week nod, becoming just the 12th player in league history to do so. She is the second TCU player to achieve the feat, following Regan McGuire in 2015.

The rookie posted 21 kills, 13 digs and two blocks, while hitting .245 in the Frogs’ four-set win over Kansas State. That is an average of 5.25 kills and 3.25 digs per set. The double-double marked the eighth of the season for the Leander, Texas native. The 21-kill effort marked the fifth of the season for McCall.

.@Big12Conference Rookie of the Week honors once again belong to élan!