The Other American Lineup 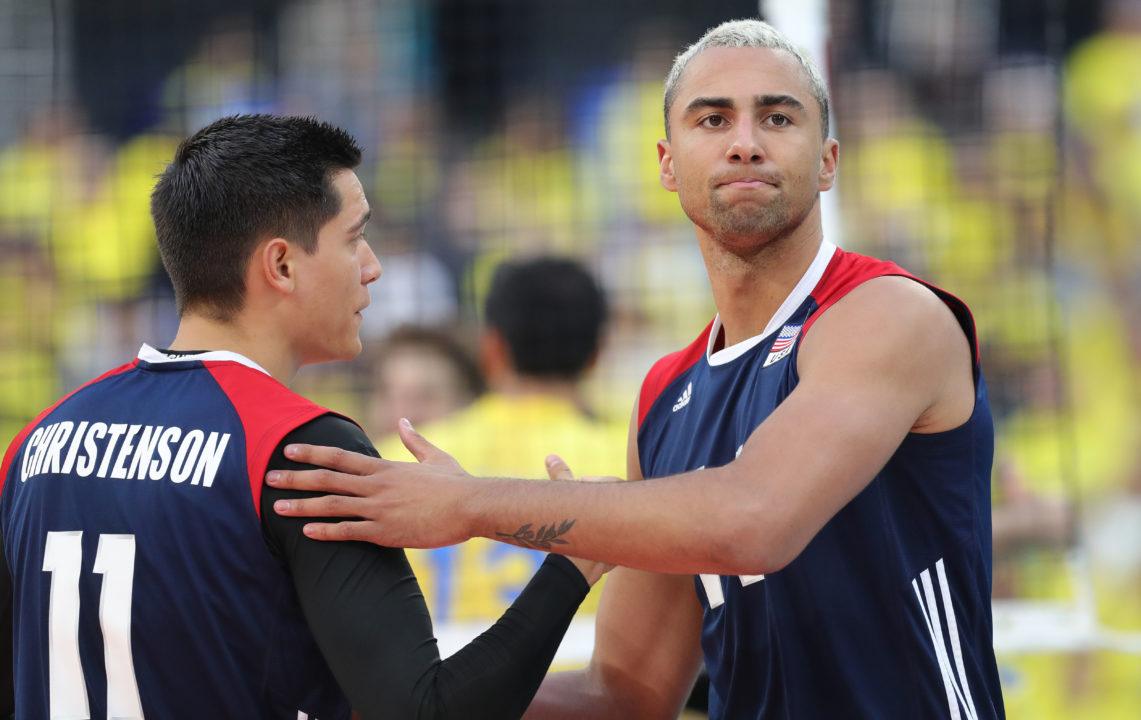 Perhaps firmly reminding fans that at its core, the USA Volleyball Cup, in spite of the pageantry and hype, are an international friendly, American coach John Speraw completely altered his starting lineup on the second night of back-to-back matchups with Olympic champions Brazil.

On Friday, he restored his confidence in college junior TJ DeFalco, who was used more-and-more sparingly as the World League went on. At the time, though, we supposed that there was another possible option, and that’s what Speraw did on the 2nd night.

The more obvious switch was that Micah Christensen started at setter in place of Kawika Shoji. The more significant was the shift of Matt Anderson to the outside hitter position. He’s versatile enough to play both hitting spots, though he’s more lately been an opposite for the Americans given their relative depth at the two spots.

“We want to put out the best lineup that gives us the best chance,” Anderson said when asked which position he prefers. “if that’s me playing on the left, playing on the right; I’ll do whatever the team needs me to do.”

In his spot at the opposite was the young Ben Patch, who showed off his potential and athleticism at the World League, but was also mistake prone, especially from the service line.

Part of the change was forced by Aaron Russell continuing to rehab his injured knee. Russell didn’t play in the 2nd game of the double-header, likely as part of that rehab process. The team is also without Taylor Sander, who is taking a break but figures heavily into the starting conversation at the outside hitter position.

The overall result was better for Team USA in game 2, pushing Brazil to 5 sets before losing an 18-16 thriller in the tie-break.

That result came in spite of the American serve getting even worse – they jumped up to 30 service errors and 8 aces as compared to 23 and 7 a night earlier.

Anderson was responsible for more of those service errors than any other American on Saturday (7), but on the other hand, he had a far greater success hitting from the outside rather than the opposite. On Saturday, he landed 61% of his shots and had a massive hitting efficiency rate of .555 (22 kills, 2 errors, 36 shots).

Patch, meanwhile, got plenty of opportunities at the opposite Saturday, with 9 kills on 26 swings. He did, however, hit into the block 7 times (more than the 4 by the rest of the American team combined).

When they’re truly at full strength, the Americans have every spot filled, but just barely. If we’ve learned anything this summer, the American A team is fragile. They are able to perform in fits and spurts, but don’t have an unbreakable lineup.

Team USA needs either Patch or DeFalco to emerge to cement their rotation. Right now, a full-strength Team USA probably has Anderson at opposite, because that’s where the least of the Americans’ depth is. But with Patch beginning his pro career at Vibo Valenti, he’ll have the opportunity to develop in the best men’s volleyball league in the world. That could develop Patch in such a way where he might bully his way into the full-strength squad.

He’s actually 3 years older than DeFalco (Patch’s career was delayed by a religious mission). The big unknown here is what DeFalco’s plans are for the future. The defending NCAA Player of the Year is rumored to be weighing a pro career and eschewing his final two seasons of collegiate play – which could dramatically shift his development curve.

These are the conversations that are made for the post-Olympic year. The Americans, while not at their best so far this year, are lining out well for next year’s World Championships. They’re getting experience for their young players, and playing in matches of significance and intensity.

The last big test of the summer will come at the FIVB Volleyball World Grand Champions Cup. There, the Americans will face off against a gauntlet of Japan, Brazil, France, Iran, and Italy in a double round robin. That tournament should bring some conclusions to a summer of experimentation – whether that be a conclusive lineup, or a conslusively-inconclusive lineup that says nothing will be decided for Worlds until next summer.