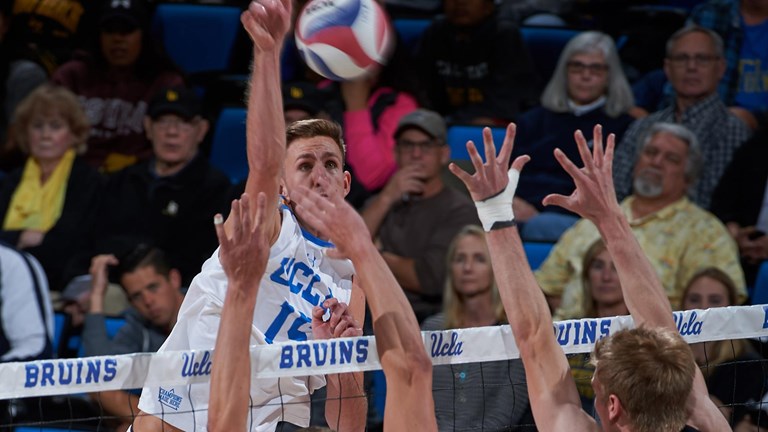 As the United States looks to earn its sixth Pan Am Cup title, the team will look to 14 players from 10 universities to get the job done, including three from national runnerup UCLA.  Current Photo via UCLA Athletics

As the United States looks to earn its sixth Pan Am Cup title, the team will look to 14 players to get the job done.

The Americans, which most recently reached the podium in 2014 (silver) and last earned gold in 2012, will be under the leadership of setter Jonah Seif, who has been selected as team captain.

In addition to Seif, the team includes five other players who were on the 2017 Pan American Cup team, which finished fifth: Price Jarman, Mitch Stahl, Arvis Greene, Jake Arnitz and David Wieczorek.

Pepperdine men’s coach David Hunt will act as head coach for the team, which will play Aug. 28 to Sept. 2 in Cordova, Veracruz, Mexico. Joining Hunt on the coaching staff are UCLA assistant John Hawks and USC assistant Greg Walker.

“I talked a lot with John Speraw about not just where guys are right now, but who could help the senior team in the future,” Hunt said. “This is an opportunity to see some guys who haven’t played a lot in a match environment.

“We have a lot of size and physicality. So far, we’re showing to be a pretty good blocking team. Our challenge is going to be our ability to side out against teams that run something different than we’re used to. But I’d rather be in our pool than an easier pool and have to go from zero-to-110 in the quarterfinals and semifinals.”

The American men are in a pool with defending champion Argentina, Puerto Rico and Peru.

The 14-person man roster is below.