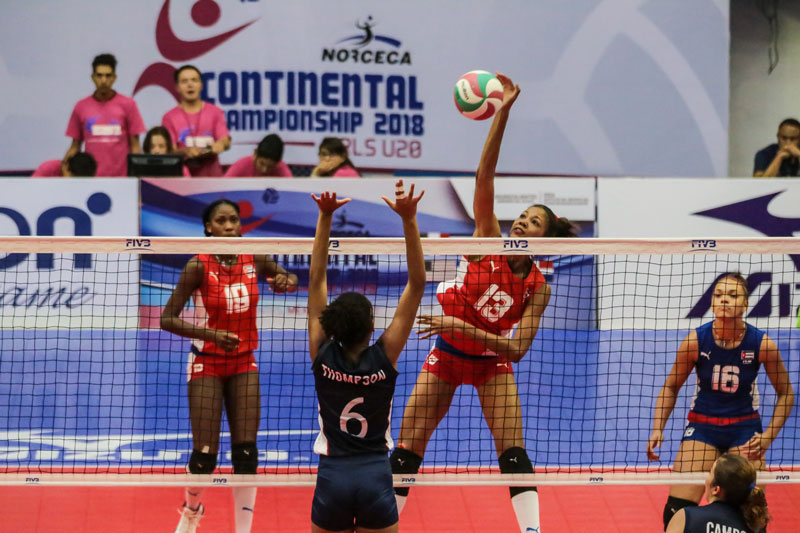 Cuba moved on to the semifinals and was later joined by Mexico as USA and the Dominican Republic awaited. Archive Photo via NORCECA

Although this match ended in straight sets, Cuba was pushed by Costa Rica with every set ending in five or less points for the deficit. What pushed the Cubans over the edge was their block (9-4) and attack (40-27) despite a strong serving effort from Costa Rica. Susan Alpizar Campos (nine points) led the losing side while a trio reached double-digit scoring for Cuba led by Yamisleydis Viltres Pacheco (12 points). Cuba now moves on to the semifinals while Costa Rica will move on to the fifth-eighth place bracket.

Cuba head coach Regla Torres: “I am not satisfied with today’s performance, I did not like it. My team and every Cuban team have better rhythm, a higher level, powerful and with better attitudes. My assistant Marta and I, as former players, can’t inject the girls the desire to execute everything we’ve prepared and practiced. We hope they will understand what’s needed. We are in semifinals but we must play differently.”

Costa Rica head coach Andrés López: “I am glad despite our loss, but as a group, going back to my Federation, I reached my objective. Today my starters in every set were the tallest players and that helped us against Cuba’s strength over the net. I think that Cuba came in tired from their previous matches that were really tough and we worked them well with our strong serves. Central America doesn’t have this level, so when the match was really close, we miss 3 points, we recover, we even the score and our competitive level is not enough, neither physically nor mentally speaking, there’s nothing left to do. We don’t know how to solve. We could compete better if we had better preparation matches.”

The tournaments’ host will move on in the winners bracket to the semifinals while Puerto Rico is sent to the losers bracket to compete for a maximum of fifth place. Despite the loss, Puerto Rico was the better blocking unit and held close to even in serving. However, the Mexican attack and massive amounts of team errors for Puerto Rico led to their demise. Uxue Amaya Guereca Parra (14 points) continued to be an absolute star for her unit too, leading either team in points – although her teammate Melanie Guadalupe Parra Quintero (14 points) tied her up.

Mexico head coach Luis Alberto León: “I was expecting to win, but not in three sets, I was optimistic because my team fights and has worked hard. Against United States, I believe we can perform the same way or even improve, because we do better with their high spiking and our system is defensive and we try to keep the in action. I hope there will be no delays like today and yesterday, you lose confidence and the day is too long.”

Puerto Rico head coach Rafael Olazagasti: “I am not happy, I knew it was going to be a tough game, Mexico performed well, they attacked strong and we weren’t passing during the first two sets, and if your passing is off you can’t attack in the middle, you can’t open opportunities. We need to learn how to close sets and Mexico did, we didn’t. Mexico was our direct opponent, there are three teams here, United States, Cuba and Dominican Republic are the strongest and for us it’s up hill.”