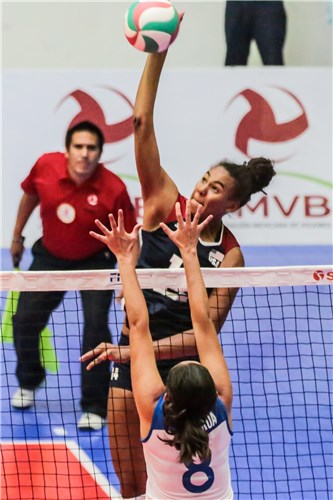 Logan Eggleston led Team USA as all four winner swept on the opening day of the 2018 U20 NORCECA Continental Championship. Archive Photo via NORCECA

Cuba’s block came to play in their opener with Guatemala, out-dueling the losing side 13-1 in that category alone. That contributed to a difference in kills as well, where Cuba led the stat 38-26. Despite the lack of productivity in power, Guatemala still wound up with nine more team errors as well in what amounted to a blowout Cuban victory led by Ailama Cese Montalvio (14 points) and captain Thalia Moreno Reyes (12 points).

Cuban head coach Regla Torres: “I wasn’t expecting to start so badly. This team hasn’t played this year. They were putting pressure on themselves and so was I being my first time coaching a team. I hope to improve in tomorrow’s match”. About her new role as coach, “I retired because I didn’t want to play anymore, so I feel good about my decision. I am pressured because I don’t want to make mistakes, like the one I did in the first set”. About her team, “we are well prepared, but today our spikes and serves were way below our level, our defense was poor because we were off position.”

Guatemalan captain Carmen Gómez: “We gave all we got, we weren’t intimidated by their height or strength, it was a good opening match. Our best feature was in serves, we were able to put Cuba off balance and we never gave up. Our reception was bad and we must improve in that matter.”

It’s tough to gauge the world rankings in a U20 classification since there is plenty of roster turnover every year or two, but USA would have actually been the underdog per that. They showed they were nothing of the sort, by winning the match 75-41 in total points with a dominant attack (30-14 in kills) and serve (12-2 in aces). Logan Eggleston, who graduated high school early and will play with Texas in the fall, was unstoppable with 15 points in just three sets.

United States captain Logan Eggleston: “Our high hitting, consistency, good energy and overall performance helped us finish on top. Our team chemistry is really good also; we are working well and supporting each other. In set two our strong serves and good passing made a difference.”

Puerto Rican head coach Rafael Olazagasti: “This was our first match and my players were really pressured; I have control of the ball and I don’t pass nor serve. We committed 13 errors in the first set, 15 errors in the second set, and you can’t expect to win like that. This is a group of new players; we have only 3 with some experience. My team will gain confidence facing Guatemala because we are similar and I believe we can execute our game plan. We want to continue preparing throughout the year, the team will learn from this experience and it will contribute to their development.”

The defending champions in this event got off on the right foot by sweeping Costa Rica. They were the stronger side in all three main categories of attacking (31-23 in kills), blocking (9-5) and serving (9-6 in aces) and even had 12 less team errors. The Dominican defense held every player from the Costa Rican side to six points or less, while a trio of players for the winning nation notched a baker’s dozen points to carry the scoring.

Dominican Republic captain Natalia Martinez: “We are happy with the victory and that no one was injured. I believe we could have been much better and we need to be more effective for tougher matches. In the third set we fell into Costa Rica’s rhythm, we were lazy and committed to many errors.”

Costa Rican captain Edya Espinoza: “We had a better attitude in set three, allowing us to move closer in scores because our setting was more effective. Costa Rica defended well against the world’s sub champion, they are very good. We must improve our attitude.”

Playing in front of their home crowd, Mexico dominated Honduras to the tune of 75-35 in total points with an amazing two sets ending in single-digits. The Mexican side looks ready to threaten the other contenders in this event after they showed an elite attack that doubled Honduras in kills (38-19) and was carried by a three-headed monster of Uxue Amaya Guerece Parra (15 points), Grecia Esther Castro Lopez (10 points) and Melanie Guadalupe Parra Quintero (nine points).

Mexican head coach Luis Alberto León: “The competition helps us to improve with each opponent, from weakest to toughest; our next opponent will ask more of us tan today which allows us to improve in rhythm and stability. We were able to use all our players; we are preparing to fight harder.”

Honduras captain Nathaly Pérez: “This is our first continental championship; it was difficult to get into our usual rhythm. This is a great opportunity for us and we hope to perform well y prove that we deserve to be here. Mexico’s blockers were very effective and they communicate well, their back row offense works well and we have troubles defending in that zone. We must improve a lot, we have to be more aggressive in serving and we will keep on using all our efforts. It won’t be easy facing the number two team in the world.”