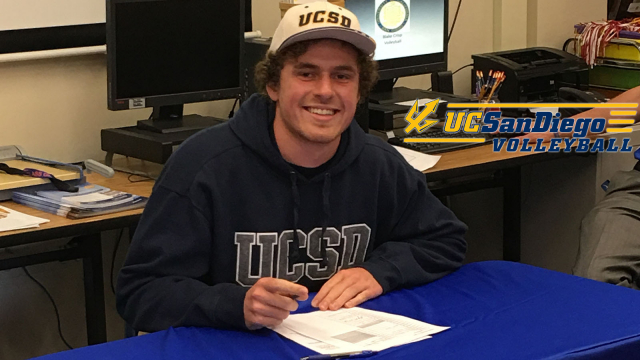 Crisp, a setter out of Westlake Village, will be joining UC San Diego for the 2019 season. The exciting 6-foot-3 prospect is currently a senior at Westlake High School. A starter since his freshman year and a captain since he was a sophomore, Crisp set the Warriors to a second successive Marmonte League title as a junior, posting an unblemished 8-0 mark among a 22-5 overall regular-season record. He earned All-Marmonte League First Team distinction in both 2016 and 2017, and was named Team MVP for the latter.

“Blake is an athletic setter with great touch on the ball and a high volleyball IQ,” said Ring. “He is accomplished both indoors and on the beach. His demeanor on and off the court, as well as his competitive drive, will prove to be great additions to our program as we play in the Big West Conference and transition to Division I.”

Crisp’s Westlake was ranked as high as No. 5 heading into the 2017 postseason in the extremely-tough CIF Southern Section Division 1. The Warriors were runners-up to a formidable Corona del Mar squad at the Karch Kiraly Tournament of Champions in Santa Barbara late in that campaign, with Crisp chosen to the All-Tournament Team. He dished out 39 assists in an April 8sweep of rival Calabasas that effectively clinched the Marmonte crown. Crisp added 51 in a thrilling, five-set CIF quarterfinal loss to Newport Harbor on May 13. Westlake rallied from two games down before succumbing in the decisive fifth set, 15-8.

Crisp plays his club volleyball for SMBC. For three straight years from 2015-17, he made the top A1 Red Team at the USA Volleyball High Performance event.

Involved in the national-team program at the developmental level, Crisp is also an able beach volleyball player. He participated in the California Beach Volleyball Association (CBVA) Tour in 2014, and has helped Westlake to two Marmonte League crowns. In the classroom, he boasts a 3.9 grade-point average.

The upcoming 2018 season marks the beginning of a new era for UC San Diego in the Big West Conference, which has added men’s volleyball as an 18th sponsored sport. The Tritons open the new campaign at UCLA’s Wooden Classic Tournament, taking on McKendree (IL) on Friday, Jan. 5, and King (TN) on Saturday, Jan. 6, with first serves set for 5 p.m. inside the John Wooden Center.