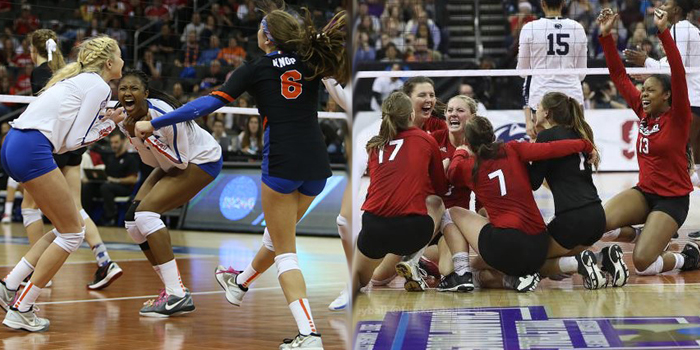 Florida and Nebraska square off with the National Championship on the line in Kansas City. Archive Photo via Florida Athletics/Tim Casey and Nebraska Athletics 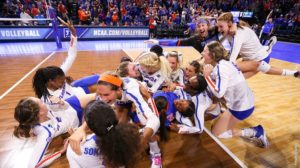 Check out our set-by-set match notebook from Nebraska’s win over Penn State in the National Semifinals.

Inside the action itself should be an intriguing matchup too between arguably the best defense in the country against arguably the top passing and serve receive team in the nation. How about some more keys and team strengths though? Let’s get into it below:

The Gators led 2-0 in sets over Stanford but lost all of their momentum as Stanford forced a fifth set. That’s when the Florida seniors stepped up, just as they had when trailing to match point in the Elite Eight to USC. There’s no other way to describe that senior class than the way head coach Mary Wise oogled over their impact and how she would never have another class like it.

It’s not just senior leadership and togetherness that define this team, but it’s the skill and talent of those senior as well. The big four are Rhamat Alhassan, Carli Snyder, Shainah Joseph and Caroline Knop. Alhassan was unstoppable in the five-set win over Stanford too and both her and Snyder combined for six kills in that final, shortened set to 15. Knop also made big plays defensively while Joseph has been a steadying and seemingly unstoppable force on the pin with an insane vertical. The combination of it all is that Florida gets production and leadership, and shouldn’t waver in having to play what will essentially surmount into a road match.

The Gators might just have the best defense in the entire country, as they have play-makers at every level and can make life on opposing offenses difficult. They’ve prevented three top 10 opponents in Kentucky, Texas and Nebraska from hitting over .170. It wasn’t their strongest defensive match vs. Stanford as they hit .253, but considering the Cardinal hit over .320 on the year that’s a pretty good mark for the Gators.

They do it with blocking, where they rank in the top 10 of the country and in the back row as Snyder is strong in her defensive floor game. It also helps to have a libero in Caroline Knop who earned AVCA All-America Honorable Mention honors. The blocking also comes with a myriad of different options as Alhassan, Cheyenne Huskey and Rachael Kramer all average over a block per set and give them a multitude of options no matter the rotation.

The Huskers might be the best passing team in the country, as they might have the most effective service unit too if you take into account their serve and serve reception. Considering that the Huskers have a great setter and plenty of attacking options, being in system and getting a strong first pass can mean a quick point. As good as they have been at passing, that happens a lot. It can also neutralize a strong serve from the opponent to a certain extent.

It’s easy too at this stage in the season to be nervous and have some struggles from playing in the big moment. Having that strong passing and serve reception can be a calming force though and settle things down. It should help that the Huskers will essentially have a home match, with likely a big majority of the crowd at the Sprint Center dawning red.

As good as Nebraska has been this season, their depth is still incredibly young throughout the roster. They do have five seniors with four starters, but that blend of youth and experience has been eased by Kelly Hunter who is the perfect representation of the gritty play that Nebraska instills. When you add in the passing and her setting, it can make Nebraska very hard to stop.

She does so much on the court. For instance in the Huskers win over Penn State in the Final Four, she racked up 23 digs and six blocks. She also had the final point of the match on a kill and can be aggressive at times to go with her strong setting ability. Hunter was absent due to injury in the Huskers last meeting with Florida, a loss in the first week of the season. Nebraska really took off when she came back from that injury as Big Red should be a much different team this go around led by Hunter.

It was actually Alhassan’s middle blocker mate Rachael Kramer with the big match in the last meeting of these two, as Kramer logged 20 kills (.679) compared to eight (.172) for Alhassan. She did total eight blocks though, but will be counted upon to have stronger offensive numbers. Nebraska has done well in slowing some of the nation’s top middles such as Alhassan and Haleigh Washington for Penn State, but Alhassan is rolling into this one off of a 17 kill (.517), four block performance in the win over Stanford.

In the first meeting with Florida early in the year, Foecke led Nebraska with 18 kills and added 16 digs, four aces and four blocks. She filled up the stat sheet on Thursday night too with 19 kills, 19 digs and three blocks in the win over Penn State. The big moment doesn’t faze her as she won the NCAA Tournament’s Most Outstanding Player back in 2015 as just a freshman. She should be a steady force once again in this one.

How does Florida beat Nebraska?

The Gators struggled mightily against USC in the Elite Eight passing and in serve receive, but found just enough life late to move on. The passing was night and day in the Final Four match vs. Stanford and sure enough Florida looked more impressive in earning the victory. This key becomes even more important in this one though because while Stanford can be aggressive and strong at times serving, it ramps up with Nebraska who has one of the best serving teams in the nation. If they have another clean passing match, they will do better offensively and be able to establish their dynamic middles, Alhassan and Kramer, more often.

Add to it that the defense should at least slow Nebraska enough to win as long as they can pass well, which will be the biggest key and question.

How does Nebraska beat Florida?

The inverse of Florida’s key to winning is Nebraska’s key to winning: continue to serve strong and pressure the Gators’ passing. The Huskers have been great in every aspect of the serve game this season and hit several big spurts vs. Penn State behind a dominant serve. Knowing that Florida has had bad spurts of passing this season, it’ll be important for Nebraska to let it rip and be aggressive. Now, there’s always a fine line between being aggressive and having some serve errors versus going overboard and being inaccurate, but it’ll be key to not let that serve error number dictate their aggressiveness.

The Huskers offense will definitely be challenged by the Gators defense, but the two equalize enough that whoever wins the serve/reception game is likely to win the match.