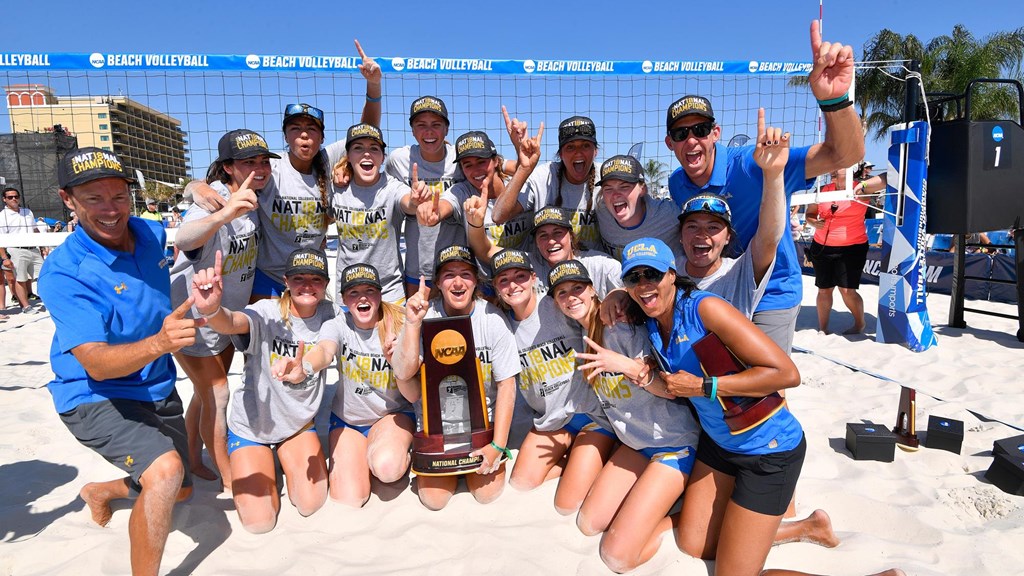 When UCLA fought all the way back from the elimination bracket on Sunday to beat the red-hot Florida State Seminoles and win their first NCAA Championship in beach volleyball, it marked a new era for UCLA beach and the sport. This became the first time since the NCAA began sponsoring a championship in beach volleyball in the 2015-2016 season that a team besides USC won the title; in fact, the Trojans also won the 2015 title, which was the last sponsored by the AVCA before the NCAA took over the next year.

#1 for the UCLA beach team, however, counts as #116 for the university as a whole, which ties them with Pac-12 foes Stanford for the most NCAA titles in the 112-year history of that organization. USC ranks 3rd with 104 titles, with a significant drop off thereafter down to Oklahoma State (which doesn’t sponsor beach or indoor volleyball) with 51 Division I titles. Division III Kenyon has 60 titles for 4th-most overall.

Note that the ranking only includes official NCAA titles, meaning that sports like equestrian, Division I FBS (formerly 1-A) football, and women’s AIAW championships prior to the NCAA recognizing women’s athletics in the 1980s, don’t count.

Ranking by overall titles becomes tricky math, because of certain years having different champions recognized by different newspapers or governing bodies, but one measure has UCLA in the lead in that category with 135, followed by Stanford with 129 and USC with 126. Penn State, including 7 women’s indoor titles and 2 men’s indoor titles, ranks 4th on that list with 84 titles.

UCLA, thanks in large part to their 19 men’s titles, remain on top of all-time Division I volleyball titles from the 3 disciplines (men’s indoor, women’s indoor, and beach) combined. They’ve won 4 women’s titles, 19 men’s titles, and now 1 beach title, making them the second team to have at least one of each, with their arch-rivals from USC being the first (4 men’s, 3 women’s, and 2 beach).

This is false. USC Men’s Indoor has won 4 NCAA championships. As much as I cringe, USC was the first to win in “all” disciplines.