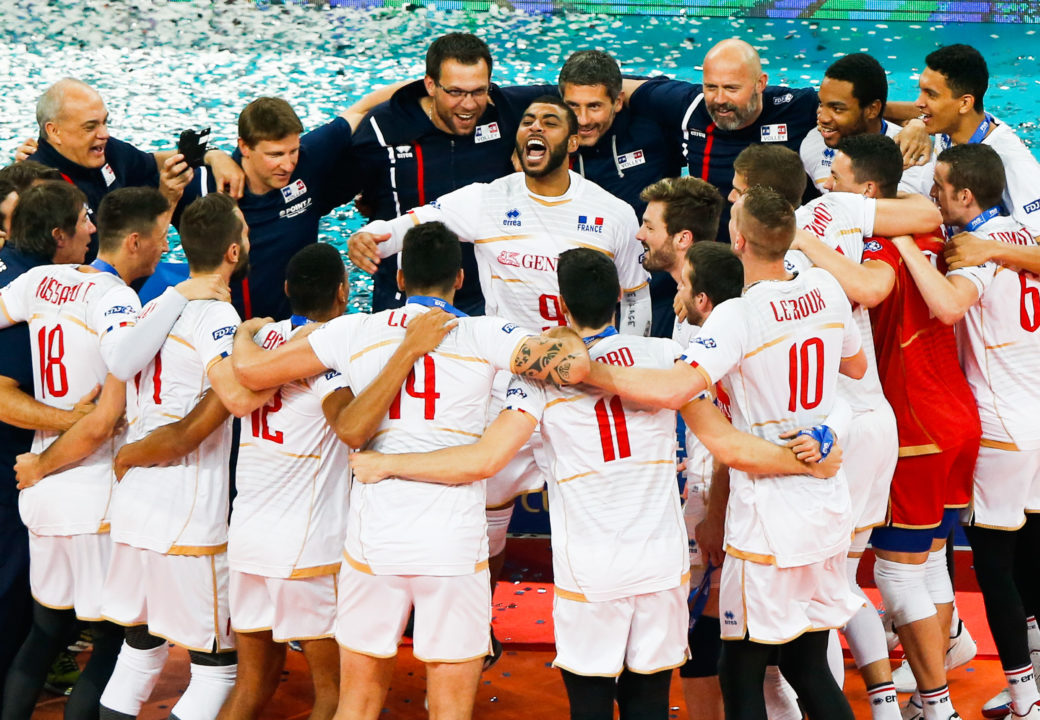 There were no real surprises upon the revelation of Laurent Tillie’s preliminary 24-player French roster for the first edition of the 2018 FIVB Men’s Volleyball Nations League. 13 of the 14 players that participated in last year’s World League Final 6, where France won their 2nd title in 3 editions, are eligible for selection this season. The lone exception is 29-year old outside hitter Guillaume Quesque, who has likely had his spot absorbed by Kevin Tillie, who missed last summer’s competition after having shoulder surgery.

His father, and French head coach, Laurent Tillie said that this is a ‘pivotal period’ for the French, who have not played a major tournament at home since the 1986 World Championships. They will host the Nation’s League Final 6 in Lille in July.

“I think it is a pivotal period that can serve as a launching pad for the Olympic Games in 2024,” Tillie said. “The challenge is twofold for us and for the entire Federation: we must succeed in performing and in attracting fans, and everyone has to get involved, and so it is a pivotal moment for us to move forward.

“It’s going to be a year when we have to learn how to play and especially to win in front of our audience. It must serve us to learn how to manage the pressure of a competition at home.”

The roster includes Earvin Ngapeth, who was named the MVP of last year’s World League and the Most Spectacular Player of Europe in 2016.

Tillie says that players who have finished their professional league have already begun training in Montpellier, with the rest of the team joining them for a two-week block. After that, the team will spend a week in Rouen before beginning the Volleyball Nation’s League, with a goal of having the full team present on May 17th.

Then, after a 3-week break, they will begin a 5-week preparation for the World Championships training in Montpellier, Cannes, and playing in the Wagner Memorial in Poland.

France begins their Nation’s League play in Rouen, the first of 5 weekends of pool-play competition, against Australian, Japan, and Iran.

Their next 4 sits are in Lodz, Poland; Aix-enProvence, France; Varna, Bulgaria; and Modena, Italy, before returning home to Lillie for what they hope will be a spot in the Final 6. France therefore has the benefit, besides playing 3 of the 6 weeks in their home nation, never having to leave Europe. While Bulgaria, on the coast of the Black Sea, is on the opposite side of the continent, France still avoids a much more arduous journey to Asia or South America.

France’s National Team will kick off their summer with a friendly against Japan on May 21st in Caen. They will have until a week before the Nation’s League competition begins to narrow their roster to 21 players, and then will have to select 14 for each weekend of play 2 days before that weekend starts.