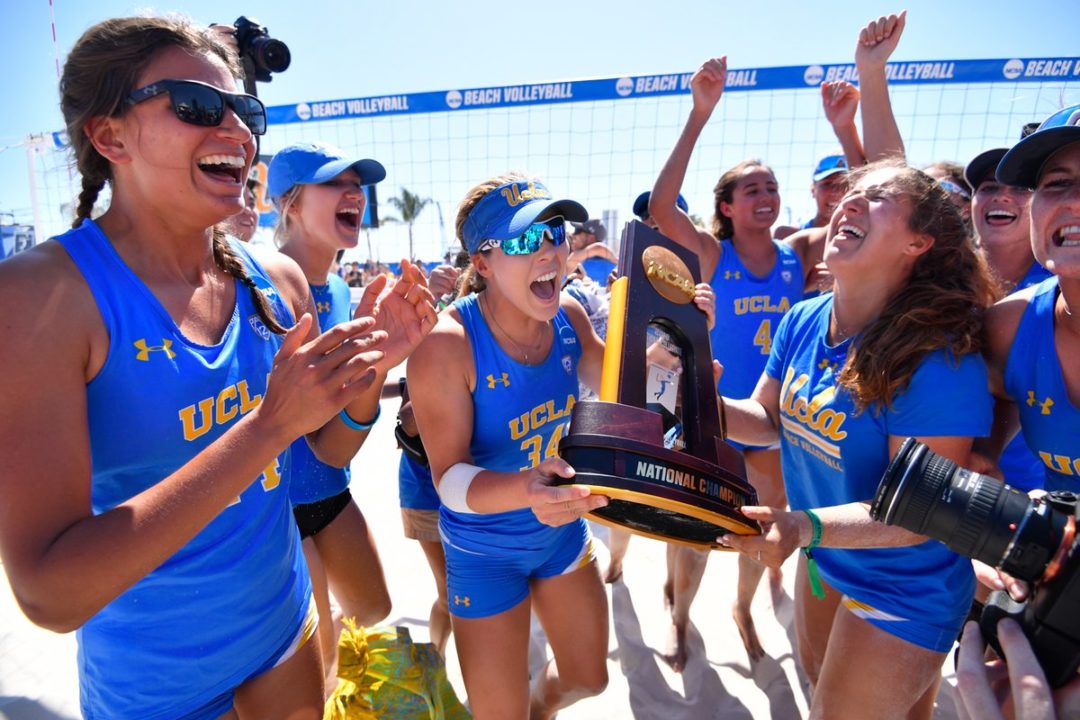 After besting Hawaii in a 3-2 affair earlier in the day, the UCLA beach volleyball team stepped on the court just an hour later with the championship on the line against No. 4 Florida State, which had advanced through the championship bracket on Saturday.

After splitting the first two matchups, UCLA cruised to a pair of victories to cap a 3-1 win and give the Bruins their first ever NCAA beach title.

With the change in format for the championship match, Courts 4 and 5 took center stage to start the contest. Florida State took the first set of both matches, only to see UCLA come roaring back in the second. With both courts in a tiebreak, eyes first turned to Court 5 where UCLA’s Izzy Carey and Megan Muret captured a 15-8 win. On Court 4, after trailing 6-2 early, Molly McBain/Brooke Kuhlman rallied for a 15-12 win to even the match.

Both court 1 and 2 were on championship point when Lily Justine and Sarah Sponcil planted the final kill, winning 21-18, 21-19 over Katie Horton/Hailey Luke, to give the Bruins the trophy.

Justine and Sponcil sealed the deal for the Bruins on court 2 to make history for UCLA!#NCAABeachVB pic.twitter.com/8dAEijqiEJ

After the match, a five-pair all-tournament team was named.

#116 NATIONAL TEAM CHAMPIONSHIP for UCLA.
Truly the “UNIVERSITY OF CHAMPIONS”