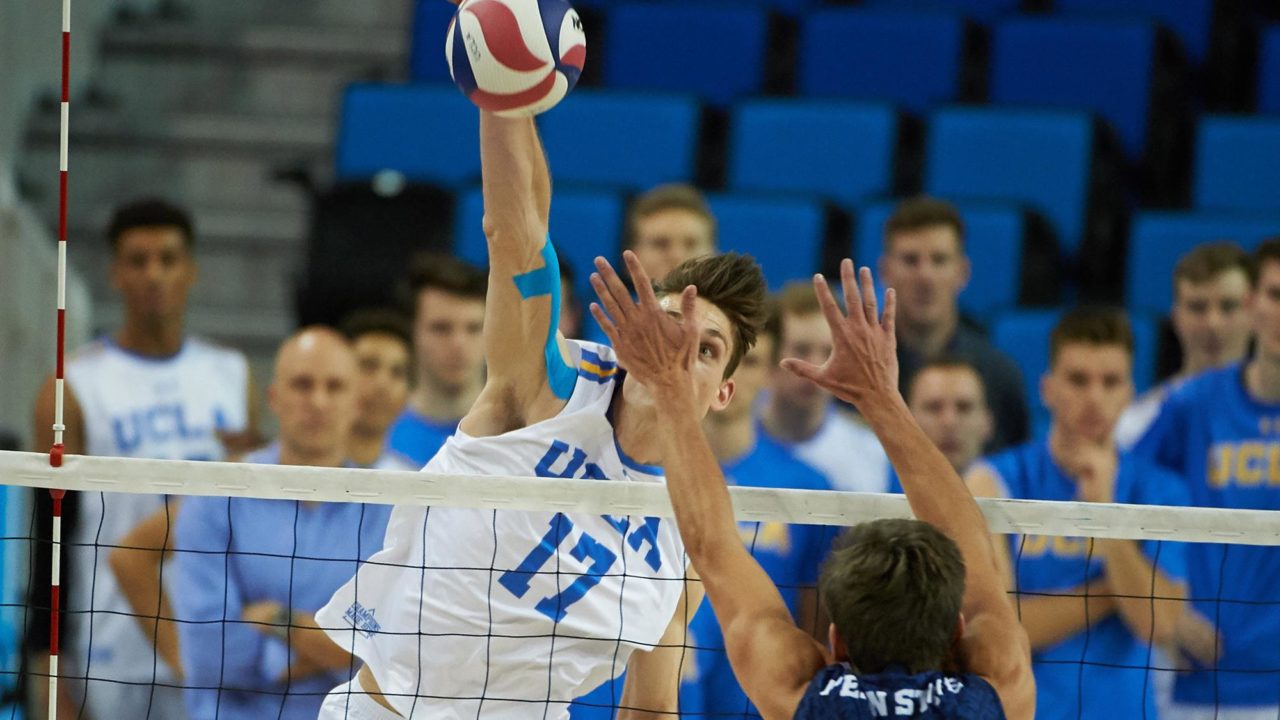 HONOLULU – Hawaii hosted UCLA for the second time this weekend, but this time, the results were flipped. On Friday night, Hawaii prevailed in a four set win, but on Sunday, UCLA claimed the victory, also in four sets. UCLA snapped the Rainbow Warriors’ 26 match home win-streak.

The key to victory was minimizing errors. While Hawaii outperformed UCLA in kills, assists, and digs, the Bruins posted only 13 attacking errors and the Rainbow Warriors tabbed 23.

Leading the UCLA offense was senior opposite, Christian Hessenauer, with 20 kills on a .457 clip. Dylan Missry and JT Hatch also had an impressive offensive performances with 12 and 11 kills, respectively. Setter Micah Ma’a ran the offense with 46 assists.

Hawaii was led by Rado Parapunov with 18 kills for a .419 hitting percentage. Stijn van Tilburg also had a double-figure kill performance with 13 on a .214 clip. They were fueled by setter Joe Worsley, who tabbed 46 assists, three kills, and 11 digs for a double-double.

UCLA will return home to host the Princeton Tigers on February 1st in the Wooden Center. Hawaii will host the first Waikiki Beachcomber by Outrigger Classic February 1-3, taking on Lees-McRae at 7 PM on February 1st.

The No. 2-ranked UCLA men’s volleyball team snapped No. 3-ranked Hawai’i’s 26-match home win streak with a four-set decision in Honolulu on Sunday night. Scores of the match were (22-25, 25-20, 25-22, 32-30). UCLA improves to 8-1 on the year, while UH suffered its first loss of the season after seven wins. Christian Hessenauer‘s 20th kill and then service ace on UCLA’s eighth match point attempt of the fourth set ended the non-league battle.

In set one, UCLA broke an early tie to take a 6-4 lead after a block by Oliver Martin and Hessenauer. Hawai’i quickly evened the score at six-all and took the lead at 7-9. The Warriors built the margin to 10-14. UCLA rallied to level the score at 15 on a Martin kill. Another UH streak of four straight points put the home team up 17-22. UCLA closed to 22-24, but Hawai’i hung on for the 22-25 win. Martin and Hessenauer each finished with three kills and a block. The Bruins hit just. .143, with six attack errors.

UCLA moved to a 7-4 lead in set two after a Martin / Hessenauer block. The Bruins extended the margin to 12-8 on a kill by JT Hatch. UH closed to 17-15, but kills by Dylan Missry and Hessenauer made it 19-15. UCLA led 21-17 following a block by Micah Ma’a and Daenan Gyimah. Hawaii rallied to get to 23-20, only to commit a service error and then a Missry kill ended the set at 25-20. UCLA hit .400 for the set and Missry finished with five kills and an ace.

The Bruins grabbed any early 5-3 lead in set three. Hawai’i tied the score at points six, seven and nine. UCLA opened up a 11-9 lead after a Missry kill. The Warriors rallied to even things up at points 12, 13, 14, 15, 16, 17 and 18. UCLA went ahead on a Hatch kill and a Ma’a ace for a 20-18 edge. UH cut the lead to 21-20, but UCLA answered with a block by Jake Arnitz, Hessenauer and Martin, followed by a Gyimah kill and then a Hessenauer / Gyimah block for a 24-20 lead. After two straight Warrior points, UCLA called timeout. Missry came out of the break with a big swing to give the Bruins the set at 25-22.

UCLA established a 7-5 lead in set four and extended the margin to 11-6 after a series of Hessenauer kills. Hawai’i chipped away and was able to get back to even the score at 14-all. The Bruins opened up a 20-17 gap after a Gyimah swing and then a Hessenauer kill. Once again, the Warriors battled back to tie the score at 21. Kills by Missry and Hatch put UCLA ahead 23-21 and forced a UH timeout. Hawai’i fought back to tie the score at 24-all. A couple of Hatch kills gave UCLA a look at match points at 25-24 and 26-25, but the Warriors hung tough. The Bruins would go on to have eight tries at match point, before a Hessenauer kill (after a fantastic dig by Ma’a) and then an ace ended the match at 32-30.

The Bruins will return home to host Princeton on Feb. 1 at 7 p.m. in the Wooden Center.

In another thrilling match in front of a playoff atmosphere, the match was reminiscent of Friday’s four-set win by Hawai’i. The Bruins (8-1) rebounded from a one-set deficit for the victory much like UH did two nights earlier.

UH (7-1) lost for the first time at home since March 4, 2016 against BYU and also saw its 24-match regular season, non-conference win streak halted. But not before a frenzied crowd of 4,706 that saw the Rainbow Warriors erase seven match points in the fourth set.

With the score tied at 30 in Set 4, UCLA setter Micah Ma’a crashed into the scorers table but not before remarkably setting a perfect ball to Christian Hessenauer who put down his 20th kill. On the next play, Hessenauer’s serve fell to the floor in front of Colton Cowell to end the match.

UH opposite Rado Parapunov finished with a team-high 18 kills, hitting .419. But it was reserves Cowell and Austin Matautia, who ignited the Warriors. Both entered at the start of the third set and helped to stabilize UH’s passing. Cowell finished with five kills, two aces and three blocks while Matautia had nine kills, hitting .438.

But it wasn’t enough as Honolulu-native Ma’a willed the Bruins to victory. The senior finished with 46 assists, two aces, and six digs and led UCLA to a combined hitting percentage of .481 in Sets 2-4, including .593 in the second set.

After both teams split the first two sets, head coach Charlie Wade went with Cowell and Matautia in place of a struggling Brett Rosenmeier and van Tilburg. The teams went back-and-forth for most of the set until the Bruins scored three of four points to take a 19-18 lead. UCLA got the upper hand on a long rally, eventually stuffing Parapunov for a 22-20 lead. UCLA, which did not commit a hitting error in the set, finished it with a back row kill by Dylan Missry.

Down 11-6 in Set 4, Wade turned to his bench again as van Tilburg replaced Parapunov at opposite. Matautia then came out on fire with three kills and the Warriors rallied to tie at 14 after a Patrick Gasmanoverpass kill. The Bruins took a 20-17 lead with the help an overturned call on replay challenge but the Warriors rallied again to tie it at 21. The match was tied eight more times, seven with the Bruins serving for the match. After a Gasman kill tied it at 30, the Bruins somehow won the next point as Ma’a made an incredible diving save on UH’s side of the court while crashing into press row that set up Hessenauer’s go-ahead kill and eventual game-winning ace.