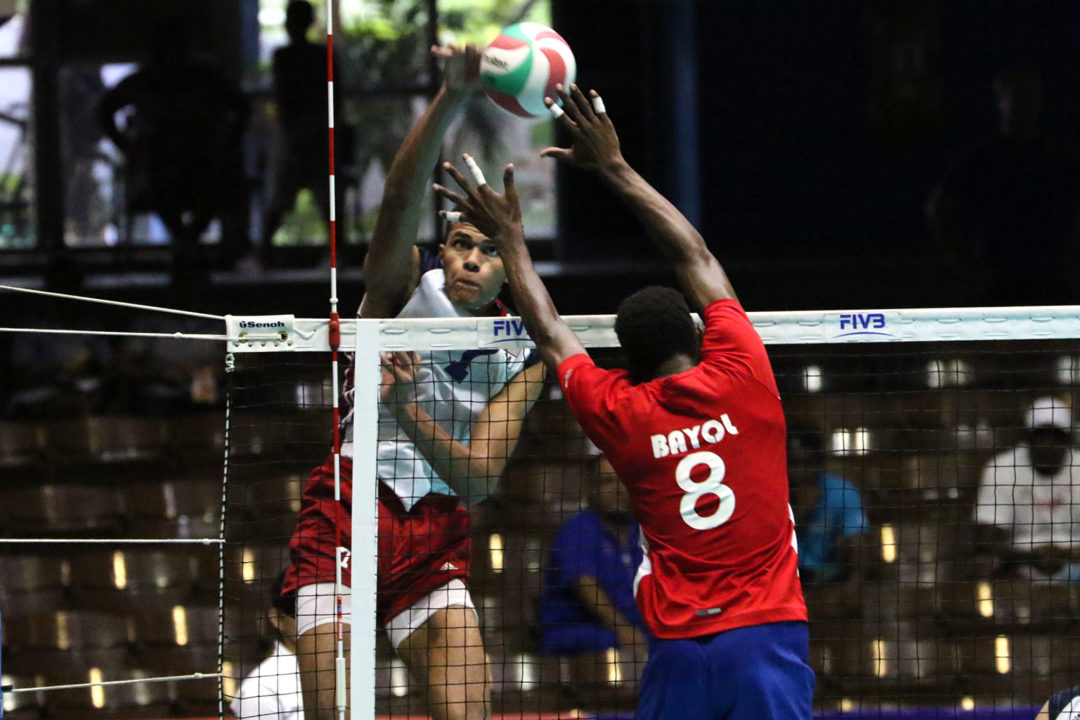 Jaylen Jasper led the United States for the second consecutive day with 12 points in a win over Haiti.  Current Photo via NORCECA 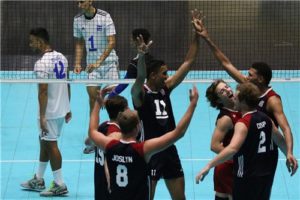 The United States celebrates during their 3-0 sweep of Nicaragua to open the 2018 NORCECA U-21 Championships.

The United States continued to roll in Pool B with a sweep of Haiti. Jaylen Jasper led the scoring again for the United States with 12 points on 8 kills and a match-high 4 service aces. Jasper, an opposite from Stanford, hit .333 for the match. J.P. Reilly led the match with 9 kills on 15 swings for a .533 hitting percentage. Reilly also had a service ace to finish with 10 points. Devin Joslyn, the other outside hitter, also scored 10 points on 8 kills, 1 ace, and 1 block while hitting .278.

Blake Crisp got the start at setter for the United States and set the team to a .440 hitting percentage. Crisp got 10 kills out of the middle. Sam Lewis scored points on 6 kills and 1 block. The other middle blocker, Kyler Presho, put away 4 kills, 1 block, and 2 aces to finish with 7 points.

Jean Bayol and Olando Joseph both scored 7 points to lead Haiti. Bayol, an opposite, scored all his points on kills and hit .200 for the match. Joseph led the match with 4 blocks. He also added 1 ace and 2 kills to the box score. Josmy Audate scored 6 points on 6 kills while hitting .556.

Xander Ketrzynki led Canada as their only player to score in the double digits with 12 points in just 2 sets of play. He led the match with 11 kills and a block while posting an amazing .769 hitting percentage from the right side. Michael Dowhaniuk scored 9 points for Canada on 7 kills, 1 block, and 1 ace. The outside hitter finished with a .357 attack average. Aleksandre Nsakanda came in at opposite for the last set and scored 5 points on 5 kills with a .444 hitting percentage.

Nicaragua only had a pair of players score more than 3 points in the match. Ronnier Baquedano came off the bench in the first set to score 11 points on 8 kills and 3 blocks. Jonny Zeledon earned Nicaragua’s only ace of the match. He also added 6 kills and a block to finish with 8 points.

As with their first match, the Dominican Republic relied on their captain and the tournament’s leading scorer, Bayron Pena in their sweep of Guatemala. The opposite scored 26 points on 22 kills, 3 aces and 1 block. His point total, kill total, and ace total were all match-highs. Jairo Bello was the second-best scorer for the victors with 11 points on 11 kills and hit .213. Dawlin Mendez scored 10 points in the middle on 6 kills, 2 blocks, and 2 aces. They were the only players to score more than 4 points in the win.

Edgar Espina finished with 13 points from the opposite position for Guatemala. His points came from 12 kills and an ace. David Ixpata scored 11 points on the left side with 10 kills and 1 ace. Jonatan Vicente contributed 6 points on 6 kills in the defeat. No other player for Guatemala scored more than 3 points.

Cuba used a lot of players in their 3-0 sweep of Barbados, using 4 new starters in the third set. Julio Morales led Cuba with 11 points on 8 kills, 1 block, and 2 aces from the outside hitter position. Their next-highest scorer was Jose Gonzalez. The opposite did not feature in the final set but still scored 10 points. He led the match with 4 aces and also put away 6 kills. Lazaro Llanes and Jose Suarez both finished with 6 points for Cuba. Suarez contributed 3 kills and 3 aces. Llanes scored on 4 kills and 2 aces.

Akeel Oxley scored 9 points for Barbados on 6 kill, 1 block, and 2 aces. The next-highest scorers were Ashe Oxley and Akeil Williams, who both scored 4 points in the loss.