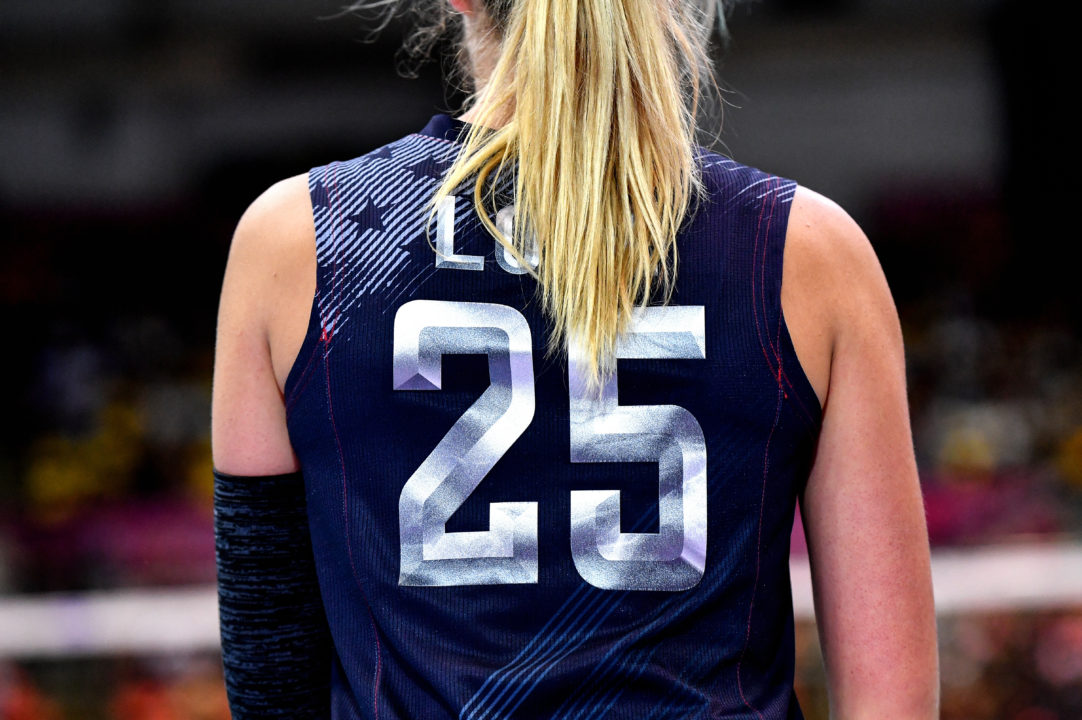 Karsta Lowe, above, will return to Rio with Team USA in her first official matches since the 2016 Olympic Games. Archive Photo via FIVB

Both the United States and Brazil have set their rosters for an upcoming quartet of friendlies that will be held across Brazil starting on Saturday. Beginning on Saturday, and continuing into next week, the two teams will traipse across the country in lock-step, playing 4 matches in Brasilia, Uberaba, and Rio de Janeiro as preparation for the upcoming World Championships.

As compared to the men’s roster, which  is almost entirely a “B” team roster for their friendlies this week against Argentina, the women are closer to half-and-half. Included on the American team is Michelle Bartsch-Hackley, who was the MVP of this summer’s Volleyball Nations League.

Even after a great summer – she’s not the headliner or attention-grabber of this roster. That honor belongs to Karsta Lowe, who will return to the U.S. National Team roster for the first time since the 2016 Olympic Games. Lowe retired shortly after those Olympics, and earlier this summer, at still only 25-years old, returned to training with the National Team. She wasn’t on the American roster for the Pan American Games, as many expected she would be for her return to major international volleyball, but has been chosen to return with Team USA to Rio.

8 of the 14 players who participated in the gold medal match of the Nations League for the Americans will play in the friendlies. The notable absences include their leading scorer in that match, Kim Hill, and starting outside Foluke Akinradewo.

Starting setter Carli Lloyd is also not on the roster, leaving Lauren Carlini and Micha Hancock to handle setting duties.

The big question mark for Team USA continues to be liberos. Justine Wong-Orantes, who began the Nations League as the American starter, is not on the roster; nor is Kelsey Robinson, who moved from outside hitter to finish that tournament as the team’s starter.

Instead, the USA has called up Amanda Benson, who was Wong-Orantes’ backup in week 1; and Megan Courtney, another converted libero who typiccally plays at outside hitter. Courtney was tested as the solution at libero last summer, though it sounded like that experiment was over after she tore her ACL.

Among the new faces to the group is the 2017 Big Ten player of the year Simone Lee, who has begun her professional career and will play in Turkey next season.

Brazil’s roster will likewise be a mix between their Nations League Final 6 team, and some reserves being called up for thee occasion. Brazil will have 10 of their 14 from that tournament on hand, including opposite Tandara Caixeta, who was the #4 scorer in the preliminary rounds off the Nations League, including multiple 30-point outputs.

For Brazil, the big return to the lineup is middle blocker Thaisa Daher. She has danced around the outskirts of Brazil’s primary team as she’s worked her way back from a gruesome injury suffered last year. She didn’t play in the Nations League tournament, but was on their 21-player roster.

Brazil finished 4th in the Nations League tournament, losing to China in the bronze medal match. The two teams faced off only once in the 6-week tournament, where the USA won 3-1 in week 4.

Thaisa is a middle blocker. The article says she’s an outside hitter.