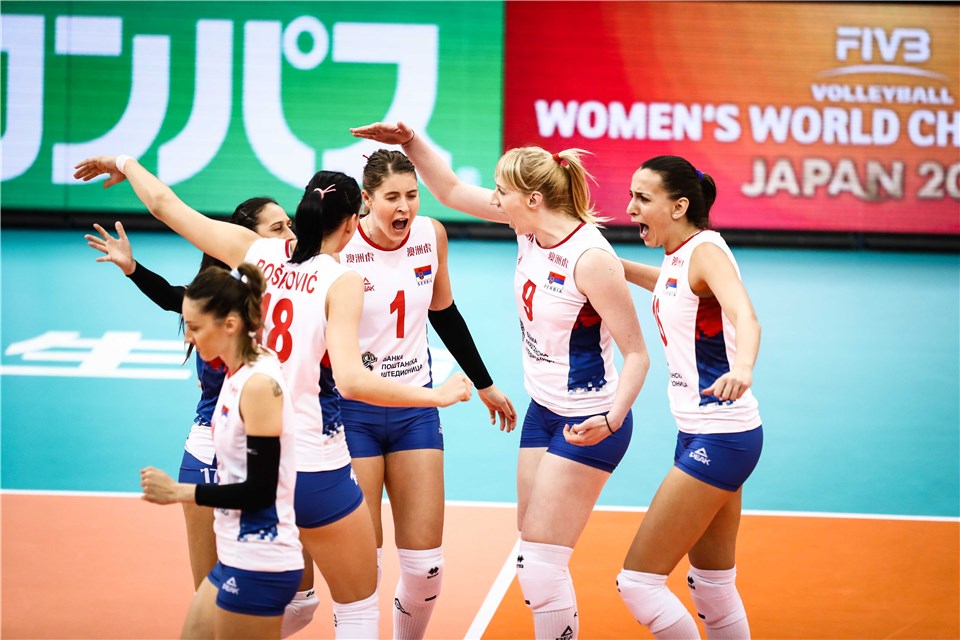 Serbia snapped its two-match losing skid on Sunday with a sweep of Japan to open Pool G play in the Final Six at the FIVB Women's World Championships.  Current Photo via FIVB

Serbia snapped its two-match losing skid on Sunday with a sweep of Japan to open Pool G play in the Final Six. After struggling with an abdominal injury in the team’s last two Round 2 matches, Tijana Boskovic was back in action against Japan, piling up a match-high 24 points on 21 kills and three blocks. Brankica Mihajlovic, who also had been hampered by injury in Round 2 was back at full strength with 18 points.

“It was important to win this game, the first in the third round,” Tijana Boskovic said. “It was tough from the first set as Japan had support from their fans. All our girls played hard. We will rest tomorrow and get ready for the Italy game.”

The Serbians sent a crowd of 8,000 Japanese fans home wanting as Boskovic and Brankica Mihajlovic combined for 42 points, while their team held Japan to just 60 for the match.

Boskovic, who had missed two matches with injury, paced Serbia with 24 points, 10 in the opening stanza, eight in Set 2 and 6 in the finale. Mihajlovic chimed in with 18 points, six in the opening stanza, five in Set 2 and a team-best seven in the clincher. Head coach Zoran Terzic made just one lineup change, opting to bring in Jovana Stevanovic in place of Stefana Veljkovic for Set 3.

Miyu Nagaoka scored 10 points to lead Japan, all on kills, before exiting the match after Set 2, while four other players chipped in six or more points. Sarina Koga managed seven points on five kills and two aces, while Erika Araki and Mai Okumura put up two blocks apiece in six point tallies. Ai Kurogo scored six points after entering the match in Set 2.

Serbia outdid Japan at the net, boasting a 48-32 lead in kills and 7-5 advantage in blocks. Japan scored 20 of its points on Serbian miscues, while committing just 17 errors of its own.

Japan boasted a brief 5-4 lead in Set 1, before Serbia rattled off 11 of the next 13 as Boskovic and Mihajlovic peppered the court with putdowns en route to a 15-7 advantage. The Serbs allowed Japan within four at 23-19, but picked up the 25-19 on a hitting error.

The Serbians cruised to a 25-18 Set 2 win. Boskovic paced the team as it went up 20-13 and finished off the set on a net violation.

Japan held a slight 8-6 advantage in Set 3, but Serbia turned the tables with a 6-2 run. The Japanese answered this time, scoring six of the next eight to build a 16-14 lead at the second technical timeout. Trailing 21-18, Serbia found its way with a Milena Rasic ace, a stuff by Bianka Busa and a final kill by Maja Ognjenovic to close out the sweep at 25-23.

“We lost 3-0 and did not have a good rhythm in the first and second sets,” Nagaoka said. “We allowed the opposition the chance to score and it made it difficult for us. We will do our best tomorrow.”