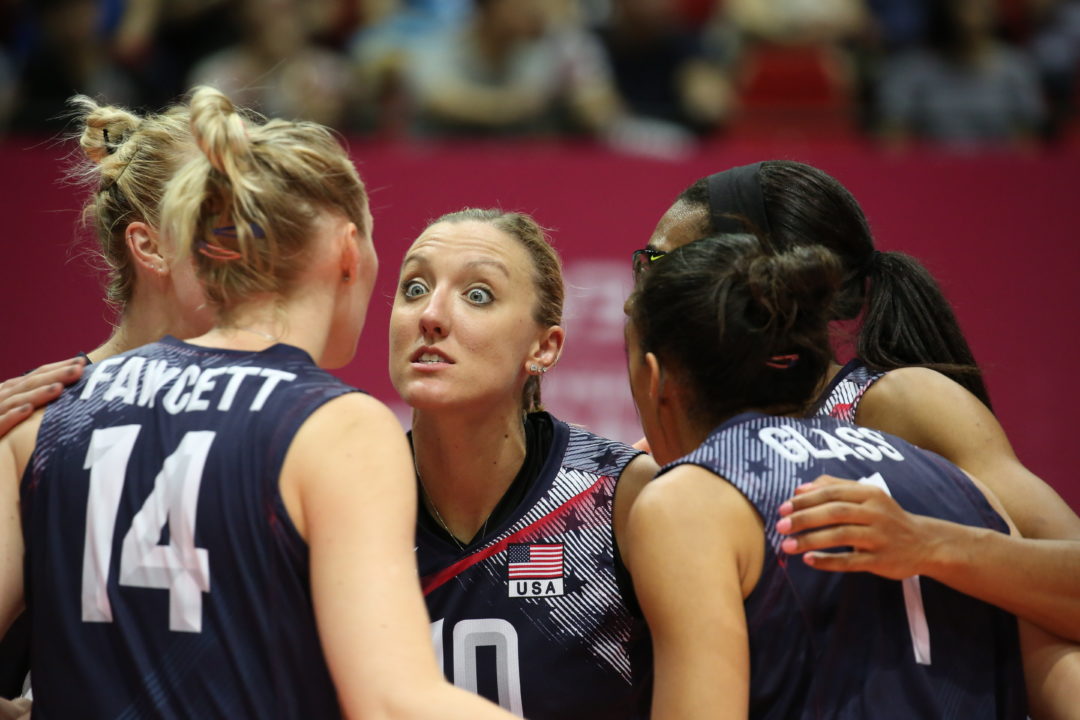 2016 USA Volleyball Player of the Year Jordan Larson (above, center) didn't play in last year's World Grand Prix, but is on the pre-cut roster for this summer's inaugural Volleyball Nations League. Archive Photo via FIVB

USA Volleyball has announced the preliminary 26-player roster that will play at the 2018 FIVB Nations League tournament that will begin the international season in May. This is the first year of the Nations League, which replaces the old World League (men) and World Grand Prix (women).

This list will be trimmed to 21 players by May 5th, and then USA Volleyball may name its 14-player roster up to two days before the start of each week’s round robin competition.

Among the new callups are former Alabama offensive dynamo Krystal Rivers, who was one of the highest-scoring players in the NCAA in the 2016 season and had a 40-point game at the 2017 World University Games. She spent her first professional season playing with Amber Rolfzen in France. 25-year old Penn State alum Aiyana Whitney has also been added to the opposites group.

The preliminary roster also gives hope to fans with the return of big names to outside hitter. Kim Hill, Jordan Larson, and Kelsey Robinson, who didn’t play in last year’s World Grand Prix, were all on the bronze medal winning Olympic team in 2016. All 3 appear on this year’s Nations League preliminary roster. Also returning to the national team fold are middle blockers Rachael Adams, Foluke Arinkradewo, and the addition of recent Texas graduate Chiaka Ogbogu.

Perhaps the most wide-open position headed toward Worlds, the U.S. has 3 liberos on their preliminary roster: Amanda Benson and Justine Wong-Orantes, who were on the team in last year’s World Grand Prix, and former Florida and Michigan defender Caroline Knop – a newcomer to this level of play.

Megan Courtney, who has been rehabbing an ACL injury and missed the 2017-2018 professional season, is also on the roster. She spent time playing libero for Team USA at the end of last summer.

“Our 2018 eligibility roster contains a blend of experience and youth,” U.S. Women’s National Team Head Coach Karch Kiraly said. “From returning Olympic medalists to people barely out of college, we’re thrilled to see how this group comes together during a challenging five weeks of preliminary competition, and thrilled to be preparing for the first-ever Volleyball Nations League.”

In the new format, 16 teams will be split into 4 round-robin pods each week for 5 weeks of preliminary play, with the top 5 teams plus the finals host (in this case, China, who likely will be in the top 5 anyway) advance to the Final 6. The lowest-placing of the 4 “Challenger teams” (Australia, Bulgaria, Canada, South Korea) will play the winner of the Challenger Cup, with the winner qualifying for the top tier of next year’s tournament.

Other players will be training at the American Sports Centers in Anaheim throughout the summer in preparation for the Pan American Cup in July and the World Championships that starts on September 29th in Japan.

A surprising call up, although it is quite clear who will contend to make the final cuts and who will only be there for training. The fact that Symone Lee wasnt called up for a team that has so many teenagers in it is alarming. I am very happy for Kristal Ryvers though.