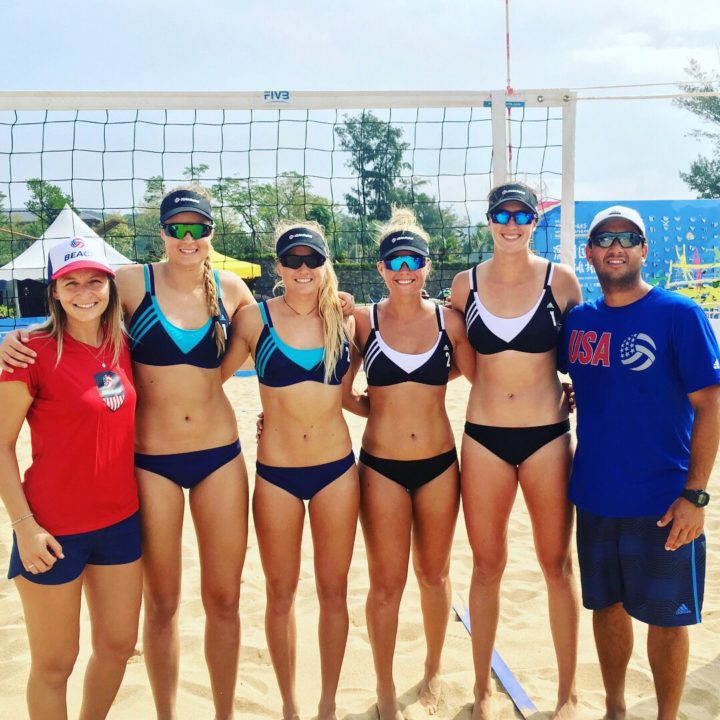 The United States claimed the top two spots on the podium at the Shenzhen International Festival in China on Sunday.... Current Photo via USA Volleyball

The United States claimed the top two spots on the podium at the Shenzhen International Festival in China on Sunday.

Representing the U.S. at the event were USC’s Nicolette Martin and Terese Cannon and Pepperdine’s Brittany Howard and Corinne Quiggle, who qualified after earning silver and bronze at the USAV Collegiate Beach Championships in May.

Martin/Cannon defeated Howard/Quiggle in the Shenzhen championship match, which capped off the invitational for college-aged teams from the U.S., Canada and China.

“Traveling to China for my first international tournament was such an awesome experience!,” Cannon said. “I have learned so much and met so many incredible people. The opportunity to travel, see a new culture and play the sport I love is something that I will cherish forever.”

Martin agreed that the trip was memorable and beneficial.

“This was my first time representing the U.S. overseas,” Martin said. “It was such an honor be maxing experience to be able to compete with athletes from the other side of the world and embrace the Chinese culture! I think this trip has definitely better prepared me on my journey in pursuing professional beach volleyball.”

Even the runnerup squad valued the event.

“I have loved every second of this trip,” Howard said. “Getting to represent Team USA is such an honor and amazing opportunity. We were able to show younger players from different cultures how we train and compete, in addition to getting the experience of what the next step in our careers will be like at FIVB events.”

At the USAV Championships, the pairs finished behind USC duo Kelly Claes and Sara Hughes, who also won the NCAA Beach Championship and went on to play on the FIVB World Tour.