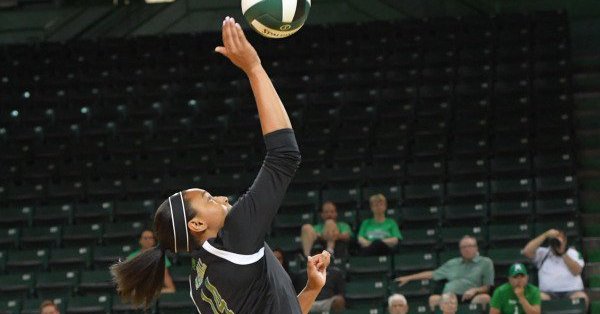 Gainesville, Florida, native Jac'Cara Walker is returning to the sunshine state after sending two years at Marshall University. The 5-foot-9 outside hitter is transferring to USF for the 2018 season.  Current Photo via Marshall Athletics

Gainesville, Florida, native Jac’Cara Walker is returning to the sunshine state after sending two years at Marshall University. The 5-foot-9 outside hitter is transferring to USF for the 2018 season.

Walker, who posted 712 kills, 369 digs, 54 blocks and 55 aces in two years with the Thundering Herd, is  “a great match for our system, USF coach Courtney Draper said in the announcement.

“We are very excited to welcome Jac’cara to our program,” Draper said. “Our staff loved watching her play throughout her high school career and she now has proven success as a Division I player as well. She is simply a great six rotation volleyball player. I think she is going to help our program on many levels and is a great match for our system.”

While at Marshall, Walker earned Conference USA All-Freshman team honors and two Freshman of the Week accolades in 2016. In 2017, she led the Thundering Herd with 3.92 kills per set, while hitting .215, pulling up 2.46 digs and notching a team-best 33 aces. Walker played in 26 of the team’s 30 matches, starting 24. Walker earned Conference USA Co-Offensive Player of the Week honors, Sept. 25.

Marshall went 11-19 in 2017, falling to North Texas in the Conference USA Tournament after finishing seventh in the regular season. USF posted a 12-18 mark in 2017, finishing ninth in the American Athletic Conference.

Excited to announce our fifth addition to the 2018 roster! Welcome to the USF ? family Jac'cara! ?