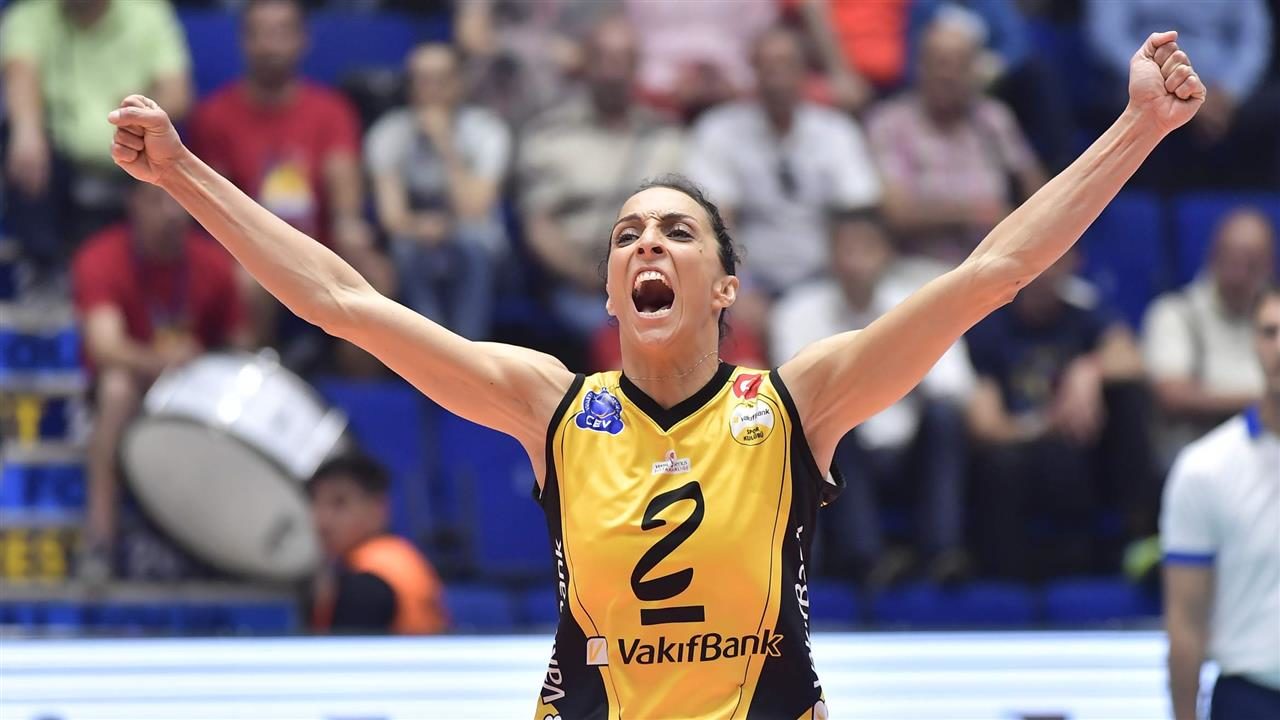 Gozde Kirdar will end her career as a quadruple champion with VakifBank Istanbul in 2018. Current Photo via CEV

VakifBank sent their retiring captain Gozde Kirdar out not just on a victory, but on a lopsided, one-sided dominant performance. With a pair of 3-0 sweeps in Sunday’s medal matches, it seems that the semi-final between VakifBank and Conegliano (a rematch of last year’s gold medal match), will stand as the event of the final  four this year.

It was an electric atmosphere on Sunday evening in Bucharest. Nearly the entirety of the cheering sections at the Sala Polivalenta stood for the entire match, and as victory grew nearer, the visiting supporters from VakifBank grew louder.

There were no ill signs for the world’s best player, VakifBank attacker Zhu Ting, after a right ankle injury cost her most of the 3rd set in the semi-final. She exploded for 15 points in just 3 sets on Sunday. She contributed in all phases, looking more comfortable in the back-row than she did earlier in the weekend, and contributing 1 ace and 4 blocks in addition to her 10 kills.

The hitting percentages from the first set (38% for Alba Blaj, 33% for VakifBank) are a little misleading, in that Alba Blaj struggled with passing all day. Throughout the match, Istanbul scored at least a dozen points on Alba Blaj overpasses, and when VakifBank came through the Alba Blaj block cleanly, the Alba Blaj liberoes were almost helpless (they used both Melisa Memis and Selime Ilyasoglu throughout the match, rotating based on service).

Eventually, VakifBank would come out of the match with a 55% hitting rate, walloping 76% of their shots to the ground in the 2nd set, and 64% in the clinching 3rd.

Meanwhile, Alba Blaj’s star Ana Cleger had opportunities, but she wasn’t able to overcome the imperfect passing and setting and hit long on several occasions. Even her traditionally-powerful serve failed her in the match. She had 2 errors on 5 service attempts, and had only 3 kills as compared to 3 errors and 7 shots blocked in the match. She would eventually be subbed-out of the match for Slavina Koleva, who finished with more points (4) has had Clever (3).

By the second set, the game had devolved into a clinic in favor of VakifBank, who were running their opponents all over the court, combining power with off-speed, hitting off-the-block and hitting-for-space. To their credit, VakifBank remained sharp where they could’ve lost focus and broken down.

Alba Blaj found some tempo on short sets late in the 2nd set, which was how they were able to fight back and eventually overcome Galatasaray in the semi-final, but it was too little, too late to overcome the talented VakifBank front. They led early in the 3rd set using the same strategy, but VakifBank adjusted to complete the sweep.

Kelsey Robinson, the best outside hitter of last year’s Champions League, and who played a big role in the semi-final didn’t see the court until late in the 3rd set, where she entered the game with 3 points for the championship. Alba Blaj would spoil the moment with a late block and a forced VakifBank error, but Robinson played a crucial role in receipt and Kirdar added one more late kill (landing awkwardly and injuring her left knee).

VakifBank captain Gozde Kirdar, who has been with VakifBank since she was 14 years old in 1999, is retiring after this match. For a moment, she stood alone on the podium to lift the trophy alone in honor of her final moment in the yellow and black of the only club she’s ever known. Her side won its 4th Champions League title on Sunday, and she is the only player who has been with the team for each of those. The club has won all 4 competitions they’ve entered in 2018: the Turkish League, the Turkish Cup, the Turkish Super Cup, and will have the chance to match their 2013 5-for-5 later this year in the FIVB Club World Championships.