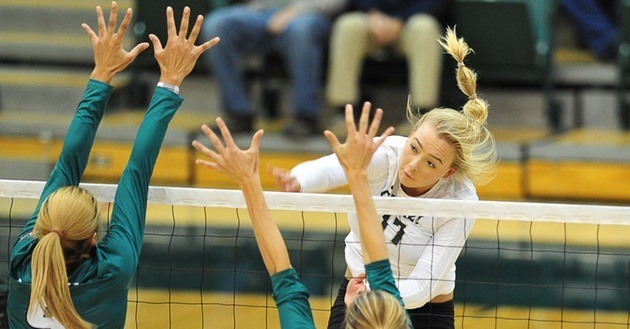 Junior outside Adlee Van Winden downed 17 kills and added two aces and a block, while her sister Torrey chipped in 11 kills and a team-best three blocks in the season-opening win. Archive Photo via Cal Poly Athletics

DE KALB, Ill. – Cal Poly kicked off its 2017 campaign with an efficient offensive showing in a sweep of Dayton on Friday morning.

Junior outside hitter Adlee Van Winden, who led the Mustangs in kills last season, paced the victors with 17 kills and two aces, while also adding a solo block. Senior outside Raeann Greisen, an All-Big West selection a year ago, chipped in 14 kills on a .370 hitting effort. Sophomore outside Torrey Van Winden, who transferred in from UCLA in the offseason after earning All-Pac 12 honors in 2016, followed with 11 kills and a team-high three blocks. Katherine Brouker led the way defensive with 11 digs.

Dayton led 9-6 in the first set, only to see the lead slip away due in a 9-3 Cal Poly rally. Four different players tallied kills in the run to make it 15-12, which also featured a Brouker ace. The Mustangs upped the advantage to five at 20-15 on an Adlee Van Winden block. The Flyers would get no closer than four the rest of the way as Cal Poly ended the set on a 3-0 run, capped by back-to-back putaways by Greisen.

UD boasted a five-point edge in Set 2 as an Erhanon ace made it 10-5. That tipped off a 9-1 Cal Poly run, including five kills, a block and an ace, which turned the table to put the Mustangs ahead 14-11. Cal Poly built the lead to five at 22-17, but Dayton surged back with four straight points before thwarting two Mustang set point chances to tie the score at 24-all. After denying another Cal Poly set point chance at 25-24, the Flyers had a chance of their own at 26-25 after a pair of Erhahon putaways. Adlee Van Winden ended the comeback effort with three straight kills to close out a 28-26 win for Cal Poly.

The Mustangs carried the momentum into Set 3, jumping out to a 7-3 lead with seven-straight points including a pair of blocks and two Flyer miscues. Cal Poly led 14-8 midway through the stanza. Dayton narrowed the gap to three at 16-13, but the Mustangs answered with five of the next seven points. Up 21-17, Cal Poly wrapped up the match with a 4-1 run, ending the contest on a solo stuff by Torrey Van Winden.

UP NEXT
The Flyers will square off against the host Huskies later today with first serve set for 8:30 p.m. in the nightcap.

Opening the 2017 season with two straight matches against defending conference champions on Friday, the Cal Poly volleyball team came away with back-to-back sweeps on Day 1 of the Northern Illinois Holiday Inn Express Invitational, 3-0 over both Dayton (of the Atlantic-10) and High Point (Big South).

Dayton, which went 30-2 overall in 2016 (including 14-0 in conference play before also claiming the A-10 tournament crown), came into this week effectively No. 28 in the AVCA rankings (third in the Top 25 others-receiving-votes category).

The Flyers took a 9-6 lead in the opening set on a service ace, but the Mustangs quickly came back, using a 4-0 run to pull in front thanks to a UD attacking error, a kill by Adlee Van Winden, an ace by Katherine Brouker, and a kill by Taylor Nelson.

In Set 2, the Flyers recovered by getting out to a 10-5 advantage, but Cal Poly responded with a 9-1 surge to go up 14-11. After trailing 22-17, Dayton fought back to deadlock the score at 24-all. The Flyers found themselves with a set-point opportunity after going ahead 26-25, but Cal Poly stayed alive with a tying Nelson-to-Van Winden connection, and then following back-to-back serves by Brouker, got two more consecutive Van Winden kills off Nelson assists to clinch the game.

Dayton began the decisive third set with the initial three points, but the Mustangs suddenly reeled off a 7-0 run and never looked back.

Adlee Van Winden finished with a team-high 17 kills in the first win, while Greisen (who entered the season among the top 35 in the NCAA in career kills) had 14, and Torrey Van Winden — making her Cal Poly debut upon transferring from UCLA and joining her sister with the Mustangs — added 11.

Savannah Niemen hit a team-leading .750 (6 kills in 8 attacks) in the victory, while Brouker led the defense with 11 digs. Nelson set for 41 assists. After ranking No. 6 nationally as a junior with 11.64 assists per set, her average was 13.7 in Friday’s opener.