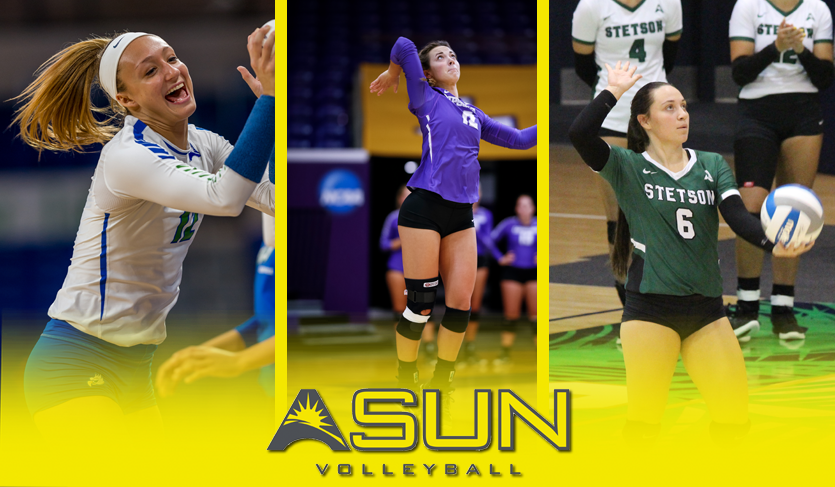 After a big weekend and huge performance in a win over a Power 5 opponent, FGCU’s Cortney VanLiew takes home this week’s honor of Player of the Week. The sophomore outside hitter tallied 53 kills in a 2-1 weekend for Matt Botsford’s squad. Her 53 kills are currently tied for lead the ASUN with Stetson’s Eva Deisa. VanLiew kicked off her season with a 17-kill performance in a win against FAU on Friday night. In that match she also hit an eye-popping .516. The Indiana native’s biggest performance came against the toughest competition last weekend, as she went for 21 kills, eight digs and a .471 hitting percentage in a 3-0 sweep of Miami, who was an NCAA Tournament team in 2017. Three games into the season, VanLiew leads the ASUN in kills/set and hitting percentage at 5.30 and .411 respectively.

Nusbaum adds to her decorated career, as she takes home her 10th career Player of the Week honor; the most in ASUN history. The senior from Overland Park, Kan. was an integral part in Lipscomb’s wins over SMU and Iowa, two top-100 teams last season. She notched double-doubles in both games. In Friday’s win against SMU, she had 10 kills and 11 digs to go along with a .358 hitting percentage. She followed that up with an even better performance against Big Ten foe Iowa, as she had 21 kills, 13 digs and a hitting percentage of .356. Nusbaum now ranks 11th in ASUN history in kills with 1,346.

The Stetson Hatters went 3-0 over the weekend, their best start since 1996, and it wouldn’t have been down without the defensive effort from Chelcie Spence. The sophomore defensive specialist totaled 58 digs in the Hatters’ perfect weekend, including a 23-dig performance in a comeback win over FIU. Spence is just the second player ever in Stetson history to win the award, the first being Ellen Hawks back in 2013.

Dana Axner kicked off her collegiate career with a bang over the weekend. She started at libero for the Eagles and helped them to two victories, en route to earning this week’s Freshman of the Week award. Axner totaled 40 digs over the weekend, which currently leads all ASUN freshmen and is top-10 in the league. She becomes the sixth-ever FGCU player to win the honor, joining teammates Amanda Carroll, Cortney VanLiew, Snowny Burnam and Dani Serrano.

Courtney VanLiew, FGCU
Sophomore | Outside Hitter | Seymour, Ind. | Exercise Science
– Second Career ASUN Player of the Week Award; first this season
– Recorded 53 kills, 5.30 kills/set, 18 digs and a .411 hitting percentage in a 2-1 weekend for FGCU
– Had 17 kills and hit .516 in FGCU’s season opening win over FAU
– Tallied 20 kills and eight digs in the Eagles’ sweep of Miami
– FGCU’s win over Miami was the program’s first-ever road win over a Power 5 opponent

Carlyle Nusbaum, Lipscomb – Aug. 27th
Senior | Outside Hitter | Overland Park, Kan. | Business Marketing
– 10th Career ASUN Player of the Week Award; most in ASUN history
– ​Registered 31 kills, 3.88 kills/set, 24 digs, three blocks and a .358 hitting percentage in a 2-0 weekend for Lipscomb
– In Friday’s sweep of SMU, Nusbaum recorded a double-double of 10 kills and 11 digs
– Led the charge in a comeback win over Iowa, with 21 kills, 13 digs and a .356 hitting percentage
– Now sits 11th all-time in ASUN history in kills with 1,346

For an ASUN record TENTH time in her career @icarlyyy12 is your #ASUNVB Player of the Week! 🥳🎉 Nusbaum totaled 31 kills, 3.11 kills/set and a .358 hitting percentage, helping @LipscombVBall defeat SMU and Iowa!