Verbal Conflict Before the Start of Iran vs. China 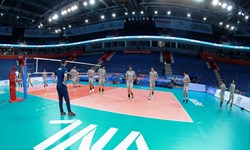 Iran during a training session in the UFA arena. Current Photo via Rahim Rahimzadeh

According to Fars News Agency, the technical staffs of Iran and China were involved in a verbal conflict during the training session prior to the match.

Iran’s team had arrived at the hall half an hour before their training session and China’s team was practicing in the competition hall. At the request of Luzano, head coach of and officials of the Chinese team, Iran players and staff were not allowed to enter the hall before completing the training session.

Normally, every team has the right to keep their training session private from their rival before the match, meaning that members of the Iranian national volleyball team were not allowed to enter the competition hall. They waited behind the closed door for China to end their practice. Once it had concluded, Saeed Marouf, the team captain of the Iranian team, led his teammates into the hall to begin their warm up. However, some of the Chinese team had not cleared the hall completely and a few of them were scattered in corners of the hall. Igor Kolakovic, head coach for Iran, noticed they were still in the hall and requested that the China officials take their players out of the hall several times.

This caused an ugly encounter from the Chinese. By explicit protest and anger, Amir Khoshkhabar, Iran’s team manager, resolved the problem.

By the end of Iran’s training session, the FIVB Supervisor gathered the managers and head coaches of both teams after reviewing the issue, and placed the blame on the Chinese team for creating this coalition. China officials expressed mollification to the head coach and manager of Iranian team. Both teams went back to preparing themselves to start the match, which was crucial for them as the powerhouses of Asia.