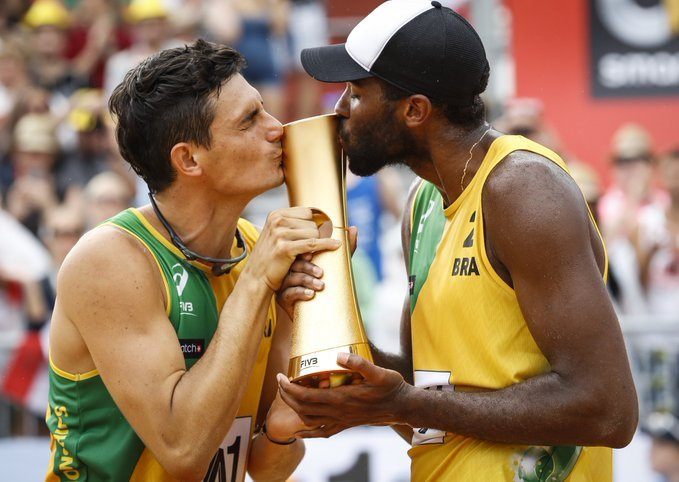 Brazilians Evandro Goncalves and Andre Stein are the 2017 FIVB Beach World Champions after topping hometown stars Clemens Doppler and Alexander Horst of Austria in the gold medal match Sunday afternoon. The match featured nearly everything, including a bee sting to Horst, an over the net call by the official, a Brazilian comeback including three aces in Set 1, an exhuberant crowd of 10,000 and a little rain for good measure.

The victory gives the No. 4 seeded duo their first ever gold medal in an FIVB event and makes 22-year old  Andre the youngest player ever to win an FIVB World Championship. It also denied the Austrians their bid to become just the second homestanding team ever to win gold.

“I dreamed about being a world champion one day, but it actually surprised me winning the gold medal in such a young age and in the first year of my partnership with Evandro,” Andre said. “It just makes me happier and even more proud of what we did. There’s no way I can talk about this game and this tournament without talking about what Evandro did, especially in the first set when he got those aces. I look at him now and I see a superhero. He made the difference not only in this game but in the entire tournament.”

Evandro/Andre won the block (5-3) and the serve (7-3) and had help from 13 Austrian miscues. The Austrians did win the offensive battle with 28 kills to Brazil’s 19.

Doppler was the top scorer in the match with 25 point, including 21 kills, all three of the team’s blocks and an ace, but it was not enough. Brazil utilized a balance scoring attack with Andre managing 12 kills, four blocks and an ace, while Evandro served up six aces and added seven kills and a block.

The Austrians led 20-16 in Set 1, but could not hold on as Evandro served up three straight aces to thwart each set point attempt after an Austrians service error. Austria had another shot at 21-20, but Andre stole the set away with a kill, a block and an ace. The Brazilians built a two point lead in Set 2 at 9-7 and the teams traded points from there with the Austrians answering each point with a kill. The Austrians never gave up, and down 19-17, Evandro served into the net to keep the Austrians alive late and a block by Doppler tied the score. After a timeout, the Brazilians had gold medal point after a Doppler service error, but mishit the next ball, sailing it long. Andre pounded a cross court shot to give them another shot at the medal and rejected the final ball to seal the deal.

“Of course it’s been like a fairy tale because there has been no Austrian team winning a medal at the World Championships,” Horst said. “We reached the final at home with this amazing, crazy crowd. I think it’s the best tournament in Beach Volleyball in history. Of course we’re a little bit disappointed we didn’t win but they deserved to today a little bit more and for us it’s the biggest success we’ve had in our career.”

Evandro/Andre made the final after ending the Cinderella story of No. 45 seeded Dutch duo Maarten van Garderen and Christiaan Varenhorst, who made the semifinals after earning a wild card entry into the competition.

No. 12 seed Doppler/Horst advanced to the championship match by knocking off No. 6 seed Viacheslav Krasilnikov and Nikita Liamin of Russia.

The Russians claimed the bronze medal with a 21-17, 21-17 win over Varenhorst/van Garderen. The medal was the first for a Russian men’s team at the World Championships since Dmitri Barsuk/Igor Kolodinsky took silver in 2007.

“It’s a very good feeling,” Liamin said. “It was difficult for us to regroup and refocus after we lost in the semifinals. I’m happy that we could play at this level. It was a great experience for my partner and me and we’d like to thank all the organizers and the public for such an amazing tournament”.

Liamin scored a match-high 19 points, including 15 kills and three blocks.