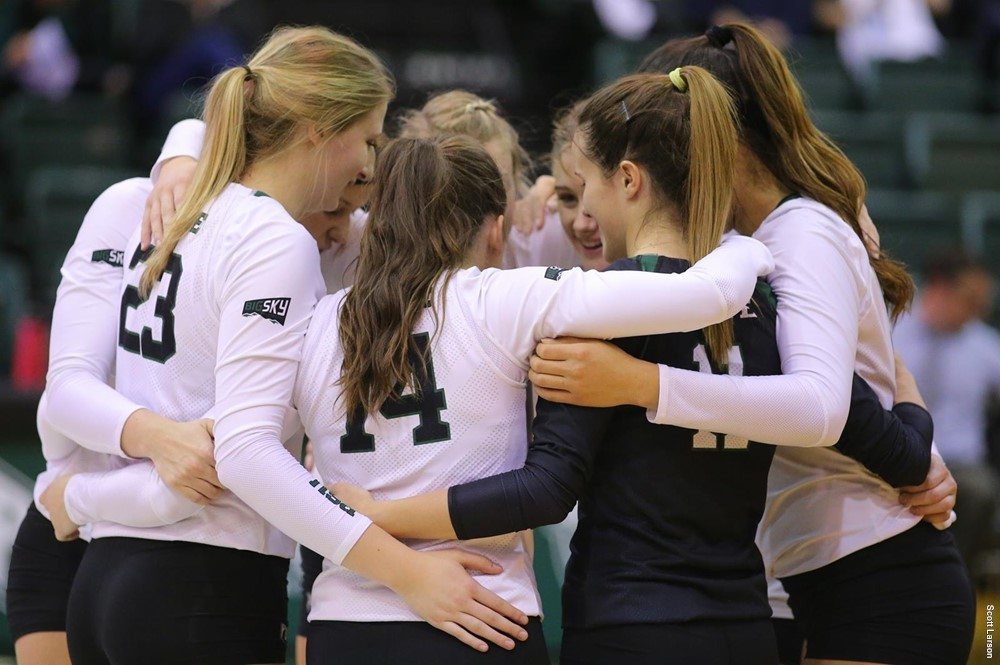 PORTLAND, Ore. – The Portland State Vikings defeated the Portland Pirates Tuesday night in a mid-week cross-town match-up in the Chiles Center. The Vikings are now 19-5 all time when playing the Pirates at home.

The Vikings hit .197 on the match, with a match high .250 clip in the first. They held the Pirates to .110 hitting percentage. Portland State also out-blocked the Pirates 10-4.

Portland State setter, Erin Clark, totaled 32 assists and 14 digs for her fourth double-double on the season. On the other side of the net, Cali Thompson notched 27 assists, six digs, and one kill.

Portland’s offense was led by Reghan Pukis with 14 kills on a .138 clip.

Both teams will resume play in the Nike Invitational on Friday.

PORTLAND, Ore. – The Vikings ended their two-match slide with a three-set win over cross-town rival the University of Portland Wednesday night at the Chiles Center. The Vikings took the match by scores of 25-20, 25-23, and 25-16.

The Portland State (7-3 overall) offense struggled at times but the Vikings came up big when they needed to, especially on the defensive end. The Vikings tallied 72 digs as a team, a season high for a three-set match. They also posted their fourth double-digit block match of the season with 10.0 against the Pilots (7-3).

JR MB Katy Wilson played tremendously, both offensively and defensively. She hit .667 (10-0-15) with 10 kills for her second double-digit kill match of the year. Wilson and fellow middle blocker Mikaelyn Sych led the team with 5.0 blocks with Wilson coming up with the team’s lone solo block. Wilson also added two of the teams four aces. Sych finished the match with five blocks and five kills.

The Vikings put together a well-balanced offensive attack with three players tallying double-digit kills. SO OH Caitlin Bettenay, after tallying just nine kills over the previous two matches, led the Vikings with 11 kills on the night. She added seven digs and a pair of blocks.

A lot of the credit for the balanced offensive attack goes to SR S Erin Clark who posted her fourth double-double of the year with 32 assists and 14 digs along with a pair of blocks.

SR DS/L Tasha Bojanic anchored the back row for the Vikings with a team-high 19 digs, the most by a Viking in a three-set match this season. JR DS Haley Glass added 11 digs coming off the bench.

The opening set was close through the early stages. Each team was able to take a three-point lead but that was about it as the other would come right back and tie it. The Vikings took the match’s first four-point lead at 19-15 following a 5-1 run. Portland State improved its lead to five points after a block from Sych and SO OH Toni McDougald.

Five Vikings tallied multiple kills in the opening frame, led by Bettenay’s five. McDougald added four in the first and finished with seven kills and six digs for the match. Sych combined with McDougald for a block and with Webb three times in the first.

The Vikings trailed 12-9 midway through the second set before back-to-back kills from Webb pulled them within one. The teams traded points before the Pilots took a 15-12 lead, which forced a Portland State timeout.

A kill from Wilson followed by combo block from Wilson and Clark made it 15-14. After a UP kill, Wilson again made it a one-point margin with another kill. She tied the set at 16-16 with a service ace. A kill from Bettenay gave the Vikings a 17-16 lead, which forced a Portland timeout.

After a Pilots attacking error, Wilson picked up her second service ace of the rotation to put the Vikings up 19-16. Portland scored five of the next seven points to tie the set at 21-21. The Vikings scored three-straight points to go up 24-21. The Pilots staved off two set points before Wilson ended it with her fifth kill of the set.

Wilson came up big for the Vikings in the second. She hit .833 with five kills on six swings. She added two blocks and a pair of aces for 8.0 total points in the frame.

The Vikings took an early 7-4 lead in the third set after a block from Sych and Clark. The Vikings extended their lead to 12-8 before the Pilots pulled within two at 14-12. Kills from Wilson and Bettenay put the Vikings up four at 16-12, forcing Portland’s second timeout of the set.

Back-to-back points from Portland cut Portland State’s lead to 19-15 and forced the Vikings to call a timeout. The Vikings put the petal to the metal and closed out the set in definitive fashion. Three-straight kills from Bettenay, Webb, and Sych put the Vikings up 23-15. The teams traded service errors before Bettenay gave the Vikings the 25-16 win with her 11th kill of the match.

Portland State held Portland to a .000 hitting mark in the final frame. The Vikings tallied 16 kills, 17 digs, and a pair of blocks in the third.

Portland’s Reghan Pukis led all players with 14 kills, while hitting .138 on a match-high 58 attacks.

The Vikings will have a day off before taking on CSUN, for the second time this season, Friday afternoon at 3 p.m. PT at the Chiles Center. Portland State closes out the Nike Invitational on Saturday at 11 a.m. against UTEP.

PORTLAND, Ore. — The Portland State Vikings topped the Portland Pilots 3-0 on Wednesday night in the Chiles Center to win the opening match of the Nike Invitational. The Vikings claimed three sets with scores of 25-20, 25-23, and 25-16.

After the Vikings jumped ahead to a 4-1 lead in the first set, the Pilots stormed back to level the score. From there the teams exchanged points until PSU (7-3) pushed ahead three of the Pilots. Senior Hannah Troutman disrupted Portland State’s momentum with a kill just before junior Reghan Pukis hammered another two kills down PSU’s line to even the score again. Moments later, the Vikings produced a run to claim a four-point lead late until Pukis and freshman Katie Barker recorded kills trying to spark a comeback. But in the final points of the set, PSU continued their strong defensive stand to prevail 25-20.

With the score tied early in the second set, Troutman collected a pair of kills to give the Pilots (7-3) a 9-7 lead. Moments later with the Pilots still leading by two, Portland State made a run to surge back in front 17-16. Freshman Liz Reich and senior Sarah Savoca then stopped PSU’s momentum by combining for a block, which was followed by kills from Troutman and Reich to bring the Pilots within one. Portland then tied it at 21-21, but the Vikings were soon at match point. Wilson then produced the final point with a kill, putting the Vikings up by two sets.

The Vikings fought to take a 9-6 lead in the third set, before they before eventually leading 19-13 with the help of six kills. Troutman and Pukis put two kills together to halt the momentum, but PSU picked up where they left off after a timeout to continue to hold on to a cozy lead. Catlin Bettenay finalized the set for the Vikings with the match-clinching kill.

The Pilots will play their second match of the Nike Invitational on Friday at 5 p.m. against UTEP.