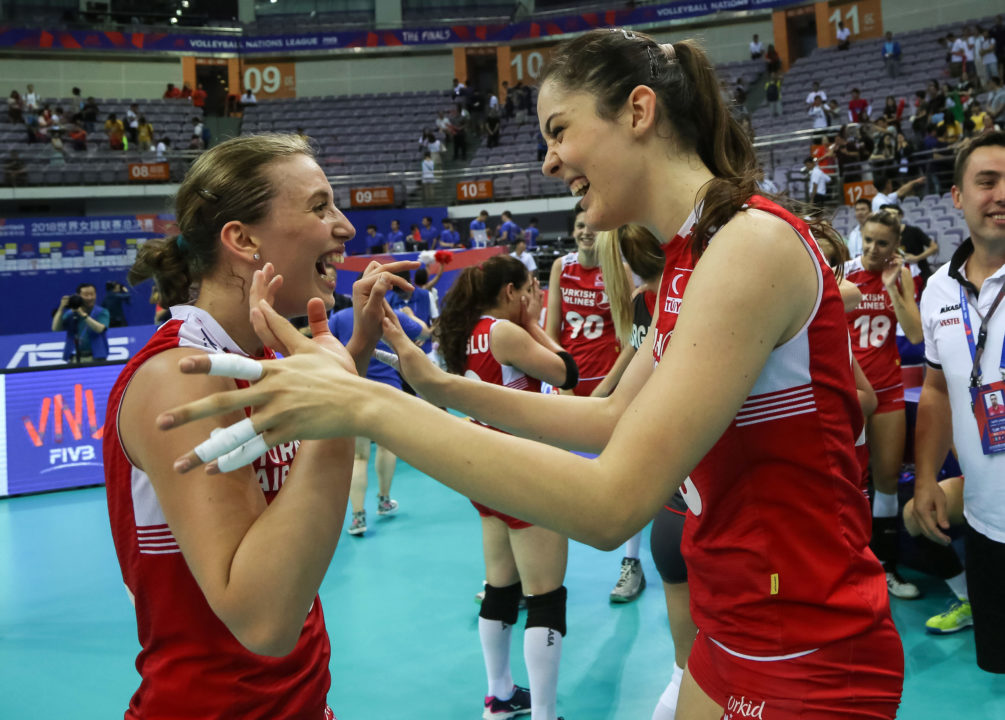 Turkey upended Brazil to reach the finals where they will face USA, who downed host and top-ranked China in four sets. Archive Photo via FIVB

In a match of established power against the tournament’s Cinderella story – Turkey came in ranked 12th in the world – the Turkish side not just downed the 2017 World Grand Prix champs, but did so in straight sets. Each game was right down to the wire, but the result is a sweep for Turkey that puts them one win from Gold while the best Brazil can now do is Bronze.

In the first meeting between these teams, Brazil owned a decisive advantage in attacks. That would not be the case this time, as the Turkish offense actually had more kills (48) in three sets than they did in that four set loss in Turkey back in week two. Brazil was also held to 40 kills, which was in large part to an aggressive Turkey serve that notched more aces (5-2) but really had a wider impact than just the throws that fell to the court. Each side had points of flexing their strong block, but neither held much of an advantage over the other.

The true difference in attack was Turkey’s ability to establish more options. Tandara Caixeta (20 points) was great for Brazil, as was Final Six star Gabriela Braga Guimaraes (14 points). After that though, Brazil had no player surpass four points as Turkey’s star middles shut down Brazil’s (Ana Beatriz Correa) to just one kill on nine tries. In fact, everyone outside of Caixeta and Guimaraes for Brazil had just eight kills on 35 tries.

Besides the defense that Turkey played on Correa and the supporting cast for Brazil, they saw a strong effort from setter Cansu Ozbay (4 points). She distributed an attack with a quartet of double-digit scorers, led by Hande Baladin (14 points), Meryem Boz (14 points) and Eda Erdem Dundar (11 points) – who was also the key cog in limiting Brazil’s success in the middle and keeping them out on the pins.

The result is Turkey will play for Gold tomorrow against the United States in a rubber match with the two splitting tries one and two. For Brazil, they will still have a shot at the top three finish as they go for Bronze against hosts-China.

Turkey coach Giovanni Guidetti: “I am feeling like ‘Do not wake me up.’ I want to continue this dream. It is a good dream. I would say, sometimes, I am the first one to be surprised with how my players are performing. They are going into the court every time with such amazing heart and amazing volleyball skills, simply because without this, it is not possible to be where we are. When I try to teach volleyball to my players, Brazil are our idols, or like a school. We want to learn from Brazil because what Ze Roberto did in all these years with all these players is amazing. They play really good volleyball. For us, this is really something magical today. Maybe, we were fortunate to have this schedule possible, to play two days and we rested yesterday. We recovered and today, we were refreshed. But again, congratulations to my team. My players are doing miracles on the court. This only means, they have great potential.”

Turkey captain Eda Erdem Dündar: “I do not have the words to describe my feelings right now. I will just say I am so proud of the team today and I am very, very excited for tomorrow. I think today, what we did was amazing. This is Brazil, we respect them a lot. They are a great, well-organized team. Today, I guess, we played with patience and concentration. We are so happy we won today. Let’s see how it will be tomorrow.”

Brazil captain Roberta Ratzke: “Congratulations to Turkey, they played so well. I am sad because it is not a good day for us. We played really bad and we made a lot of mistakes that we usually do not commit. It is just not a good game for us. We now have to prepare for the next tournament and try to forget this game to move forward.”

The United States have been at the top through every stage they’ve gone through in this 2018 Volleyball Nations League, and now stand just one match away from doing the same in the playoff stage after taking out the world’s top ranked team on their floor in the semifinals.

The highlight matchup would be Michelle Bartsch-Hackley and the depth of the U.S. Women’s National Team against Zhu Ting and the home nation. That lived up to the billing, but the United States came out and played much more aggressive for the match in earning the four set victory. They did log 22 errors compared to just 13 for China – a very low mark – but instead of it showing a clean match it more so showed the Americans going for it as they notched 10 more kills (65-55), three more blocks (10-7) and the same amount of aces – not to mention seven more digs (48-41).

Bartsch-Hackley continued her star performance, which with a win on Sunday could signal a tournament MVP, as she actually outdid Zhu and recorded 24 points – with 22 kills on 56 tries. Zhu meanwhile was solid with 18 points – all on kills with 43 attempts – but USA did a good job of limiting her from taking over the match like she did in China’s win over Netherlands in the Final Six (36 points).

After that is where the depth comes in for the United States. Simply in terms of point scoring throughout, the Americans got 55 points from everyone else, while China got 48 despite not having the top scorer. Had they made the insertion of Li Yingying (14 points in just two sets) earlier than just subbing on in the third, they may have gotten more, but outside of Li and Zhu, the team had 25 kills on 78 tries.

Meanwhile for the United States, Foluke Akinradewo (14 points), Kelly Murphy (13 points), Tetori Dixon (9 points) and Kimberly Hill (9 points) combined for 36 kills 82 attempts and also added in six blocks and three aces. That balance once again helped USA overcome a player having an off-match or being well-game planned by the opponent, as Jordan Larson had just four kills on 23 tries after being a steady force throughout the Final Six and tournament. That’s why Hill got the start in the fourth and subbed on in the third, as Karch Kiraly pulled the right strings yet again.

Next up, Team USA gets a third shot at Turkey – with the Turkish side winning the first and the Americans taking the second in the Final Six on a comeback from an 0-2 hole – in the most important match possible. For China, they will look to send the home contingent off on a good note if they can defeat Brazil.