Volero Zurich Bounces Back With Sweep In Champions League 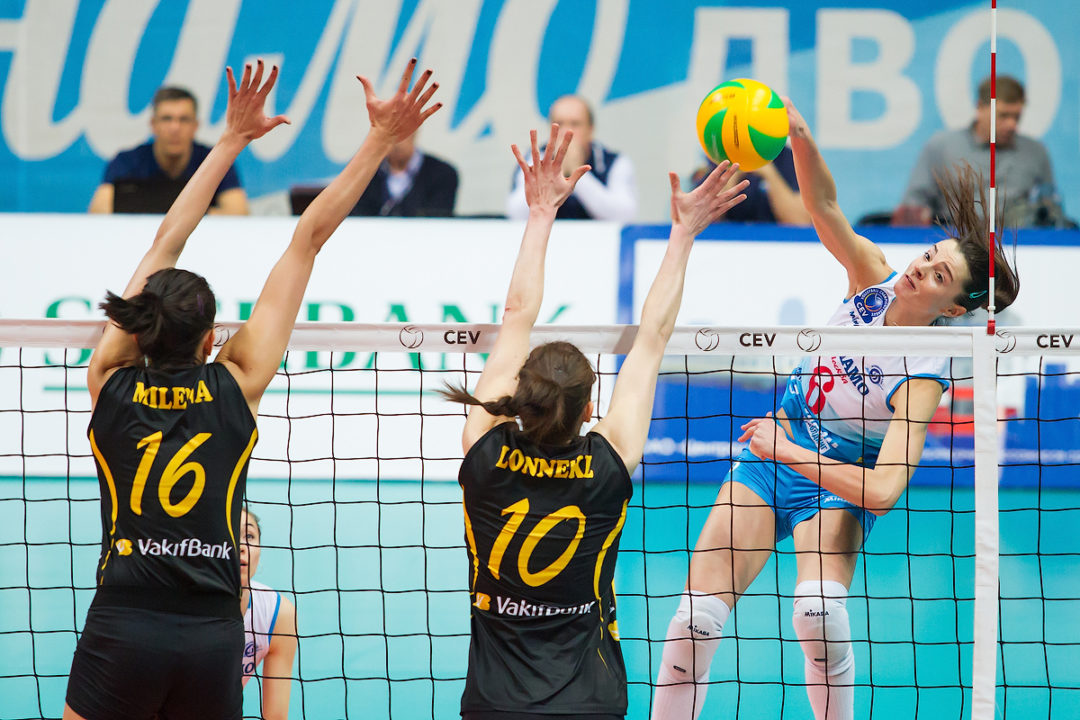 The third leg of the fourth round in the CEV Champions League has concluded, with a number of easy three-set matches taking place while others posed a more challenging task. Current Photo via CEV

The third leg of the fourth round in the CEV Champions League has concluded, with a number of easy three-set matches taking place while others posed a more challenging task. The fourth round of the competition is halfway over at this point, with each team set to play three more matches before the next round matches are determined.

The match was up for grabs after the second set as each squad had won one set to that point but Mulhouse pulled ahead in the third and fourth sets to take the match in four. Leading Mulhouse was Britt Herbots with 17 points while Hayley Spelman and Olga Trach added in another 12 and 10 points, respectively, in the win.

Outside hitter @LazicAlexandra of @VoleroZuerich analyses the 3-0 win over @KSDevelopres in the #CLVolleyW last night: "We start to find each other, I think the difference today was that we start to do it together." pic.twitter.com/b87TODAtpi

Novara had no troubles running through their opponents, aside from a third set lapse. The remaining three sets were won by a large margin, with not much effort on the Italian side needed. Paola Egonu led Novara with 17 points while Celeste Plak posted another 16. Three other players recorded double-digit points in the win – Stephanie Enright (14), Lauren Gibbemeyer (13) and Cristina Chirchella (11).

In Novara they're already looking forward to the next match. @Lauren5Gibby: "I don't think they're (@vk_agel) are gonna give up. They will come with a very good serve, so we have to be ready in reception." #CLVolleyW @IGOR_Volley pic.twitter.com/tWLObJZ11t

Imoco fought back from a 0-2 deficit to take down Fenerbahce in five sets. Leading Imoco was Samanta Fabris with 20 points while Samantha Estephania Guadalupe Bricio Ramos and Robin De Kruijf posted 18 points apiece. Also adding double-digit points were Kim Hill and Anna Danesi with 15 and 10, respectively.

Dinamo ran straight through Vizura in their fourth-round match with no troubles. Leading the charge was Natalya Mammadova with 13 points while Irina Voronkova and Elitsa Vasileva posted 11 and 10 points, respectively.

Chemik Police was able to down Maritza in straight sets, with just the second set posing any difficulties for the Polish team. Leading Chemik Police was Katarzyna Zaroslinska-Krol with 17 points while Natalia Medrzyk and Malwina Smarzek recorded 15 and 13 points, respectively.

???This rally is on FIRE!???@kpschemikpolice and @volleymaritza give it their all in the fight for the second set! Let's hear it for these teams!#CLVolleyW pic.twitter.com/By3SHrYBVl

The Turkish squad took down the Polish side in three-sets with not much trouble on their side. Galatasaray was led by Dobriana Rabadzhieva with 15 points while Neslihan Demir Guler and Tatiana Kosheleva posted 10 points apiece in the win.

VakifBank continued their dominance in the Champions League with a three-set win over Dinamo Moscow. The Turkish side was led by Zhu Ting with 16 points while Gozde Kirdar and Milena Rasic posted 14 and 10 points, respectively.