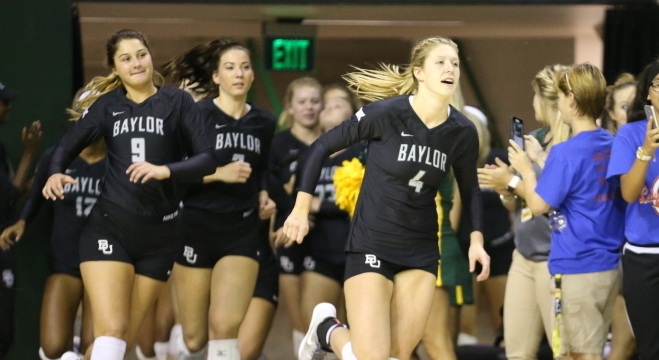 For the first time in five years, Baylor is heading to the NCAA Tournament. Perhaps no player has been more integral to the team’s success this season than junior outside hitter Katie Steiger. Current Photo via Baylor Athletics

For the first time in five years, the Baylor Bears (21-11, 9-7 Big 12) are heading to the NCAA Tournament — following Baylor’s first winning Big 12 record in seven years.

And perhaps no player has been more integral to the team’s success this season than junior outside hitter Katie Steiger.

Her performance against Iowa State combined with her 31 kills against Texas Tech earlier in November made her the third-ever Baylor player to record 30 or more kills in multiple matches and the only Big 12 hitter to record more than 30 kills in a match this season.

She also set a school record for single-season kills during the Iowa State match, eclipsing Elisha Polk’s 620 kills in 1998. She was named an All-Big 12 First-Team pick on Tuesday.

“I’m so proud,” Staiger said on Sunday. “I can’t even put it into words. No one has ever made any excuses. We’ve just shown up every day and worked hard. We’re starting to see it pay off. It’s so exciting.”

Baylor will face San Diego on Friday at 5:30 p.m. PT in the first round of the NCAA Tournament.