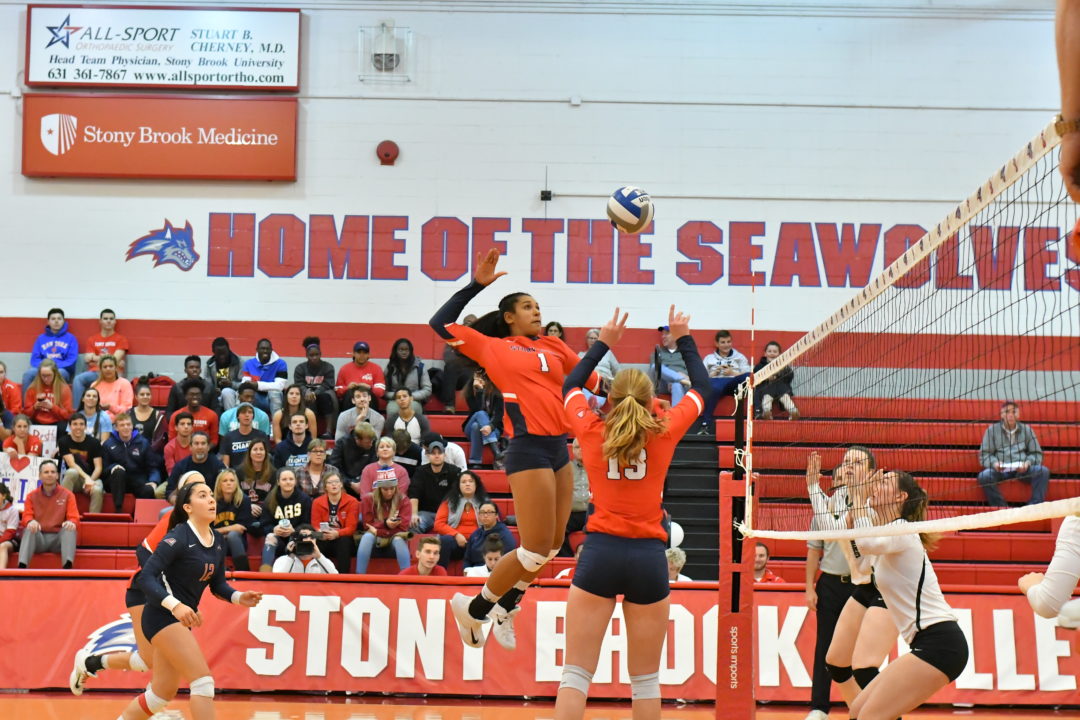 Sometimes you have to do something you have never done before to take your team somewhere they have never been before. That is the case for this week’s Player of the Week, McKyla Brooks of Stony Brook.

The junior middle blocker nearly doubled her season output in kills and blocks per set in the team’s upset wins over top seeded Albany and No. 2 seed Binghamton en route to the America East Tournament Championship and the team’s first trip to the NCAA Tournament.

Brooks averaged 5.00 kills and 2.00 blocks per set in sweeps of top seed UAlbany and Binghamton en route to Most Outstanding Player of the America East Championships honors. The Blasdell, New York native led the fourth seeded Seawolves in both matches and closed out each set of the championship match with a kill or block. She accounted for 16 kills, while hitting .353 and adding five blocks and an ace vs. UAlbany then notched 14 kills, 7 blocks and hit .462 vs. Binghamton in the championship match. For the season, Brooks has averaged just 2.69 kills and 0.83 blocks per set.

Melanie McHenry, Louisville – So., OH
Averaged 5.38 kills, 1.88 digs and 1.00 blocks per set, while hitting at a .327 clip in wins over NC State (3-0) and North Carolina (3-2); Posted 13 kills, seven digs, six blocks and an ace, while hitting .343 against the Wolfpack; downed 30 kills, while hitting .318 and adding eight digs and two blocks vs. UNC;became  the first Cardinal to record 30 kills in a match since 2011 (Lola Arslanbekova vs. Illinois 9/17/11); put down five killsin the fifth set to help the Cards finish off UNC, the first win for the Cards over the Tar Heels since joining the league in 2014. ACC Player of the Week

Erica Haslag, Bradley – Jr., OH
Averaged 6.33 kills and 4.17 digs per set in the final two matches of the season for Bradley while boasting a .302 attack percentage; posted a school record for kills in a three-set match under the 25-point set format as she finished with 20 kills and 10 digs in Friday’s sweep of Evansville; hit .314 against Indiana State on Saturday, finishing with 18 kills, 15 digs and one ace; Missouri Valley Player of the Week

Emily Butters, Jr., L, Missouri State
Averaged 7.14 digs per set while helping the MSU defense limit opponents to .096 hitting in two road wins; scooped 23 digs and had seven assists in a sweep of Valparaiso on Friday; set MSU’s single-season digs record during the first set at Loyola, finishing with 27 in the match along with six assists and an ace Saturday as the Bears completed an 18-0 MVC season; Missouri Valley Defensive Player of the Week

Sierra Nobley, Boise State – Sr., OH
Averaged 5.33 kills per set to help Boise State close the regular season with wins over San José State (3-0) and Nevada (3-0); tallied 32 kills on a .368 hitting percentage between the two matches; posted 11 kills, one service ace in the sweep of SJSU; notched 21 kills on a .386 attack percentage in Saturday’s victory over Nevada; Added 12 digs and three blocks over the two contests; Mountain West Offensive Player of the Week