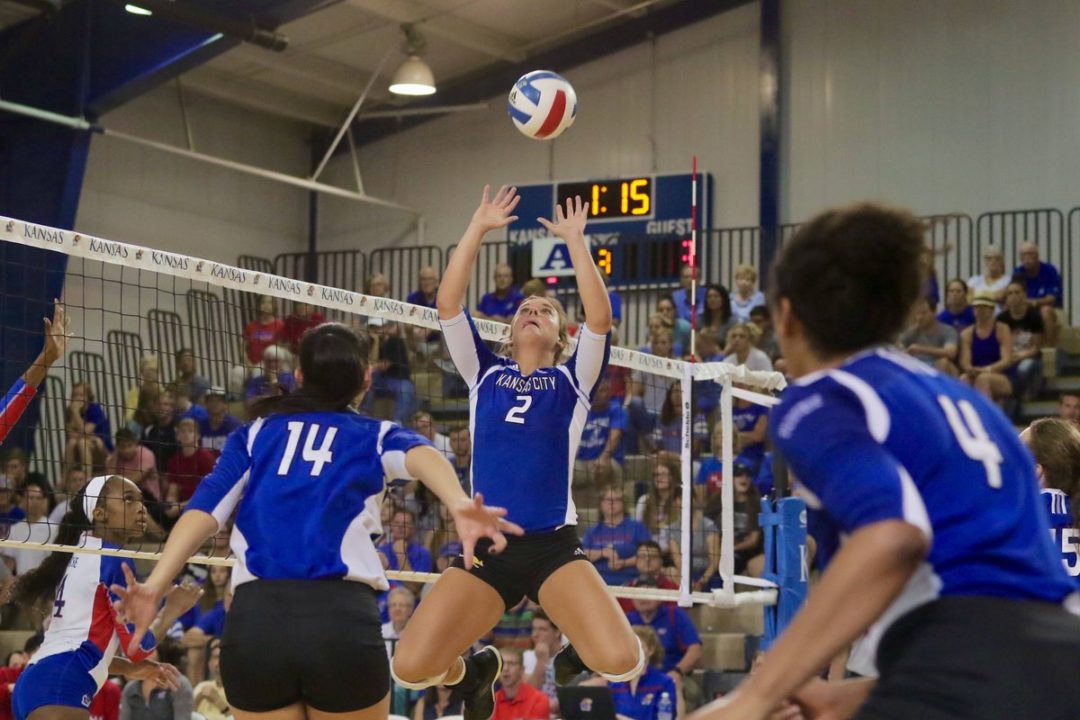 Individually, Kansas City’s Tyrecia Lukes leads the WAC in hitting percentage (.458) while Utah Valley’s Kazna Tarawhiti is the leader in kills (4.07) and points (4.57). UT Rio Grande Valley’s Debora Nazario is tops in assists (10.11) and Grand Canyon’s Kayla Matthews is the leader in service aces (0.39). Utah Valley’s Jasmine Niutupuivaha is the blocks leader (1.08) and Chicago State’s Megan Klavitter is the best when it comes to digs (5.21).

On Sept. 7, Utah Valley defeated NC State in five sets for its first-ever victory over a foe from the Atlantic Coast Conference. With the three victories, UVU captured the Wolfpack/Camel Invitational and has now won six straight matches and seven of its last eight.

UT Rio Grande Valley picked up what is considered to be the biggest victory in regular season program history, knocking off No. 15 Baylor in five sets on Sept. 8. It is believed to be UTRGV’s first-ever victory over a ranked Division I institution. It is UTRGV’s second-straight win over Baylor, which knocked off No. 2 Wisconsin the previous day. Barbara Silva recorded a career-high 21 kills, while Dubravka Vukoja dished out a season-high 46 assists. Gysell Zayas added 26 digs en route to tournament Best Defender honors and Alexandra Ecker recorded a season-high eight blocks en route to tournament Best Blocker honors.

When it defeated Arizona in five sets on Sept. 8, it was NM State’s first-ever victory over the Wildcats. What’s more, the win is the Aggies’ first over a Power-5 school since defeating North Carolina on Aug. 30, 2008 and the first win at home over a school from a power conference since defeating Texas Tech on Sept. 10, 2003. The victory also extended NM State’s home winning streak, which dates back to the 2017 season, to 16 matches.

Chicago State junior Megan Klavitter became the only active player in the WAC with 1,000 or more digs on Sept. 8 at Georgia State. She currently has 1,036 digs and leads the WAC with a 5.21 digs per set average this season.

NM State senior outside hitter Tatyana Battle recorded her 1,000th career kill on Aug. 31 against Florida Gulf Coast. The only current WAC player with 1,000 or more kills, Battle has 1,081 on her career.

UT Rio Grande Valley currently has two of the best blockers in program history. Alexandra Ecker already holds the program record for block assists (309) and last week moved into a tie for total blocks (341). Meanwhile, Barbara Silva ranks fifth in block assists (233) and ninth in total blocks (251). The duo also join WAC Preseason Player of the Year Ragni Steen Knudsen to rank in the Top 10 in hitting percentage. Ecker is second (.287), Silva is fifth (.245) and Knudsen is eighth (.227). Knudsen also ranks ninth all-time in program history in kills (974) and looks to become the ninth member of the UTRGV 1,000-kills club.