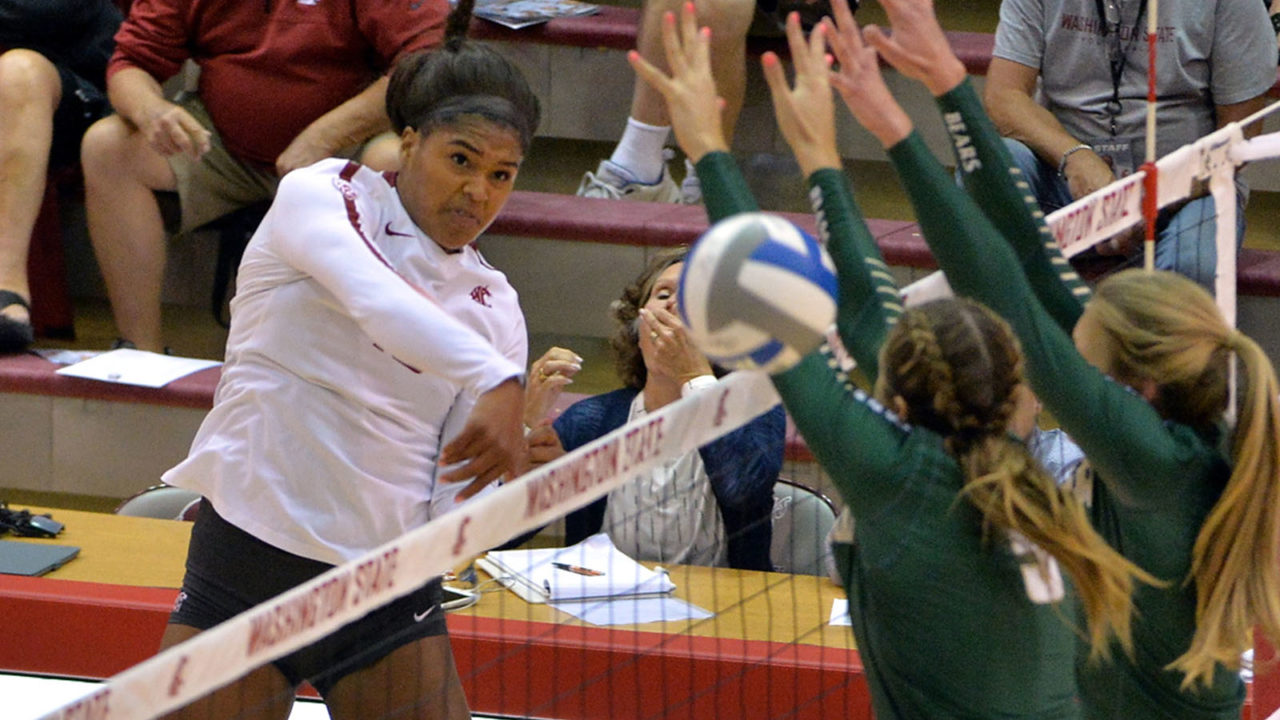 FAIRFIELD, Conn. – Fourteen blocks and a .300 hitting percentage lifted Washington State to a sweep of Fairfield and to the Fairfield Tournament title on Saturday.

Fairfield took an early 10-6 lead as WSU commited five errors. The Cougars cut the margin to one at 16-15 on a Martin kill. A Urias putaway knotted the score at 18 starting a string of nine ties in the match. A pair of Washington State errors gave Fairfield its first set point try at 24-23. WSU thwarted that one on a Mims kill and two more with Woodford putaways. The Cougars earned their first set-point chance at 27-26 on a solo stuff by Urias. A Kaitlin Fisher kill kept the set going for the Stags, but WSU ended the stanza on a Mims kill two plays later.

Washington State jumped ahead 7-3 in Set 2 with help from a trio of Mims kills. The Cougars upped the edge to 13-7 on a Fairfield error and later put together a 6-2 run to push the lead to eight at 19-11 with back to back blocks by Mims and Lajos. A Garcia putaway slowed WSU temporarily, but the team wrapped up the 25-14 win with six of the final eight points. A Martin kill closed out the victory.

Woodford turned in four kills as the Cougars took a 14-7 lead in Set 3. Down 18-10, the Stags narrowed the gap to five with a Garcia kill and two WSU miscues. Two more kills and a block by Woodford gave Washington State a 23-16 edge. An Ashley Brown kill gave the Cougars a match-point try at 24-17. A block by Savanah Smith and Urias gave WSU the win and tournament title.

A career-high 17 kills by Taylor Mims led the Washington State volleyball team (8-1) to a 29-27, 25-14, 25-17 win over Fairfield University (4-6) Saturday night at the Fairfield Invitational at Alumni Hall in Fairfield, Conn. This was the second time in two days WSU defeated Fairfield 3-0.

Mims, a junior outside hitter, tallied her 17 kills while hitting .306 and had seven digs and four blocks. McKenna Woodford added 15 kills, hit .357 with eight digs and two blocks. Claire Martin, a junior moved to the opposite hitter position this season, had seven kills, hit .417 and had four blocks.

Jocelyn Urias and Ella Lajos, new to the Cougars front row starting spots in 2017, each had seven blocks today. Setters Ashley Brown and Penny Tusa each had 19 assists with the freshman Tusa serving two of WSU’s three aces. Alexis Dirige led the match with a dozen digs.

WSU won the digs category 48 to 28, and equaled a season-best 14 team blocks while Fairfield had only two blocks. The Cougars hit .300 for the match and held the Stags to a .064 hitting percentage.

WHY & HOW…
WSU Head Coach Jen Greeny said, “It was a tough first set and they came out with some different things. Skyler Day didn’t play last night and she’s a great player coming back from an injury and able to play tonight so we had to adjust to that. I was really proud of the way we fought and took that first set and the momentum carried over from there.

“A little bit of that first set can be attributed to Casey Schoenlein going down and us trying to get our footing and figure some things out. I think we settled down and Savanah Smith did a nice job adjusting to that, especially as a freshman.

“Fantastic numbers for outside hitters. I thought both Taylor and McKenna played extremely well tonight and that’s what we need. Every night is not going to be quite this good when we get into Pac-12 play but they really took care of the ball tonight.

“Any time we have a hitting percentage like that, a lot of credit goes not only to the setters but to the passing as well was good tonight. Our setters, especially Penny Tusa, another freshman, are getting used to who they are setting, what kind of tempo we want to run, what plays are working and what rotation we’re in so that is nice to see.”

Junior outside hitter Taylor Mims said, “We really just dug in and I think started respecting that this team really wants a piece of us. I think we just played more with a killer mentality and everybody wanted the ball. It was a good game and I think we have more in store.”

This is Jen Greeny’s 99th win as the head coach at WSU.
Senior Opposite Casey Schoenlein injured her leg in the first set and did not return to action. Freshman Savanah Smith saw action in only her second match at WSU.
Fairfield defeated New Hampshire 3-1 in a match earlier today.
Coming into the match, WSU was leading the Pac-12 in low opponent hitting percentage.
Cougars wore their white jerseys tonight but Fairfield was the home team.
WSU is 29th in this week’s AVCA Coaches Poll.
Attendance: 217

A marathon first set, which included 14 ties and five lead changes, highlighted the Stags’ performance in the rematch with Washington State. The Stags served for set point three times in the frame but could not put away the Cougars – an NCAA Second Round qualifier last season and a team currently receiving votes in the AVCA Division I Coaches’ Poll. Ultimately, Washington State took the frame, 29-27, and pulled away to a 3-0 win with victories of 25-14 and 25-17.

Day led the attack once again in the night cap, hammering nine kills. Garcia added seven, with Butts and Fisher each contributing five finishers. Radulovic punched home three kills, and Nicolini and Sydney Williams each registered one. Nicolini doled out 29 assists from the setter spot.

Defensively, Rudeen had a team-best nine digs and Day picked up seven. Day, Williams, Fisher and Butts each had a hand in one of Fairfield’s two team blocks.

Taylor Mims led Washington State with 17 kills on .306 hitting, and McKenna Woodford added 15 while swinging at a .357 rate. Setters Ashley Brown and Penny Tusa each distributed 19 assists as the Cougars hit an even .300 for the match. Alexis Dirige helmed the back row with 12 digs from the libero position, and Jocelyn Urias and Ella Lajos each got a piece of seven blocks as Washington State rang up 14 total send-backs.

Up next, the Stags wrap up the non-conference schedule this Tuesday, Sept. 12 at St. John’s. MAAC play begins next weekend, Sept. 16-17, with back-to-back trips to Iona and Manhattan. Action returns to Alumni Hall the following weekend for a visit from MAAC Volleyball’s New Jersey contingent – Rider and Saint Peter’s – on Sept. 23-24.