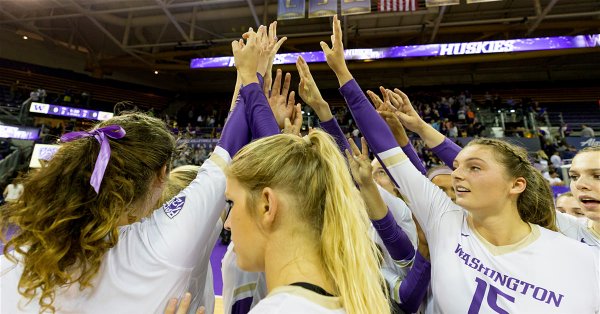 Washington put up nine blocks and outhit Arizona a season-high .333 to .173 to snap the Wildcats’ two match win streak on Friday night.

Kendra Dahlke racked up a match-high 18 kills, while hitting .382 and adding six digs. Candice Denny and Devyn Cross followed with six putaways each.

It was a team effort tonight in Tucson for @UWVolleyball.

Catch the highlights from the Huskies' sweep over the Wildcats. 🎥 pic.twitter.com/GCIYAAZRFP

UW hit .385 in the opening stanza, while limiting Arizona to a .097 effort. The Huskies raced out to a 12-4 lead with help from four kills and a block by Bajema. Two Dreschel putaways and two miscues put Washington ahead 16-8. Arizona cut the margin to five at 19-14, but four Wildcat errors helped the Huskies finish off a 25-18 win.

The Huskies hit .293 in the final stanza, while UA made eight errors and hit just .152. Washington went up 8-3 in Set 3 and built a six-point advantage at 18-12. Arizona rallied to within one with five straight points and eventually pulled even at 23. UW called timeout and got a Drechsel kill and help from a Wildcat miscue to wrap up the sweep at 25-23.

The Wildcats played without the services of outside hitter Paige Whipple, who is out this weekend with a concussion.

Next up, the Huskies head to Tempe for a 3 p.m. ET Sunday meeting with Arizona State. Arizona, meanwhile, plays host to #20 Washington State at 3 p.m. ET.