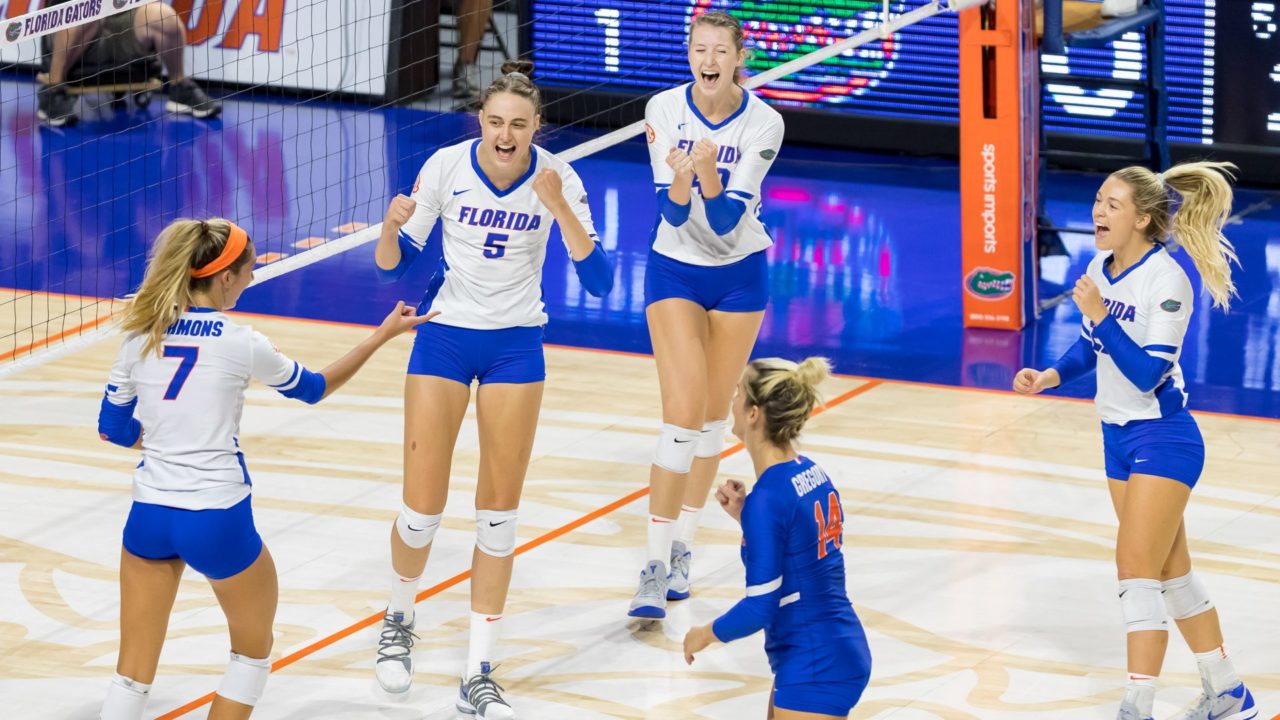 Kentucky stayed perfect at 4-0 with a road sweep at Mississippi State, while Florida, Arkansas and Missouri won at home. The Gators and Razorbacks pulled out five set wins, with Florida hanging on for victory to move to 5-0 and Arkansas overcoming a 2-0 deficit for its first league win. Current Photo via Florida Athletics

Kentucky stayed perfect at 4-0 with a road sweep at Mississippi State, while Florida, Arkansas and Missouri won at home. The Gators and Razorbacks pulled out five set wins, with Florida hanging on for victory to move to 5-0 and Arkansas overcoming a 2-0 deficit for its first league win.

Match of the Night:

Florida registered its 10th straight win, holding on to move past Texas A&M in five sets in a battle of SEC unbeatens in Gainesville, Florida, on Friday.

Hollann Hans posted a career and match-high 32 kills and 11 digs to pace the Aggies, but her nearest help came from Samantha Sanders, who managed nine putaways. Makena Patterson and Camille Connor added six and five kills respectively, while each putting up three blocks.

Florida raced out to a 10-5 lead in the decisive fifth set, before staving off the Aggies one final time for victory. Four Texas A&M errors and three Carlton kills gave Florida the five-point advantage it needed in the last stanza. The Aggies sliced the margin to one at 11-10 with four kills and thwarted two match-point tries at 14-11 before succumbing. Up 14-13, the Gators called timeout and Hall came through to end the match. Florida hit .333, committing just one error in the final stanza.

Kentucky used an efficient offensive effort, hitting at a season-best .537 clip for the match, including a final .824 effort, to move past Mississippi State. The Wildcats held the Bulldogs to a .068 hitting effort, marking the sixth straight match the team has held opponents under .200.

UK nearly doubled MSU’s offensive output, posting 41 kills to 21, while also outdoing the Bulldogs 8-2 in aces and 7-3 in blocks.

Of the eight players with a hitting attempt in the match, just two Wildcats committed an error. Brooke Morgan was a perfect 9-for-9, hitting at a 1.000 clip. Alli Stumler added eight putaways on a .667 effort. Leah Edmond chipped in seven kills and seven digs, but hit just .176 (7-4-17). Morgan and Madison Lilley paced the team at the net with three blocks apiece. Lilley also served up three aces.

The teams tied seven times in Set 3, last at 8-all, before the Wildcats closed out the night with a 17-5 run. Four MSU miscues and aces by Lilley and Cameron Scheitzach aided the final rally, which saw Morgan tally five kills and a block. The Bulldogs thwarted two match-point tries at 24-12, before Edmond pounded down the final putaway.

The Tigers stayed perfect at home, outdoing South Carolina in every way in a Friday sweep.

Set 3 featured 19 ties and nine lead changes, although neither side led by more than three at any time. South Carolina used a 3-0  run, including kills by Edwards and Jess Vastine to go up 16-13. Missouri answered with an 8-3 run including two kills and two blocks by Munlyn to go up 21-19. The Gamecocks had the first shot at the set at 24-23. The Tigers called timeout and earned a try of their own at 25-24 then thwarted two South Carolina efforts (26-25, 27-26). Mizzou ended the night on a 4-1 run with a kill and a block by Munlyn and two Hollingsworth putaways.

Arkansas rallied from down 2-0 to win three straight sets to claim its first SEC win of the year.

Emily Stroup posted 20 kills and 22 digs to guide the Rebels, while Caitlin Wernentin chipped in 17 putaways. Bayleigh Scott led the team at the net with six blocks, while Jordan Fate chimed in with a 26-assist, 13-dig double-double.

The teams tied eight times in Set 5, last at 9-all, before the Razorbacks closed out the comeback win with a final 6-4 push. Arkansas gained separation with a 4-0 run, including two Dirrigl putaways, to make it 13-9. A Pamphile putaways put the Razorbacks on the hill at 14-11. Stroup posted two kills to keep the match going. A Brown putaway marked the final blow in the home victory.