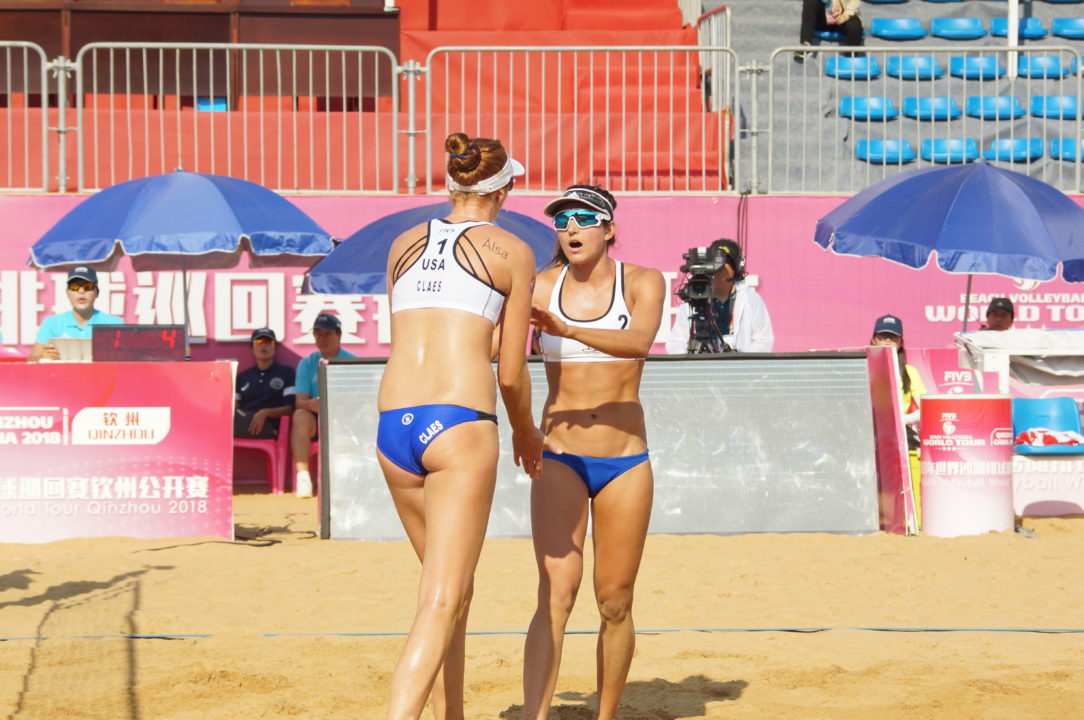 Russia’s No. 7 Ekaterina Birlova/Evgenia Ukolova and Brazil’s No. 16 Ana Patricia Silva Ramos/Rebecca Cavalcanti Barbosa Silva are set to face off in the second semifinal with a place in the championship match on the line.

The two losing sides will meet in the bronze medal match at approximately 1:55 a.m. ET Thursday, while the victors will face off for gold at 2:55 a.m. ET.

Menegatti/Orsi Toth are aiming for their second FIVB title of 2018 after winning gold at the Agadir Two Star (July 29). The team has finished in the top 10 in all three of its 2018 FIVB events, placing fifth at the Moscow Four Star (Aug. 12) and ninth at the Vienna Five Star (Aug. 5).

Claes/Sponcil are in their first FIVB event as a pairing. Claes began the 2018 season with collegiate teammate Sara Hughes, finishing ninth at the Hague Four Star (Jan. 7) and Fort Lauderdale Five Star (March 4). She then teamed up with Brittany Hochevar for the remainder of the season, earning a runner-up finish at the Xiamen Four Star (April 22), a fourth-place effort at the Warsaw Four Star (July 1) and fifth place finish at the Espinho Four Star (July 7) among six appearances.

Sponcil is playing her fourth FIVB event of 2018 after finishing third with Caitlin Ledoux at the Haiyang Three Star (July 22), fifth at the Toyko Three Star (July 29) and ninth at the Vienna Five Star Major (Aug. 5). Sponcil played the latter two events alongside Lauren Fendrick.

Birlova/Ukolova are looking for their second podium finish of 2018, following a bronze medal at the Anapa One Star (July 8). The pair also was fifth at the CEV European Championships and Agadir Two Star (July 29) among eight competitions.

Ana Patricia/Rebecca are in their fifth FIVB tournament as a pairing, playing in Moscow Three Star in 2017 and competing at the Fort Lauderdale Five Star (March), Espinho Four Star (July 7) and Gstaad Five Star (July 15) in 2018. The pair’s best finish was ninth place in Espinho.