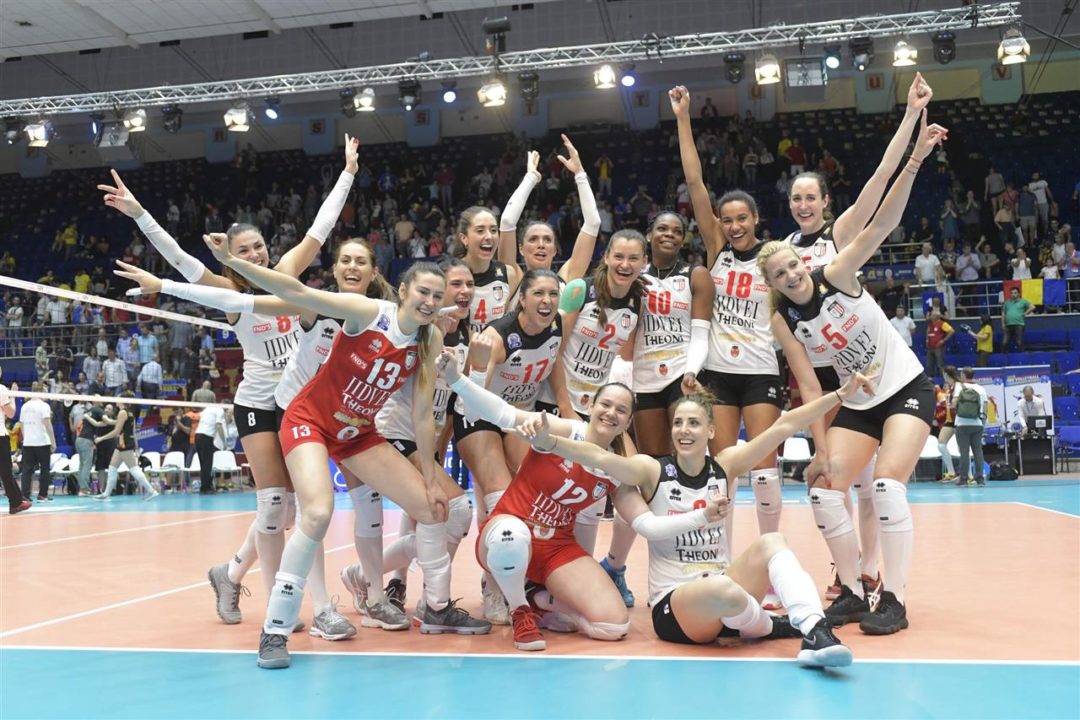 Hear from both the winners and the losers after the Champions League semi-finals. Current Photo via CEV

As Sunday’s medal matches at the 2018 CEV Women’s Champions League begin, we rewind to Saturday for post-match interviews with both the winning and losing teams.

After the first semi-final, both teams were almost in awe of the spectacle of their own making.

“I thought both teams played really well,” said American Kelsey Robinson of VakifBank. “It was a high level match. Some of the best volleyball I’ve ever seen.

“I think sometimes we let off the gas a little bit. I think we got a little comfortable, and it was a do or die in that moment and we had to win to move on. So, once the 5th game started, I thought everybody’s eyes were firing and ready to go for each point.”

“At this level, you are never dead until you are really dead, so you have to really believe in every ball,” said VakifBank coach Giovanni Guidetti. “I am really lucky that the person that entered (when the team was down 12-9, Melis Gurkaynak) placed 3 really great serves, played 3 really great defenses.

No mention was made after the match of the health of Zhu Ting, who missed most of the 3rd set and seemed bothered late as a result of a minor right ankle injury.

“Tomorrow, for sure will be a very different match. We will play a team (Alba Blaj) that plays more slowly, and for sure our block will have an easier time, but we will need to attack better. I expect from my players better attack tomorrow.”

Imoco star Samantha Bricio said that her team had fun after losing 3-2 in an instant-classic where her team almost came back from an 0-2 deficit, to the extent that  they led the tie-breaker set 12-9.

“It was a pretty interesting game, we had a lot of fun,” Bricio said. “That was our most important thing. We just came here with a mindset of doing our best work and just having fun and that’s what we did. Unfortunately, it wasn’t enough at the end, but I think overall it was a pretty good game.”

Galatasaray coach Ataman Guneyligil was almost-tearful after his team’s 3-1 lost to the hosts Alba Blaj in the second semi-final.

“I am so sorry,” Guneyligil said. “I feel bad. Because we didn’t put our game on the court today. In technique, in tactic, and in emotion. But, I have to congratulate Alba Blaj, because they played perfect, they played with courage, and they wanted it so much more than us.”

“This was our dream,” said Alba Blaj veteran middle blocker Natasa Krsmanovic, who had 10 points, including an efficient 8 kills on 10 swings, in the match. “Somewhere, we dreamed about this, that we can go to the final, and it has happened. I want to congratulate my team for fighting, for believing, that we can go to the final tomorrow. I think we already did a great job for Romanian volleyball, for Alba Blaj, for this club.

Krsmanovic says that her team is going into the match relaxed, without pressure, knowing that VakifBank are the favorites. She says that she’s playing to win, and thinks her team still has ‘something amazing in them,’ but that even if they don’t win “it will be fine.”