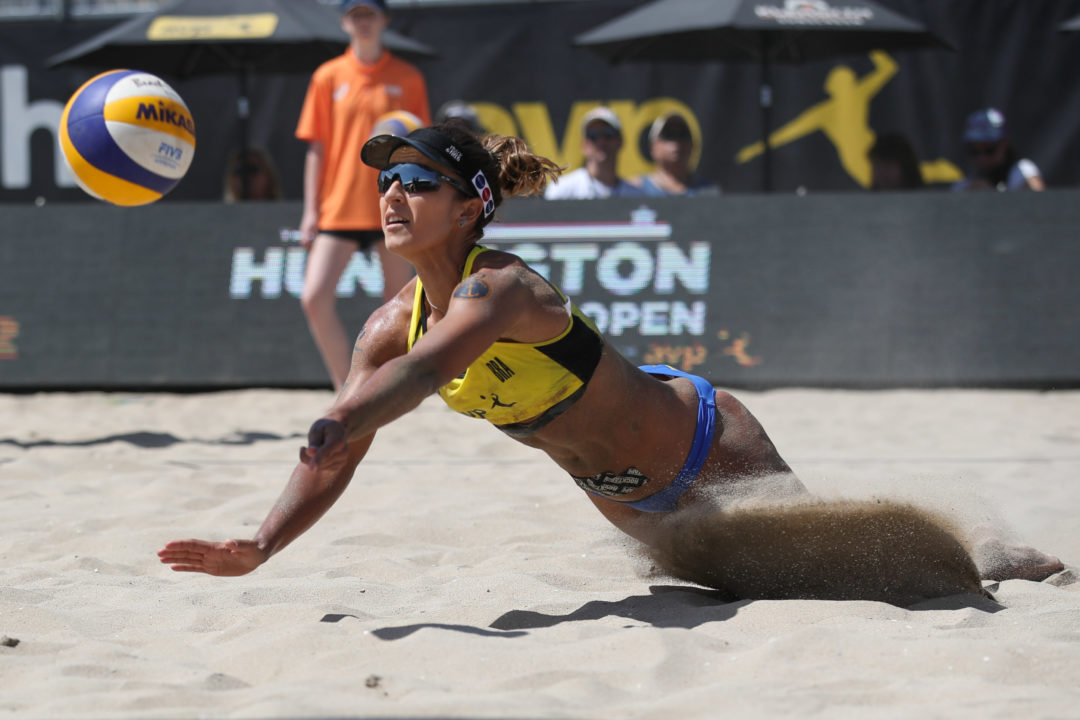 The Huntington Beach Open is coming to the small screen. The finals will air live on NBCSN at 7 p.m. ET Sunday.

On the women’s side, Brazil will have two shots at a medal with No. 5 seed Barbara Seixas de Freitas/Fernanda Alves and No. 6 seed Maria Antonelli/Carol Solberg Salgado advancing to the semifinals. Joining them are No. 2 seed Sarah Pavan/Melissa Humana-Paredes of Canada and No. 3 seed Chantal Laboureur/Julia Sude of Germany.

The Brazilian pairs are on opposite sides of the bracket with Barbara/Fernanda taking on Pavan/Humana-Paredes at 11:30 a.m. ET Sunday and Maria Antonelli/Carol facing Laboureur/Sude in the semifinals at 12:30 p.m. ET.

Pavan/Humana-Paredes are seeking their third straight gold medal, following a top finish at the Gold Coast Commonwealth Games on April 12 and the Xiamen Four Star on April 22.

Maria Antonelli/Carol finished second at the Hague Four Star in January and are seeking their first gold since the Hague Three-Star in June 2017.

Laboureur/Sude are looking for their first FIVB podium finish since winning the Gstaad Five Star in July 2017, having finished fifth five times since then.

On the men’s side, No. 2 seed Evandro Goncalves/Andre Loyola Stein (Brazil) and No. 9 Aleksandrs Samoilovs/Janis Smedins (Latvia) are still in the medals race after making it through the main draw undefeated, while seventh-seeded Dutch pair Alexander Brouwer/Robert Meeuwsen and Spain’s 12th-seeded Pablo Herrera/Adrian Gavira round out the semifinal field.

Brouwer/Meewsen will take on Samoilovs/Smedins in the semifinals at 1:30 p.m. ET Sunday, while Evandro/Andre will face off with Herrera/Gavira at 2:30 p.m. ET.

Samoilovs/Smedins are looking for their first podium finish since earning bronze at the Fort Lauderdale Five Star in March and for their first FIVB gold since winning the Klagenfurt Major in July 2016.

Brouwer/Meeuwsen are seeking their fourth podium finish in 2018, following golds at the Aalsmeer One Star (March 18), Doha Four Star (March 10) and bronze at the Hague Four Star (Jan. 7).

Evandro/Andre are in search of their first FIVB gold since winning the World Championships in Vienna in August. The pair was second at the World Tour Finals in Hamburg later the month. This is just their second FIVB event of 2018 following a 17th-place effort at the Fort Lauderdale Five Star in March.

Herrera/Gavira have already secured their best FIVB effort since a runner-up finish at the Hague Three-Star in June. The duo was fifth at the Fort Lauderdale Five Star in March and has since finished ninth at the Doha Four Star and Xiamen Four Star.