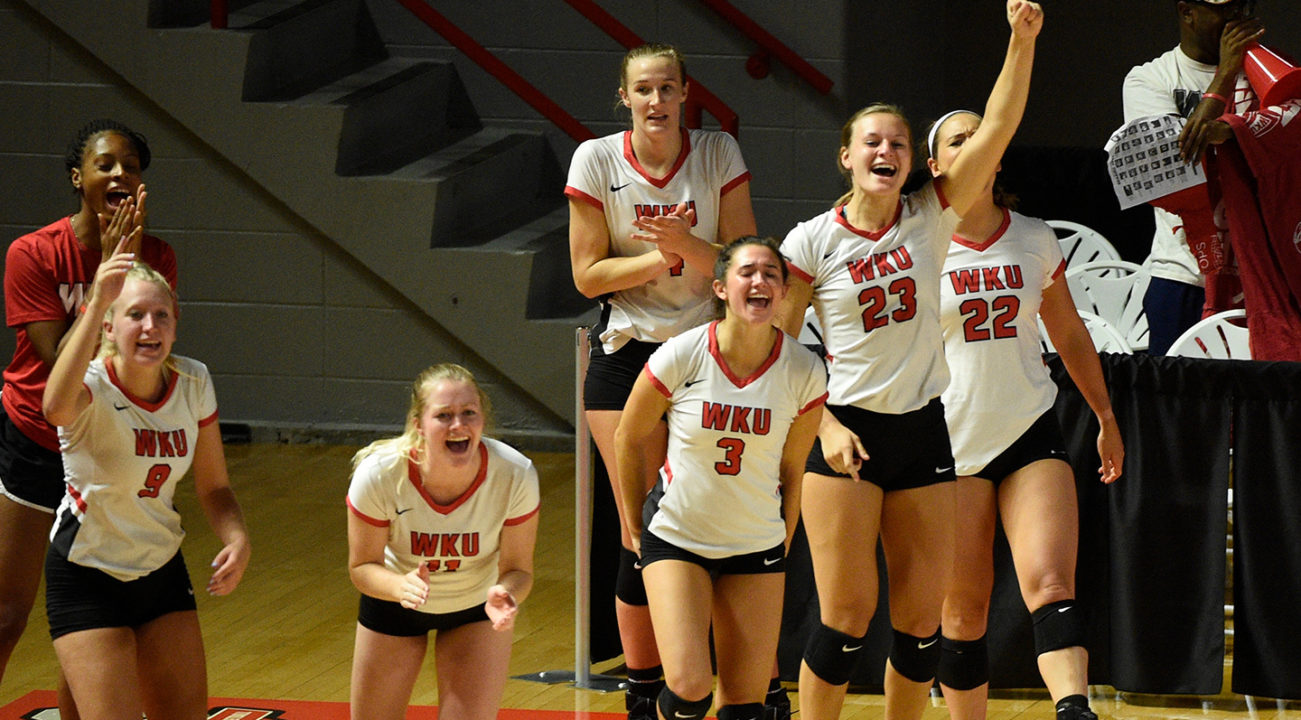 WKU Volleyball opened its 2018 home slate with a sweep of Belmont to extend its home win streak to 24-consecutive matches – the longest in the nation.  Current Photo via Western Kentucky Athletics

BOWLING GREEN, Ky. – WKU Volleyball opened its 2018 home slate with a sweep of Belmont to extend its home win streak to 24-consecutive matches – the longest in the nation. The Lady Toppers improved to 2-2 following a balanced effort on both sides of the ball Tuesday night.

“It was nice to get out here on our home court and get the jitters out for all these new faces,” head coach Travis Hudson shared. “I love our kids and I love how hard they work. Tomorrow is a more important day than today, because tomorrow we get to get back in the practice gym and continue to work to be better.”

Senior All-American Rachel Anderson tallied her fourth-straight match with double digit kills, racking up 11 to lead WKU for the fourth time this season. Right behind her, Sophia Cerino registered 10 kills – her second double-digit effort of the year.

“I thought Sophia really made big plays and was really aggressive throughout the night,” Hudson shared.

As a team, the WKU offense posted its most efficient outing yet, operating at a team hitting percentage of .321. The Red and White notched 40 collective kills from seven different players while five different players dished out assists.

WKU claimed its first opening set of the season over the Bruins in a 25-16 decision. Anderson found the floor for five kills on eight swings in the frame while the team worked at a .323 clip and racked up 16 digs defensively.

Set two, the closest of the three, was claimed by WKU in a 25-21 fashion. Belmont owned a slim lead at 19-18 but the Red and White put together a late run of four points off the serve of Emma Kowalkowski – including an ace – to grab a 22-19 lead they wouldn’t relinquish.

Following the break, Belmont jumped ahead to a quick 4-2 lead but WKU would string together one of its longest runs of the year to secure the sweep. During the serves of Hallie Shelton and Katie Shunk, WKU posted an 8-1 run to double up Belmont. The Bruins pulled back within four late in the set but couldn’t break through as the Lady Toppers swept their first match of the season after leading the NCAA in sweeps a season ago.

Behind the service line, WKU notched seven aces including three from Cerino and two more from Shunk.

Payton Frederick led the Lady Toppers in digs for the second straight match with nine, playing the final set as the Red and White’s libero. With 12 players seeing action in the match, all but one Lady Topper recorded at least one dig in the win.

At the net, WKU out-blocked Belmont 5.0-4.0 with Katie Isenbarger leading the way with three while Anderson and Kayland Jackson each chipped in two.

WKU Volleyball hits the road for another pre-conference tournament this coming weekend and is headed for St. Louis, Mo. The Lady Toppers will take on another challenging field with Marquette and Kansas State both receiving votes while playing at Saint Louis. Action starts Friday night at 6 p.m. CT, with a double feature on Saturday at 10 a.m. and 5 p.m.