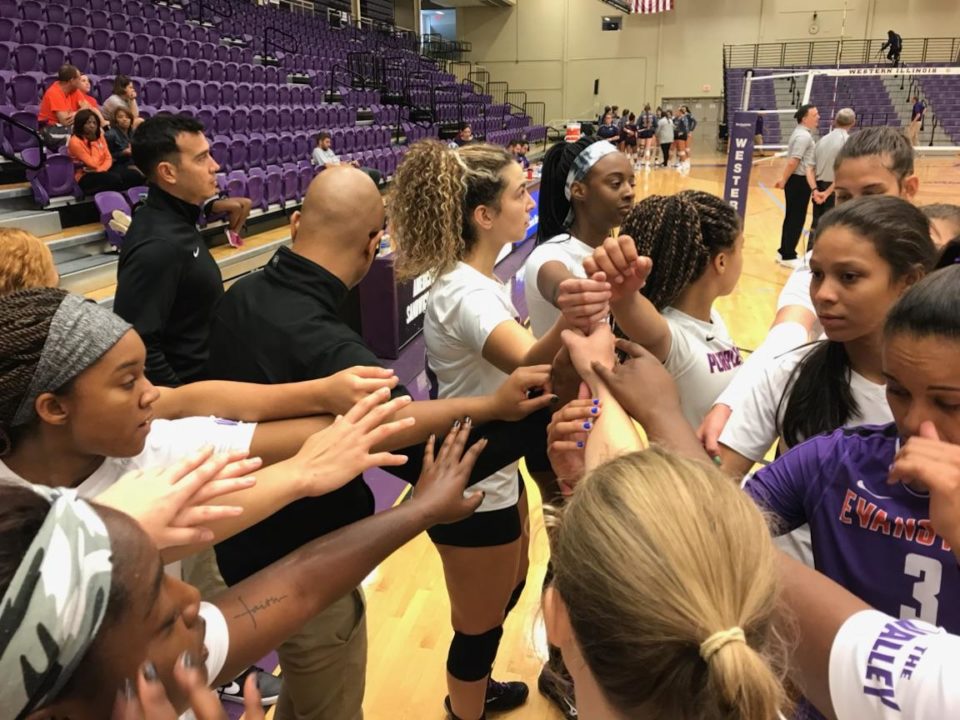 Missouri Valley teams combined to post a 20-11 record during the opening weekend of the 2018 volleyball season despite playing on the road. Drake and Evansville led the pack with 3-0 marks.  Current Photo via Evansville Athletics

Valley teams combined to post a 20-11 (.645) record during the opening weekend of the 2018 volleyball season despite playing zero matches at home. Drake and Evansville are the lone unbeaten teams at 3-0, while Bradley, Indiana State, Illinois State, UNI, Southern Illinois and Valparaiso each suffered only one loss.

Top 25 Victories
The Valley earned its first wins over top-25 opponents this season over the weekend as UNI topped #13 Creighton 3-0 and #5 Kentucky 3-2.

AVCA Top-25
UNI broke into the AVCA Top 25 poll, entering at No. 17 this week (Aug. 27) following wins over previous #5 Kentucky and #13 Creighton over the weekend. The Panthers have been ranked in 117 polls in the history of the AVCA Top 25.

This week, the Panthers host three matches against power-five conference schools receiving votes in this week’s AVCA poll. UNI hosts Iowa State Wednesday night and then hosts Washington State on Friday and Saturday night.  All three matches can be seen on #TheValleyonESPN.

Another Perfect Start
Evansville made its second consecutive appearance in the Leatherneck Invitational and continued its success in the tournament.  In 2017, the Aces started the season with a 3-0 mark in the event with wins over Chicago State, Manhattan and Western Illinois.  This season, the Aces defeated Tennessee Tech, Fairleigh Dickinson and Western Illinois to earn the tournament title.

Drake Wins Sam Houston Tourney
Drake opened the season by winning the Sam Houston State Tournament with a sterling 3-0 record in three-straight, three-set matches. The season-opening title marked the fifth-straight year the Bulldogs have opened the season by winning a tournament. During those five seasons, Drake is 16-2 in season-opening tournaments.

Against 2017 NCAA Field
The Valley won three matches against a 2017 NCAA Tournament team during the opening weekend of play (UNI vs. Creighton & Kentucky; Illinois State vs. Coastal Carolina). This season’s non-conference schedule features 24 teams that appeared in the NCAA field a year ago, including four matches this week.

NCAA-Best Streak Ends
Missouri State suffered its first road loss since Sept. 17, 2016 on Friday, ending a stretch of 22 consecutive wins in opposing gyms. The Bears’ streak was the longest in school history, and the longest active streak in the NCAA, a full10 matches longer than second-place Penn State.

MVC Career Digs Watch
Illinois State senior Courtney Pence moved into fifth place on the all-time MVC career digs list over the weekend.  Pence tallied 65 digs in matches vs. Furman, Coastal Carolina and Georgia. Pence is 55 digs away from passing Wichita State’s Kelly Broussard (2005-08) and 68 digs away from third place on the list.

Carlson Reaches 1,000
Valpo senior Katherine Carlson surpassed 1,000 career digs early in Valpo’s Saturday morning sweep of Iona, as she entered the season with 975 career digs and tallied 22 in Valpo’s first two tournament matches before reaching the milestone against the Gaels. Carlson now sits just 108 kills away from becoming the ninth member of the 1,000 kill/1,000 dig club in Valpo history.

MISSOURI VALLEY CONFERENCE PLAYER OF THE WEEK:
Karlie Taylor, Jr., OH, UNI
UNI junior Karlie Taylor led the Panthers with 53 kills en route to a 2-1 record at the USC Trojan Invite in Los Angeles, including wins over No. 13 Creighton and No. 5 Kentucky. She notched 57.5 points with a .246 attack percentage. She also added four blocks, 31 digs, which is second-best on the UNI squad, and a pair of service aces. She led UNI with 4.82 kills per set. She earned All-Tournament Team honors along with junior setter Rachel Koop. She had her most impressive match of the weekend on the opener verses No. 13 Creighton with 18 kills and an efficient .351 attack percentage for a weekend-high 20 points. Against No. 10 USC, she had 17 kills and a .178 attack percentage against the talented Trojan front line. In the thrilling weekend finale, she notched 18 kills with a .231 percentage and 19 total points.

MISSOURI VALLEY CONFERENCE DEFENSIVE PLAYER OF THE WEEK:
Courtney Pence, Sr., DS, Illinois State
Illinois State senior Courtney Pence started all three matches for the Redbirds this weekend, as Illinois State went 2-1 at the Benson Hospitality Invitational. The senior collected 65 total digs, including a game-high and MVC game-high 34 against Georgia, averaging 5.91 digs per set – the most among defensive players in the Valley through the opening weekend. She was a major piece of an Illinois State defense that held Coastal Carolina to a .071 hitting percentage in the Redbirds’ sweep of the Chanticleers. Pence finished the weekend with four service aces, including two against the Bulldogs, and committed just a single reception error. The Springfield, Illinois, native was one of two Redbirds to be named to the all-tournament team.

MISSOURI VALLEY CONFERENCE FRESHMAN OF THE WEEK:
Makayla Knoblauch, Fr., S, Indiana State
In her first weekend of collegiate play, Indiana State’s Makayla Knoblauch tallied 129 assists and 10.75 assists per set – both marks ranking second in the Valley over the weekend. In addition to serving as Indiana State’s primary setter in her first collegiate action, starting in all three matches, Knoblauch also hit .346 with 10 kills to her credit. She also added 25 digs, 5 total blocks and 2 aces in a well-rounded effort, leading the Sycamores to a runner-up finish at the Purdue Fort Wayne Invitational.