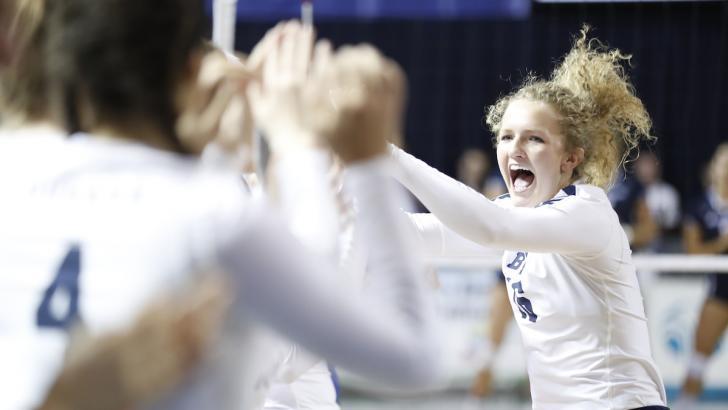 “Tonight was a great team win,” BYU head coach Heather Olmstead said. “We had good energy and were really focused. Lyndie (Haddock) did a great job spreading out the offense and everyone got involved. I’m happy for the team.”

Howard led the Cougars with a career-high tying 12 kills while hitting on a .600 clip. McKenna Miller added nine kills and Veronica Jones-Perry had eight kills. Lyndie Haddock set the team with 34 assists while Mary Lake chipped in 13 digs. Amy Boswell collected a match-high five blocks to go with eight kills and Lacy Haddock contributed six kills in the win.

BYU (21-3, 10-2 West Coast Conference) and Pacific (14-11, 8-5 WCC) stayed within a point of each other to start the first set until a Jones-Perry ace gave the Cougars a 5-3 edge. A pair of kills from Howard forced the Tigers to take their first timeout of the set, trailing 10-7. A Lacy Haddock kill extended BYU’s lead to seven at 16-9 and a 5-0 run increased the advantage to 11, 21-10. Pacific scored the next three-consecutive points, but it wasn’t enough as the Cougars took the set 25-15 on a Howard kill.

A Miller kill gave BYU the first point of the second set en route to an early 4-2 lead. A pair of Tiger errors extended the Cougars’ advantage to four at 8-4, but Pacific scored five of the next six points to tie the score at 9-9. The set remained close from there until a 4-1 Tiger run gave Pacific its first lead of the set at 14-13. BYU retook the advantage with a 7-1 run, capped off by a Miller kill, to go up 23-19. A Howard kill again ended the set for the Cougars, 25-20.

BYU took a 6-2 advantage to begin the third set, capped off by a Boswell kill. The Tigers scored the next three points from blocks, but the Cougars rebounded by collecting the next three points to go back up 9-5. With three kills from Howard, BYU went on a 4-1 rally to extend its advantage to six, 15-9, forcing a Pacific timeout. A pair of Boswell blocks kept the Cougars ahead 19-12, and an ace from her gave BYU a double-digit advantage at 23-13. The Tigers countered with a 6-1 rally, but the Cougars finished off the set 25-19 on another Howard kill.

BYU returns to action on the road Saturday, Nov. 5, at 1 p.m. PDT against Saint Mary’s. The match will be streamed live on TheW.tv. Live stats can be found on the BYU women’s volleyball schedule page.

Lexi Elman and Emily Baptista each posted 11 kills, and Katrin Gotterba led all players with 21 digs.

Whitney Howard led the Cougars with 12 kills while Amy Boswell added five blocks in the win.

Pacific, which entered the week with an RPI of 58 and an extremely strong strength of schedule with six matches against top 15 teams, was looking for a signature victory to impress the NCAA Selection Committee down the stretch. But the Cougars used their depth to go on late-rotation runs of 5-0 in set one, 4-0 in set two, and 6-1 in set three with Lacy Haddock serving.
Down 6-7 in set one, Jessica Diederich served up an ace to knot the score at seven-all. BYU would string together five-straight points behind Haddock to extend their lead 12-7. Pacific would end the Cougar run on an Emily Baptista kill but BYU scored four of the next five points to go up 16-9. Consecutive Lexi Elman kill and service ace cut into the BYU lead, but the Cougars stormed back and take the first set 25-15.

Ashlyn Fleming opened up the Tiger scoring with a kill, and Elman knotted the score 2-2 with a kill of her own in the second set. The back-and-forth continued with Elman bringing the Tigers within striking distance with a kill, making the score 8-6. Pacific got their first lead of the night off another kill by Elman to pull ahead 14-13, but a kill by Amy Boswell tied the score yet again.  The Orange and Black took the lead 16-15 on another Elman kill, the senior’s seventh of the night. After the Cougars broke serve, Haddock held for the Cougars five-point sequence to go up 23-18, and eventually closed out the second set with a 25-20 victory.

It was déjà vu in the third set as Elman once again tied the score 2-2 with a kill. The Cougars would go on a 4-0 run immediately after, but the Tigers came back to pull within one on an Andie Shelton kill and two Cougar attack errors. However, Pacific was whistled for a ball-handling error. BYU surged ahead, as Haddock’s served up the opening half of a 6-1 BYU run to seize control. The Tigers rattled off five-straight coming off two Baptista kills to pull within five, but the Cougars halted the potential comeback and took the deciding third set, 25-19.

The Tigers are back in action this Saturday as they take on No. 7 San Diego in the final regular season home game. Pacific will honor seniors Lexi Elman and Alicja Wilk before the game.