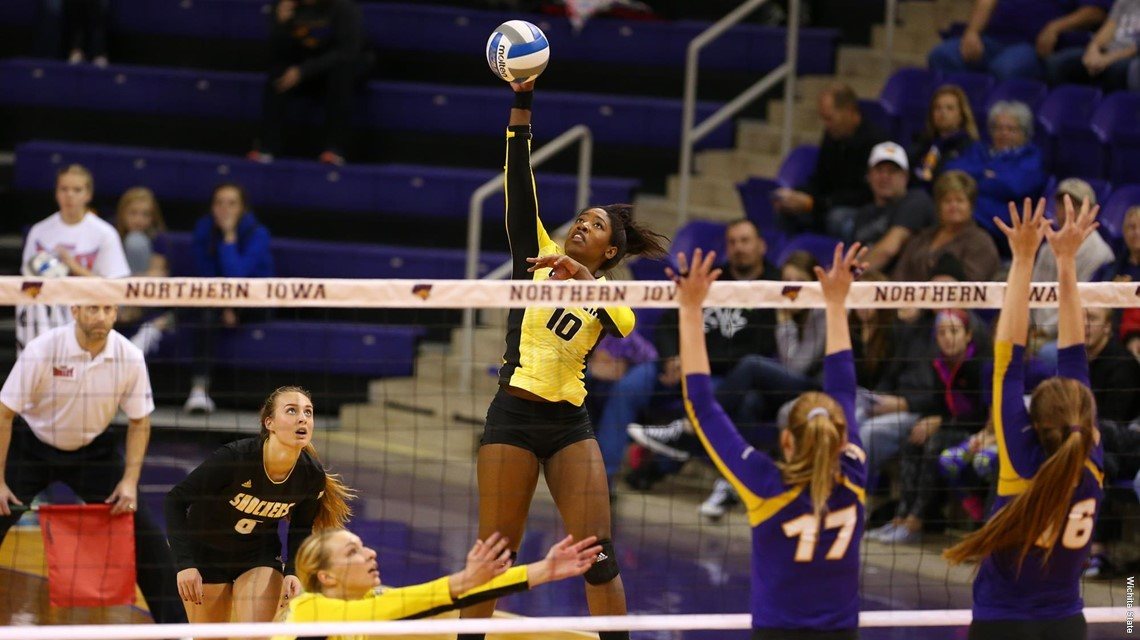 Fifteen blocks and a hitting percentage of over .300 aided Wichita State in a season-opening win over Lipscomb on Saturday.   Archive Photo via Wichita State Athletics

NASHVILLE – Fifteen blocks and a hitting percentage of over .300 aided Wichita State in a season-opening win over Lipscomb on Saturday.

The Shockers hit over .300 in every set for a .337 effort in the match, while holding the Bisons to a .135 effort. Wichita State also outblocked their foes 15-5 and outserved them 3-0. Lipscomb did outdo WSU 48-40 in kills, but could not overcome 31 errors in the match.

Junior outside hitter Tabitha Brown paced the Shockers with 11 kills, while hitting .409 and adding five blocks. Senior outside Mikaela Raudsepp chipped in 10 kills and hit at a .400 clip. Senior middle Abbie Lehman managed nine kills and six blocks. Senior setter Emily Hiebert led the team at the net with eight blocks. Redshirt freshman libero Giorgia Civita pulled up a match-high 15 digs to lead the back court.

Senior right side hitter Chloe Rogers chalked up a match-high 13 kills, while hitting at a .370 clip. Junior outside Carlyle Nusbaum added 10 kills and junior outside Lauren Anderson followed with nine. Senior libero Brittany Thomas paced the defense with 11 digs.

The teams tied 15 times in the opening set, which also saw each team have two set-point opportunities. Neither team led by more than three. An Anderson kill broke a 23-all tie to give Lipscomb the first chance at the set. Raudsepp answered with a kill of her own. Anderson gave the Bisons their second shot, but a kill and block by Hiebert thwarted the effort and set up a WSU chance at 26-25. A Brown kill st up the final point, which came on a Hiebert ace.

Wichita State jumped out to an 14-5 lead in Set 2 as Hiebert put up three blocks and Lehman added two kills and two blocks. The Shockers boosted the lead to 10 at 21-11 as Brown chipped in two kills. WSU closed out a 12-point win on a solo stuff by Hiebert, a Lipscomb miscues and a stuff by Lehman and Raudsepp.

The teams were knotted through 20 serves in Set 3, before Lipscomb pulled ahead 15-12 with three Nusbaum putaways. WSU turned an 18-15 deficit into a one-point edge at 19-18 with a rally including a Brown kill, a block, an ace and a Bison hitting miscue. Down 22-20, Lipscomb turned the tables with a 4-1 run, capped by a block and kill by Maddie Phillips. The Bisons had two chances at the set at 24-23 and 25-24, but a Brown kill and a stuff by Brown and Emma Wright thwarted both. WSU sealed the win two points later as Brown chipped in her 11th kill.

Wichita State used a dominating blocking performance to win its season opener with a 3-0 win over Lipscomb at the LUV Invitational. The Shockers won by scores of 28-26, 25-13 and 27-25.

SET 1:
• Mikaela Raudsepp had five kills and Tabitha Brown four as WSU won the set 28-26
• Neither team led by more than two until the Shockers took an 11-8 lead on a kill from Emma Wright
• The Bisons used three-straight points to go in front 16-15
• Two-straight Lipscomb points led to a WSU timeout at 19-21
• A kill by Raudsepp and a block by Abbie Lehman and Abby Pugh tied the score at 21
• A Lehman kill and Bisons hitting error led to a Lipscomb timeout at 23-22
• The Bisons scored two-straight to reach set point at 24-23
• A Raudsepp kill tied it at 24 and the two teams traded points until the Shockers closed it out with three-straight points, an Emily Hiebert kill, a Hiebert/Emma Wright block and a Bisons hitting error for a 28-26 win

SET 2:
• WSU dominated the second set from start to finish with a 25-13 win
• A 4-0 Shocker run put WSU up 6-1
• Back-to-back Shocker blocks pushed the lead to 9-2
• Kills from Wright and Brown and a Gabi Mostrom service ace gave the Shockers a 17-8 advantage
• WSU closed out the set 25-13 on a block from Lehman and Raudsepp

SET 3:
• WSU scored the final three points for a 27-25 win
• The Shockers took a 4-3 lead on a block by Wright and Chase Jackson
• Lipscomb used a 4-1 run to go in front 14-11
• The Shockers tied it at 18 with a 3-0 run that included a Brown kill, a Hiebert/Lehman block and an Alex Koon service ace
• Chase Jackson’s first career kill gave WSU a 21-20 lead
• The Bisons used back-to-back kills to tie it at 23
• Lipscomb reached set point at 24-23, but a Brown kill tied it at 24
• The Shockers scored the final three points on a Wright/Brown block, Bisons hitting error and Brown kill for the 27-25 win

NEXT MATCH:
• The Shockers take on East Tennessee State at 5 p.m. today in the LUV Invitational.

After getting a big win in its season opener, the Lipscomb volleyball team was hoping to keep that momentum going into a big day of action Saturday afternoon at the LUV Invite. Instead, the Bisons met their match as Wichita State exited Allen Arena with a 3-0 sweep.“You never want to lose, but it was to a quality opponent and I thought we did do some nice things,” head coach Brandon Rosenthal said. “But in the end they made more plays than we did. We have to take this experience and learn from it. It’s kind of hard to hang your head after this one.”

After Wichita State erased an early deficit, the Bisons and Shockers traded nearly every point through the remainder of the opening frame with 16 ties and 10 lead changes. Following kills from Carli Anderson and Lauren Anderson, the Bisons faced set points at 24-23 and 25-24, but each time WSU responded with kills of its own before claiming a 28-26 victory on an Emily Hiebert service ace.

Set two belonged to Wichita State from the onset and it never looked back. The Shockers won the set 25-13, sending the Bisons into the locker room down 2-0.

One bright spot in the first two sets was senior right side Chloe Rogers. The Stillwell, Kansas native recorded 11 kills to just one error. She finished the game with a match high 14 points, 13 kills and a .370 hitting percentage.

The third and final set was a lot like the first with the teams trading blows. The Bisons came out with more energy and built a 16-13 lead midway through, led by Carlyle Nusbaum’s seven kills in the set. With Lipscomb needing one more point to win the set, the Shockers reeled off three straight points to take the set and the match.

“There continued to be plays throughout set three that were a little undisciplined for us and that caught up with us,” Rosenthal said. “You have to credit Wichita State, they are a really solid team and are well-coached. Ultimately they are who we thought they are. That’s the landscape of where we are at right now because if we want these opportunities, we have to do more to take them instead of hoping.”

The Bisons will face their toughest test of the weekend later Saturday night as #24 Arizona brings a lengthy squad into Allen Arena. The Wildcats lost their opening set earlier in the day to ETSU before coming back to win the next three to grab the victory.

“We also know we are going to get another tough opponent in Arizona later tonight, so we have to take what we know on them and combine it with what we just learned to be able to come out and be better as a whole,” said Rogers.