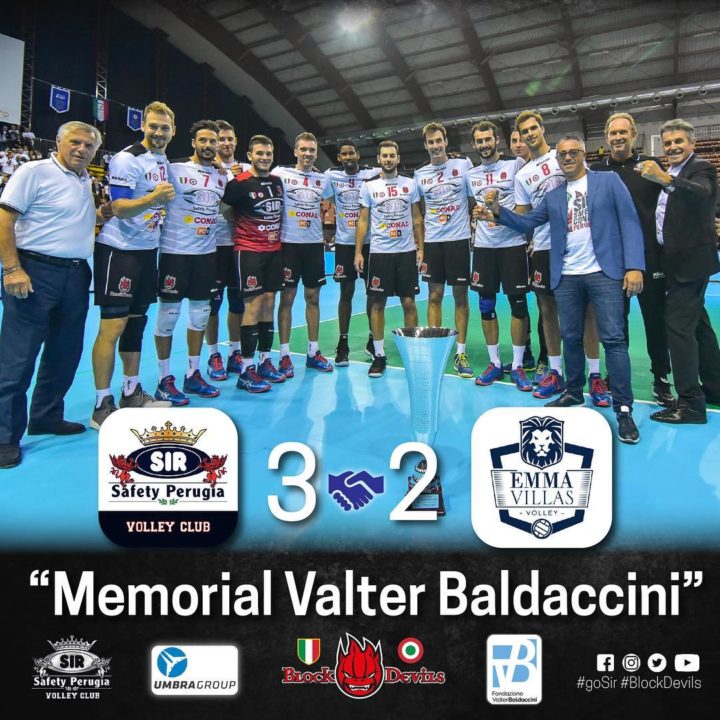 Leon led all players in scoring in his first match for his new side. Current Photo via Sir Safety Perugia

After winning its first Italian Championship in 2018, the club underwent a thunderous shakeup: their superstar, and one of the world’s most popular players, Ivan Zaytsev left in search of a club where he could play opposite (which wound up being league rivals Modena). His departure made room for the club to sign Cuban-born Wildredo Leon, who defected from his native country and in 2019 will, after a long wait, finally be eligible to represent his adoptive home of Poland internationally.

With no country to play for at the World Championships, Leon got his first on-court action with the Block Devils against Emma Villas Volley on Tuesday in the Memorial Valter Baldaccini – a friendly match designed to prepare the team for the upcoming Supercoppa.

Perugia won the match 3-2 (25-21, 19-25, 25-23, 22-25, 15-11) over a much-improved Emma Villas Siena team that signed a number of stars of its own this offseason. Leon made his presence felt immediately, scoring 27 points in the match including at least 4 aces. Leon’s serve was a primary driving force for his old club Zenit Kazan in last year’s Champions League final, where he twice won a set with a clinching ace.

Among the missing players from the match, still away on National Team duty, were Italian outside hitter Filippo Lanza, Italian middle blocker Simone Anzani, and Serbian middle blocker Marko Pordascanin for Perugia; and for Siena,  the Netherlands’ Kay van Dijk, and Iranian setter Saeid Marouf. Siena also got an appearance from one of their big new additions, 22-year old Japanese outside hitter Yuki Ishikawa, who scored 15 in the losing effort.

My first (but yet unofficial) game in my new club Sir Safety Perugia Volley Club ended with a victory💪🏾 Less than 2 weeks till the first official games: the Supercup🏆 #goSir #BlockDevils