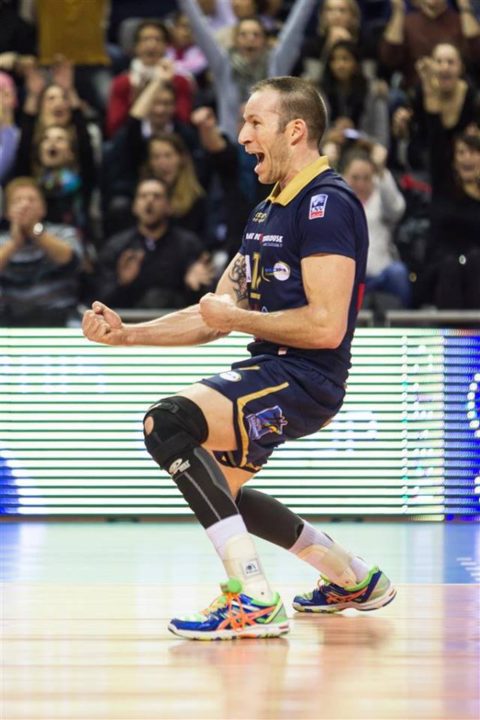 Diogenes Zagonel, affectionately known as Zago, has ended his 10-year run with Spacer's Toulouse. The 36-year old Brazilian outside hitter laced up his sneakers for the final time as Toulouse took on Nice last weekend.  Current Photo via Spacers Toulouse

Diogenes Zagonel, affectionately known as Zago, has ended his 10-year run with Spacer’s Toulouse. The 36-year old Brazilian outside hitter laced up his sneakers for the final time as Toulouse took on Nice last weekend.

The team captain issued a thank you to fans and the club after the match, marking the end of his on-court career.

“I mostly thank Spacer’s Toulouse volleyball club who welcomed me,” Zago said. “I had the honor and pride to defend the colors of this club for 10 years of my life, more than half of my professional career. From the bottom of my heart, I thank all the officials, partners, coaches, medical staff, employees, players, volunteers, the supporters… Thank you, I lived the best moments of my life here, unforgettable moments… A big thank to everyone who contributed to my career, who made me the player that I am and the man I became.”

The attacker was self deprecating and grateful in his goodbye on the team’s website.

“Volleyball is a very technical sport and when you’re young, physical strength doesn’t make much difference,” he said. “Where I’ve been, I’ve never been the greatest. I was neither the strongest nor the most talented. I have always worked hard to surpass myself every day, every workout… to be able to exist and take my place in a sport as competitive as volleyball in Brazil. I had the honor of representing my region and my country in the highest professional-level competitions. Thanks to volleyball I was able to play in different countries and know different cultures. Thanks to volleyball, I met some great people who gave me sporting and human values that shaped my character and personality. A lot of these people were more than just teammates. They were true brothers of hearts that I consider to be part of my family and for whom I will be eternally grateful. hanks to all the clubs I’ve been to, where I’ve had the opportunity to work with great coaches and great players, many of whom are my idols.”

Zago is not leaving Toulouse entirely as he has signed on to assist head coach Stephane Sapinart from the sidelines next year.

Zagonel was awarded the City Medal after his final match.