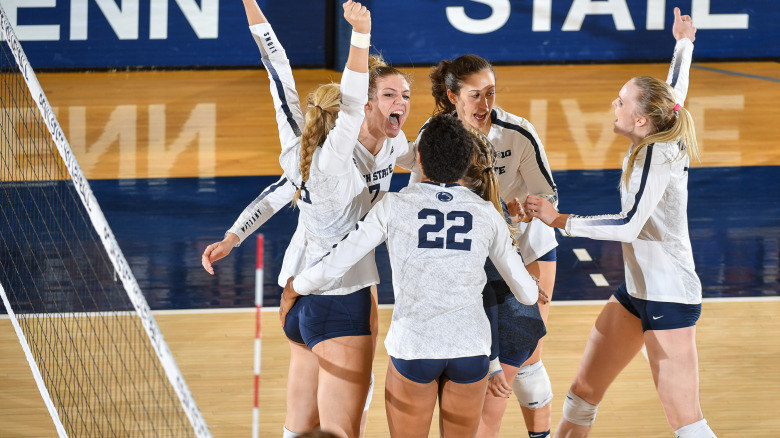 #1 Penn State went into Holloway Gymnasium at #23 Purdue and came away with a hard-fought four-set victory in Big Ten play. Current Photo via Penn State Athletics

WEST LAFAYETTE, Ind. – A sold-out crowd of 2415 at Holloway Gymnasium was treated to top flight volleyball, as #1 Penn State outlasted #23 Purdue, 3-1 (25-22, 25-14, 21-25, 25-10). Aside from two runs that eventually decided the match in sets two and four, respectively, the two volleyball juggernauts went toe to toe throughout. Purdue marched out a new lineup, moving Danielle Cuttino to the middle for the first time in over two seasons, and true freshman Caitlyn Newton received her first collegiate start at the outside hitting position.

Penn State was undaunted by the move, and had four players in double-digit kills on the evening. Ali Frantti had a match-high-tying 15 kills to lead the Nittany Lions, and was joined in double-digits by Heidi Thelen (14 kills, hitting .542), Simone Lee (13 kills, 12 digs) and Haleigh Washington (10 kills, hitting .450). Libero and Hoosier native Kendall White led all defenders with a match-high 19 digs, while Lee was the lone PSU double-double player, adding 12 digs. Washington had a match-high 6 blocks, and Thelen chipped in 5 blocks. Setters Abby Detering and Bryanna Weiskircher had 34 and 20 assists, respectively, to run their 6-2 offense to a .336 attacking clip.

For the Boilermakers, Danielle Cuttino had a match-high-tying 15 kills from the middle position to go along with 3 blocks. Right side Sherridan Atkinson added 11 kills and hit .269 on the night. Ashley Evans had the only double-double for Purdue, running the offense with 35 assists and leading the Boilers in digs with 14. Evans also added 3 blocks to the defense.

Purdue has now lost three straight matches, but those losses were to #3 Minnesota (0-3), #7 Nebraska (1-3) and now #1 Penn State (1-3). Up next for the Boilers is a visit from Rutgers, who has yet to win a Big Ten match this season. Penn State travels down I-65 to Bloomington to face Indiana.

Senior Heidi Thelen (Edgewood, Ky.) put together a career performance for the Nittany Lions as the right side put down a career-best 14 kills, hitting .542 for the match, adding five blocks and four digs.

In a downright scrappy match, the Nittany Lions climbed out to a 2-0 lead.

Through the first two sets, it was the play of Thelen and Ali Frantti (Spring Grove, Ill.) that guided the Nittany Lions to a 2-0 lead heading into the break. Thelen was all-around impressive, putting down seven kills, on a .700 clip, adding four digs, and two blocks through two. Frantti led with nine kills into the intermission.

However, the Boilermakers, who were playing in front of a large home crowd, refused to go away.

In the fourth set, Penn State stepped on the proverbial pedal, hitting .394 in the final set, and they held Purdue to .000.

Frantti led the way with 15 kills, while Thelen’s 14 were second. Simone Lee (Menomonee Falls, Wis.) followed with 13 kills with 12 digs for the double-double. Haleigh Washington put down 10 kills on .450 hitting, with a team-best six blocks.

Kendall White (Indianapolis, Ind.) was a defensive mastermind for the Nittany Lions, scooping up 19 digs, and making endless cover plays. She also held serve multiple times throughout the match to give help the Nittany Lions point-score.

Ashley Evans set the offense to 35 assists while connecting with Danielle Cuttino and Sherridan Atkinson 26 times. Cuttino finished the match with 15 kills and a .273 hitting percentage with three blocks while Atkinson added 11 kills, a .269 hitting percentage and two blocks. The Nittany Lions were able to hold off Blake Mohler, Azariah Stahl and Caitlyn Newton, who made her first collegiate start in the contest. Combined, the trio registered 13 kills on the night.

Evans led the defense with 14 digs and three blocks to complement her performance as Purdue’s floor general. Brooke Peters registered eight digs on the night while Jena Otec and Stahl each added six digs. Atkinson finished with four digs as well. Peters, Otec and Stahl each aced the Nittany Lions once in the match.

The first set was as good of a battle between two of the nation’s best programs as any, as it was tight all the way until Purdue tied the set at 21. Penn State responded to the pressure by winning four of the next five points to take a 1-0 advantage. The second set was also tightly contested until Penn State went off on an 8-0 run after falling behind 9-8 to take a 16-10 advantage and go on to win the set 25-14.

Coming out of the break, Purdue bounced back to take the set 25-21. Stahl fueled a 6-2 run with a pair of kills to close out the set after the Boilermakers were tied with the Nittany Lions at 19. Penn State didn’t allow Purdue to threaten its lead long in the fourth as it used a 9-0 run on top of its 6-4 lead to create a comfortable distance, allowing the Nittany Lions to win the match with a 25-10 score in the final set.