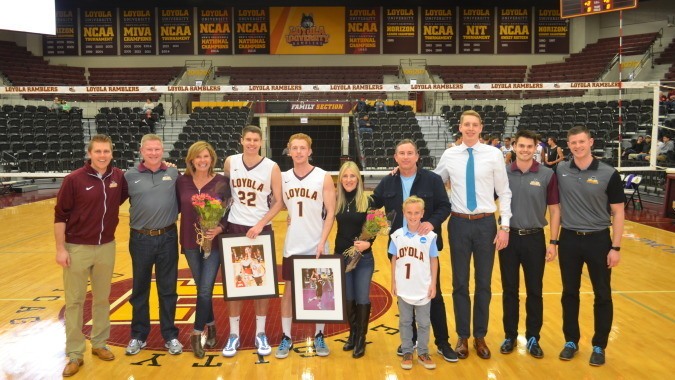 The 10th-ranked Loyola Ramblers rebounded from their 3-1 loss to Grand Canyon on Friday to get a comfortable 3-0 sweep on Saturday. The win was Loyola’s 8th in conference play, which leaves them in a dead-lock with Ball State for the 4th spot, and first round hosting duties, in the MIVA quarterfinals.

The game was Loyola’s last home game of the regular season, which meant it was their senior night. The team honored its 2 seniors, Jagger Kroener and Cole Murray, pre-game, and then came out firing at a .424 pace in the first set (15 kills, 1 error, 33 attacks).

Collin Mahan and Ben Plaisted had 12 kills each for Loyola. Mahan has had double-digit kills in 3 of the last 4 games and hit better than .300 in each of those – including .579 in Saturday’s win. 8 of his 12 kills came in the opening set.

The consistency that carried GCU in the first game of the double-header escaped them on Saturday. They were led by 9 kills each from Shalev Saada (.222) and Ashton King (.444).

How It Happened
After seniors Jagger Kroener and Cole Murray were recognized in a pregame Senior Night ceremony, an inspired Loyola squad came out on fire and hit a blistering .424 (15-1-33) in the opening set to earn a 25-21 victory. Mired in a 16-13 hole following an Antelope block, Mahan accounted for four straight points, the first two coming via kills, and the final pair coming on service aces, to provide the Ramblers with a 17-16 lead. After GCU evened the score at 19 on a Shalev Saada kill, Mahan started a 3-0 run with a kill to allow Loyola to grab control of the set and take a 22-20 lead.

Loyola jumped all over the Antelopes at the outset of the second set, racing out to an 8-3 lead. The Ramblers’ advantage would ballooned to as many as six points (9-3), but Grand Canyon would fight back and evened the score at 22 on a LU service error. However, three straight Antelope miscues allowed the Ramblers to escape with a 25-22 win.

Mahan and Jendryk teamed up for consecutive blocks to close out a 3-0 surge that broke an 11-all tie and gave Loyola the lead for good in set three. Loyola closed out the set, and match, on a 7-3 run to earn a 25-18 win.

Inside The Box Score
– Mahan had another strong performance, hitting .579 (12-1-19), while recording eight of his kills in the opening set.
– Plaisted has now totaled 10 or more kills in 15 consecutive contests. He also pitched in eight digs and a pair of blocks tonight.
– Saada and Ashton King tallied nine kills apiece to lead Grand Canyon.
Up Next
Loyola closes out the 2017 regular season next week with matches at Fort Wayne (April 6) and Ball State (April 8).

One night after playing a balanced and consistent match for four sets, the Lopes struggled to maintain the same level of play. GCU and Loyola battled throughout the first set, and the score was tied at 19 all after a kill from Shalev Saada. The Ramblers then scored six of the next eight points to pull away and win the first set by a score of 25-21.

In Set 2, Loyola jumped out to a quick 9-3 lead. The Lopes battled back to tie the score at 22 all, but the Ramblers pulled away at the end of the set due to three straight errors from GCU. The Lopes were still plagued with errors in the third set as the team committed eight attacking errors with only 11 kills. Loyola capitalized and took the set, and the match, by a 25-18 score.

GCU will play their final regular season match of the year on Tuesday, April 4 against Concordia Irvine. The Lopes will host Senior Day before the 6 p.m. match and honor the five seniors of Fletcher Like, Jacob Thibodeau, Matthew Kinnebrew, Drake Silbernagel, and Michael Milstein.