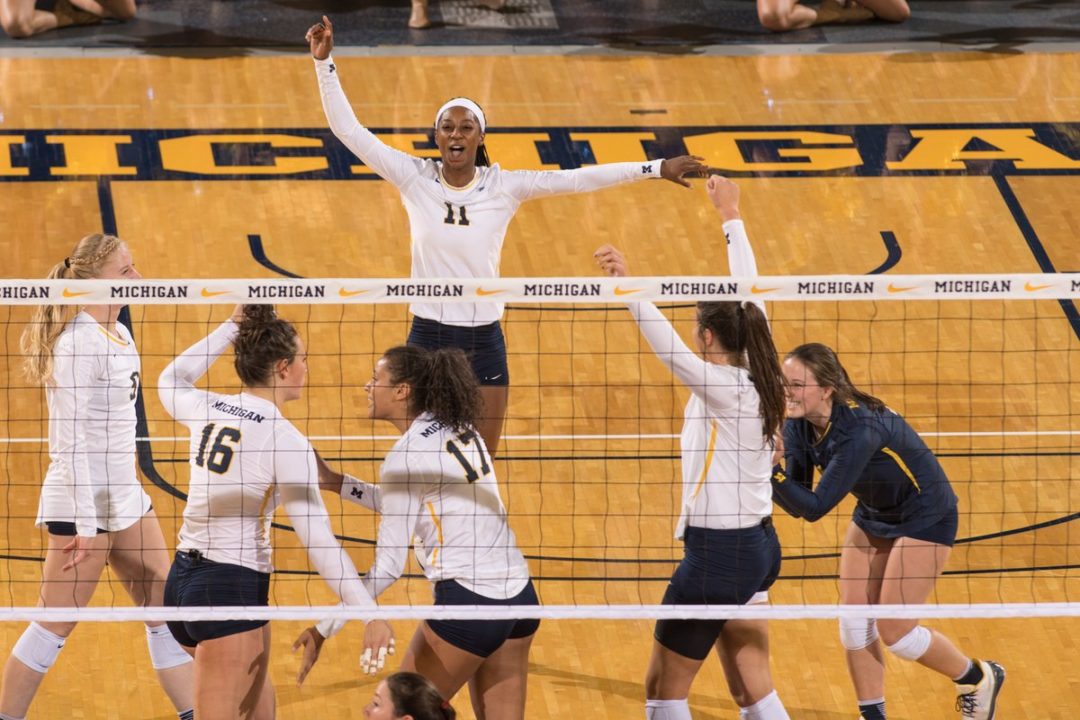 After hitting just over .100 in the first two sets, Michigan turned it around with two near .400 efforts.

Sophomore outside Gia Milana notched a match-high 16 kills to pace Maryland, while freshman middle Jada Gardner and freshman outside Samantha Drechsel chipped in nine apiece. Gardner hit at a team-best .471 clip, while senior middle Hailey Murray put up a team-leading four blocks. Junior libero Kelsey Wicinski was tops in the backcourt with 25 digs.

Four Maryland miscues and two kills by Crocker put Michigan on top 9-3 to start the match. The Terrapins rallied to within two at 12-10 as Milana downed four kills and Murray turned in two blocks. The Wolverines pulled away again with a an 8-1 run, including two aces by Lambert and three Maryland miscues. A stuff by Kieffer-Wright and MacKenzi Welsh gave Michigan a set-point try at 24-16. The Terps saved three points with kills by Drechsel, Murray and Milana, but were done in by a service error.

Two more Lambert aces lifted Michigan to a 4-1 lead in Set 2. Down 7-4, Maryland rallied to take a one-point lead at 10-9 as four different players turned in kills. The Wolverines scored four straight, including a Lambert kill and Kiara Shannon block, to go up 13-10. The Terrapins answered with a 7-2 run, vaulting ahead 17-15. Gardner and Pritchard notched two kills apiece in the rally. After ties at 17 and 18, Maryland surged ahead again with six straight points, two on Samantha Snyder aces and three on Michigan miscues, to earn a set-point attempt at 24-19. A Milana kill evened the match with a 25-19 win.

Skjodt notched three kills and Crocker and Kieffer-Wright downed two apiece as Michigan took a 9-3 lead in Set 3. Skjodt added a kill and an ace and Kieffer-Wright registered two more kills as the Wolverines went up eight at 13-5. Maryland was within six at 17-11, but that sparked Michigan to six of the next eight points and a 23-13 advantage. Two Skjodt kills and two Terp errors guided the rally. A Lambert kill and Shannon block capped the 25-15 victory.

The teams played to a 12-all tie in Set 4, before Michigan managed four straight points, two on Skjodt kills, to earn a four-point cushion at 16-12. Kieffer-Wright notched three putaways to lift the Wolverine lead to six at 22-16. Maryland responded with a 4-0 run, including two Michigan miscues, to pull within two at 22-20. Up 23-21, a Crocker kill and a final stuff by Shannon wrapped up the match.