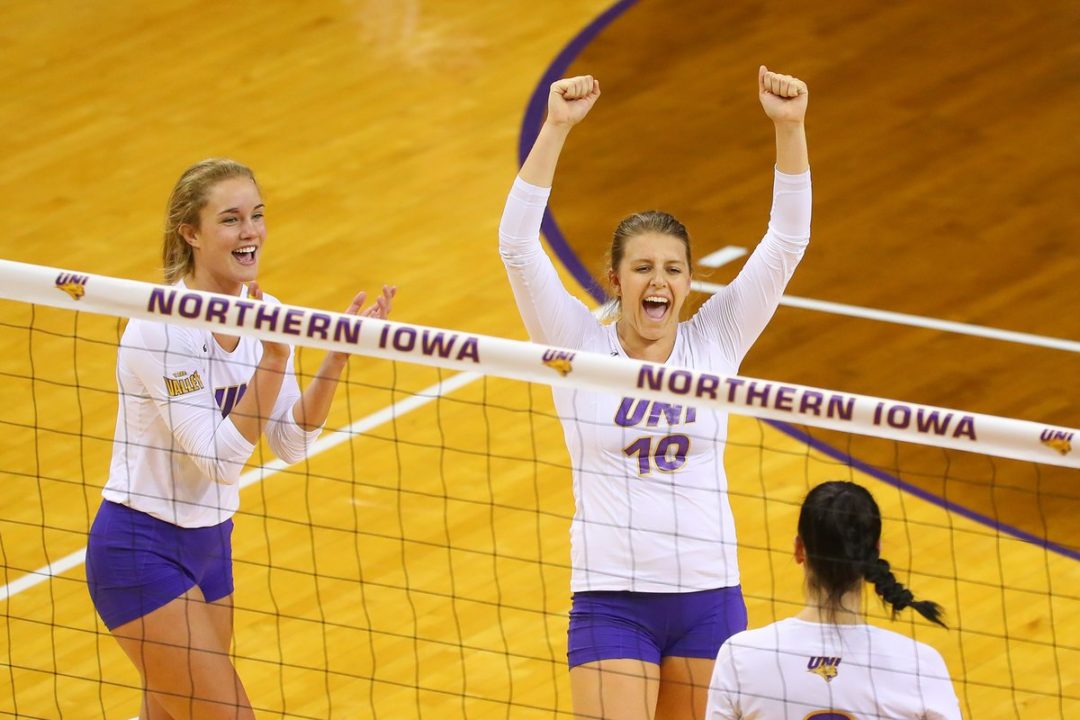 Junior outside hitter Bri Weber notched a 21-kill, 15-dig double-double to guide No. 15 Northern Iowa to a four-set win over Illinois State on Saturday. Archive Photo via Northern Iowa Athletics

Illinois State started the match with a 12-6 run as UNI committed five errors and Holt and Keene downed two kills apiece. The Panthers pulled within four at 16-12, but the Redbirds answered with a 5-0 run, including four straight UNI miscues, to go up 21-12. Northern Iowa scored seven of the next nine points, with three Weber kills and two by Taylor, to make it a four-point game at 23-19. Putaways by Wallen and Machayla Leonard gave the Redbirds the 25-20 victory.

After trailing 7-4 in Set 2, Illinois State rallied to a 13-9 advantage. Four Wallen putaways and two by Holt lifted the Redbirds to the mid-set lead. Northern Iowa scored four straigh, including three Weber putaways, to tie things up at 13. The teams would tie nine more times before the end of the match, the last at 24-all. ISU went up 23-21 with two Holt kills, but UNI countered with a 3-0 run, to earn a set point try at 24-23. A service error thwarted that effort, but a pair of Redbird errors clinched the 26-24 win for the Panthers.

UNI took control early in Set 3, scoring the first five point with four kills and an ISU error. The Redbirds managed four straight points, but couldn’t break through. Up just three at 11-8, the Panthers used a 6-1 run to boost the advantage to eight at 17-9. Two Thomas kills and a kill and an ace by Taylor aided the UNI effort. Northern Iowa closed out the win with an 8-4 run. Two kills and a block by Heather Hook lifted the Panthers to victory.

The teams tied six times to start Set 4, last at 11. An 8-3 run, capped by three straight ISU miscues, gave Northern Iowa some cushion at 19-14, and the Panthers needed every bit of it as the Redbirds cut the margin to one three times, last at 21-20. Two Weber kills made it 23-20 UNI and two by Thomas wrapped up the 25-21 victory and the match.

The No. 22-ranked University of Northern Iowa volleyball team bounced back from an opening game setback and responded by taking the final three sets against the visiting Illinois State Redbirds, 3-1. UNI won by set scores of 20-25, 26-24, 25-13, 25-21.

UNI (14-4 overall, 4-0 MVC) ran its win streak to four in a row behind 21 kills from Bri Weber and 18 kills from Piper Thomas. Karlie Taylor added her team-leading 10th double-double with 13 kills and a match-high 22 digs. Illinois State (9-9 overall, 2-3 MVC) dropped its second match of the weekend in the state of Iowa after falling in five sets to Drake on Friday night.

Illinois State was looking to put a strangle-hold on the match as it built a 13-9 advantage. However, Weber then asserted herself offensively into the match to turn it around for the home squad. Weber went for back-to-back kills as the Panthers ran off four straight to knot the set at 13-13. The Redbirds led 23-21 and were two points away from a 2-0 lead. The Panthers refused to give in and Moriah Johnson tallied a kill and then Abbi Staack turned the fate of the match around with a dig that resulted in a kill and squared the set at 23-23. The Panthers used the momentum to post a 26-24 set victory and even the match at 1-1. Weber posted seven kills on 14 swings in the second set.

UNI built a 19-14 lead in the fourth set and appeared set to win the match handily. Illinois State rallied and cut the lead to 21-20 before Weber turned the tables once again. Weber went for back-to-back kills again and it gave the Panthers a 23-20 cushion. Thomas finished off the Redbirds with two kills of her own and the Panthers claimed a 25-21 triumph.

NOTES: Piper Thomas moved into a tie for No. 8 on UNI’s all-time solo block list with a pair against the Redbirds … Thomas has posted 65 career solo blocks and she is tied with Tricia Mills (1990-1993) … in four league matches, Thomas is hitting .411 with 64 kills and only 11 attack errors (129 total attacks) … Thomas is averaging 4.57 kills per set in MVC play.

The Illinois State volleyball team won the opening set but dropped the next three to No. 22 Northern Iowa as the Redbirds fell to the nationally-ranked Panthers in a Missouri Valley Conference match at the McLeod Center Saturday night. UNI won by scores of 20-25, 26-24, 25-13, 25-21.

“Our team executed the game plan at a high level in the first two sets,” said Illinois State head coach Leah Johnson. “We missed an opportunity to go into the break up two sets. We battled in sets three and four, but offensively, they scored out of system at an exceptional clip and that was the difference.”

Illinois State (9-9, 2-3 MVC) built an early lead in the first set, and then padded it with a four-point run that made it 12-6. After UNI (14-4, 4-0 MVC) cut its deficit to four at 16-12, the Redbirds ran off five-straight points to go up 21-12. The feisty Panthers didn’t give up, and forced a pair of ISU timeouts late, but the Redbirds claimed the opening set with a kill from Machayla Leonard on set point.

The lead ping-ponged back and forth throughout the second set, with 14 tied scores and five lead changes. Illinois State pushed ahead late with a three-point run that gave the Redbirds a 23-21 lead, but UNI answered with a three-point run of its own to get to a set point at 24-23. A Panther service error evened it back up at 24-24, but UNI scored the next two points to even the match at one set apiece.

UNI shot out to a 5-0 lead and never looked back in the third set. Illinois State got within three at 11-8 but the Panthers scored 10 of the next 12 points to make it a 21-10 advantage. The Redbirds never seriously threatened again as UNI went up 2-1 in the match.

The Panthers used a 5-1 mid-set run to take a 19-14 lead in the fourth set. Illinois State pushed back with four points in a row to get within one at 19-18. The teams traded the next four points, but Northern Iowa finished the match by scoring four of the final five points to seal the win.

The Redbirds return home next weekend to host Loyola Chicago on Friday and MVC newcomer Valparaiso on Saturday.