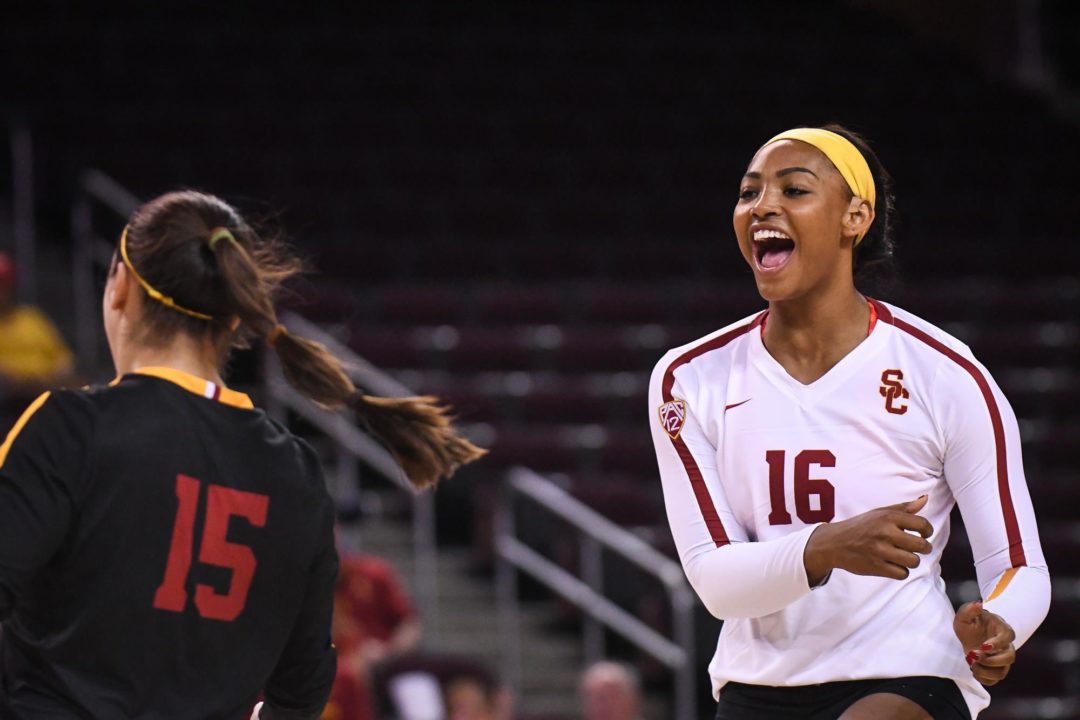 LOS ANGELES – Sophomore outside hitter Khalia Lanier threw down a season-high 23 kills and a career-best five aces to lift No. 16 USC to a four-set win over Washington State on Saturday.

Two Woodford kills and two USC miscues gave Washington State a 5-1 lead to start the match. The Trojans took control with a 14-3 run, including four aces and kills by four different players. Down 15-8, the Cougars scored two of the next three points, but found themselves down 10 soon after following a kill and a block by Lanier. A Brittany Welsh kill put USC up 24-13. An Ashley Brown kill and a block by Claire Martin and Ella Lajos kept the set going for WSU. A service error, however, gave USC the victory.

After a tie at 6-all in Set 2, Washington State scored seven of the next eight points to take a 13-7 lead. Three blocks and two USC miscues aided the run. The Trojans cut the margin to one at 16-15 on an Abercrombie putaway, then rallied from down 19-15 to knot the score at 19 with three Lanier kills. The teams split the next 12 points, with USC earning two set-point tries at 24-23 and 25-24. A kill and a block by Urias gave WSU a chance of its own at 26-25 and a Trojan hitting error finished the 27-25 win.

USC led 7-3 in Set 3 with three Abercrombie kills. The Trojans held the Cougars at bay, boasting at least a two-point advantage the rest of the way. Up 12-10, USC broke the set open with a 13-2 run, cruising to the 25-12 victory. Three putaways by Lanier and Ford and three WSU errors aided the Trojans in the final stretch.

The teams tied nine times in Set 4, last at 11-all. USC ended the deadlock with a 6-1 run, with help from three Lanier kills and an ace. Washington State scored five of the next seven, with kills by Mims, Claire Martin and Lajos to cut the margin to three at 20-17. The Trojans answered with a 5-2 run of its own to close out the match. Dunn and Abercombie combined on a pair of blocks and Lanier and Abercrombie chipped in kills to set up a final stuff by Welsh and Lanier.

The Trojans got a career-best 29.5-point performance from sophomore outside hitter Khalia Lanier. She matched her season best with 23 kills (7e, 52att, .308) and finished with nine digs, three blocks, and a career-high five service aces. Her five aces was the most by a Trojan since All-American Samantha Bricio had at least five in several matches in 2015.

Senior opposite hitter Brittany Abercrombie was the Catalyst to the Trojans’ dominating third-set victory and finished with 13 kills (5e, 34att, .235) to go with three blocks and three digs. Junior outside hitter Alyse Ford tallied 11 kills (4e, 21att, .333) in three sets of action off the bench. Senior opposite hitter Niki Withers had six kills.

The Trojans hit .245 in the match and finished with 61 kills (26att) on 143 swings. Senior setter Reni Meyer-Whalley totaled 32 assists and 11 digs for her fourth-straight double-double. Sophomore setter Cindy Marina had 20 assists, two digs, and three service aces. In the middle, junior Brittany Welsh put in four kills, three blocks, and had an ace while senior Jordan Dunn added a pair of kills, a pair of digs, and seven blocks (two solo). Junior libero Victoria Garrick put up 11 digs to go with five assists and two service aces.

The score of the first set was tied for a third time at six-all, but back-to-back aces by Lanier sent the Trojans rolling. The lead reached 10 points at 20-10 when Lanier rose up to block Casey Schoenlein and earned a crosscourt kill on consecutive points. The teams traded points but it wasn’t enough for WSU as USC closed out a 25-15 win in the opening frame.

The second set was tied 12 times and the lead changed hands five times, but Washington State grabbed the most important lead at the end to come away with a 27-25 win. The Cougars led by as many as six at 13-7, but the Trojans completely erased that deficit and tied the score at 19-all. The teams went back and forth and USC even took set point at 24-23 and 25-24, but the Cougars scored the final three points on a kill by Jocelyn Urias and with a pair of good defensive stances.

The Trojans left no doubt in the third set as Abercrombie scored three kills in the first four rallies. Ford added six kills with just one error and Lanier rose up for five kills to help USC hit .486 (19k, 2e, 35att) in the frame. It was a mere blink of the eye that USC had a 12-10 lead before a 13-2 run closed out the set on three kills by Lanier, 25-12, for a 2-1 Trojan lead in the match.

Though the fourth set started off as much more of a struggle, the Trojans broke the ninth and final tie of the set with a 6-1 run that included two kills and two aces by Lanier and a kill by Withers. The 17-12 lead put Washington State on the ropes, but the Cougars kept fighting. Back-to-back Trojan blocks pushed USC ahead by five again at 22-17 and a crosscourt kill by Abercrombie gave the Trojans match point at 24-19. Lanier and Welsh teamed up to block Schoenlein for the final point of the 25-19 win to seal the victory.

The Women of Troy remain at Galen Center to host No. 6 Washington at 1 p.m. PT tomorrow (Sunday, Oct. 1). The match will be shown live on Pac-12 Networks nationally and on the Pac-12 Los Angeles and Pac-12 Washington channels. It is also USC’s Pink Match, in support of National Breast Cancer Awareness Month. The first 500 fans in attendance get a special promotional t-shirt.

WHY & HOW…
WSU Head Coach Jen Greeny said, “Consistency definitely wasn’t there today but even worse than that was our serving and passing. They were passing almost perfectly in that first set and we did pick it up in the second but our passing was not good at all today. That is going to make us really predictable and we’re not going to win doing that.

“Everybody in the Pac-12 is a good team. I thought we were very flat as well. We were really forcing it to our middles and that was a key to the game today, to get them the ball but not when we have to force it. We just weren’t connecting well at all today and we have to be a lot better tomorrow. Passing is one of those skills that is very mental and not an overly athletic skill.

“I think we have to do a better job of learning from our mistakes, getting better and making some changes a little faster.”

Senior opposite Casey Schoenlein said, “Today’s match was one that we need to just flush from our system. We are going to learn from our mistakes and then get back on the horse for our tough opponent tomorrow. It felt really good to be out on the court again but I definitely have a ways to go before I am playing at the level I was three weeks ago. For right now, I am just going to work through the kinks and find my rhythm with the team again.”